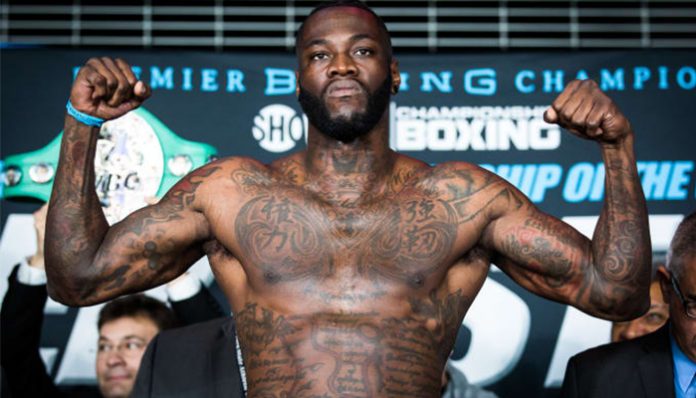 A professional boxer, Deontay Wilder has held the WBC heavyweight title since 2015. The first American to have won the title in nine years, he has been ranked as one of the world’s best active heavyweights by many publications such as BoxRec and The Ring Magazine.

Often referred to as “The Bronze Boxer”, he had earned the nickname after winning a bronze medal at the 2008 Summer Olympics, during his time as an amateur. Prior to that, he had also taken part in the 2007 World Championships, though he ultimately lost to Poland’s Krzysztof Zimnoch.

How lucrative is a professional boxing career? Has he won a decent amount of prize money? How much has he earned over the years? How rich is the 32-year-old boxer? According to various online websites, Deontay Wilder’s current net worth stands at around $16 million. Did he earn the majority of this from the sport? Is he involved with any other projects and ventures? Let’s have a look below.

How did Deontay Wilder Make His Money & Wealth?

Born on October 22, 1985, in Tuscaloosa, Alabama, Deontay Wilder had wanted to pursue a sports career ever since he was young. Unfortunately, his dreams were temporarily halted with the birth of his daughter, Naieya. Ultimately, it wasn’t until his early twenties that he started to box at Skyy Boxing Gym, under the tutelage of Jay Dead.

Within two years, he had won both the US and National Golden Gloves championships. From there, he participated in the Olympic trials, with the hope of being able to represent the United States at the 2008 Summer Games. In the end, he earned himself a coveted spot after defeating Deivis Julio and Jorge Quinones.

Competing as a heavyweight in the Olympics, he successfully beat Mohamed Arjaoui of Morocco and Abdelaziz Touibini of Algeria. Despite his best efforts, however, he eventually lost to Italy’s Clemente Russo during the semi-final. With that, he finished third on the podium for a bronze medal; ultimately it was then that he earned his nickname of “The Bronze Boxer.”

Shortly after the Olympics, he made his professional debut at the age of twenty-three. After a few years of matches, he won his first title at the Memorial Sports Arena after knocking out Kelvin Price. Following that, he continued to climb up the ranks in the early 2010’s. Eventually, in 2014, he won the WBC Heavyweight title- a victory that allegedly earned him $1 million.

Since then, he has fought against numerous opponents including Chris Arreola, Gerald Washington, and Bermane Stiverne. With every win, he brought home a significant amount of cash; for instance, he had earned $900,000 from his win against Washington last year. As if that wasn’t impressive enough, he later went on to receive a career-high $2.1 million for his fight against Luiz Ortiz in December 2017.

Considering all that’s been said above, it’s obvious that most of Wilder’s income comes from his success as a professional boxer.

As far as other ventures go, he has appeared in a number of television programs over the years such as Wild ’N Out, Donnie After Dark, and Highly Questionable. Most recently, he was featured on the One O’Clock News earlier this year.

Deontay Wilder has been married to his wife Jessica Scales-Wilder since 2009.

Does Deontay Wilder Have Any Children?

Did Deontay Wilder Go to College?

What is Deontay Wilder Famous For?

Deontay Wilder rose to fame after winning the WBC heavyweight title in 2015. In 2008, he also gained fame as an amateur after winning a bronze medal at the Summer Olympics.

According to his Twitter bio, Deontay Wilder currently lives in Tuscaloosa, Alabama- presumably with his wife and children. We do not have any pictures of his abode at this time.

What Kind of Car Does Deontay Wilder Drive?

We do not have any information on Deontay Wilder’s vehicle at this time.

How Much Money Did Deontay Wilder Make Last Year?

Information on Deontay Wilder’s 2017 earnings is not available.

Most recently, Deontay Wilder won against Luis Ortiz at New York City’s Barclay Centre on March 3, 2018. In doing so, he successfully retained his WBC heavyweight title for the seventh time.

Want to keep up with the boxer? If you’re a fan, why not give him a follow on social media? You can find Deontay Wilder on Twitter and Instagram at @BronzeBomber. Alternatively, you can also show your support by liking his official Facebook fan page here.