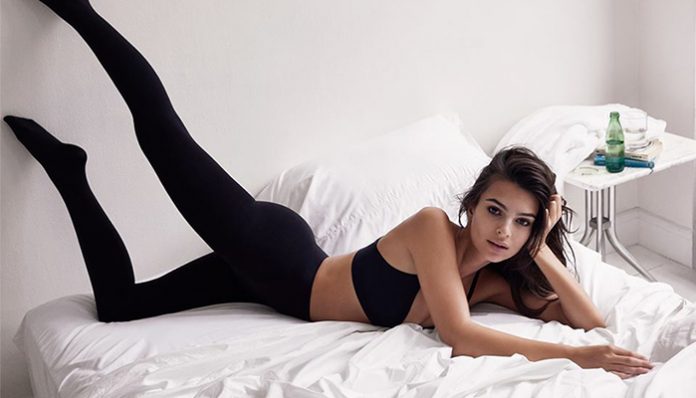 An American model and actress, Emily Ratajkowski rose to fame after appearing in Robin Thicke’s Blurred Lines MV in 2013. Since then, she has worked with numerous brands including Paco Rabanne, The Frye Company, DKNY, and Miu Miu.

As far as acting goes, she has appeared in several films over the years including We Are Your Friends, Gone Girl, Entourage, and I Feel Pretty. Most recently, she co-starred in a thriller film called, In Darkness, which came out earlier this year. In terms of television, she has played a few roles in the series iCarly, The Spoils Before Dying and Easy.

How well off is the brunette? How much does she make from her various endeavors? How rich is she? According to sources, Emily Ratajkowski has an estimated net worth of $6 million as of 2018. Where did she earn the bulk of this amount from? Hopefully, we’ll be able to answer this question by taking a closer look at her career below.

How did Emily Ratajkowski Make Her Money?

Born on June 7, 1991, in London, England, Emily Ratajkowski grew up in the beach city of Encinitas, where she caught the acting bug at an early age. Obsessed with theatre, she often staged shows for her family at home. A few years later, she landed her first formal role in a stage adaptation of The Little Match Girl.

With encouragement from her acting coach, the brunette later signed with Ford Models at the age of fourteen. From there, she modeled for a number of prints including those for Nordstrom and Kohls. Within a year, she had begun to audition for various television roles. In 2009, she made her small screen debut as a minor character in the teen sitcom, iCarly.

Still, it wasn’t until she was featured in Robin Thicke’s Blurred Lines music video that she rose to prominence. Despite it having been a controversial MV, the song had become a number one hit in many countries including Canada, the UK, and New Zealand. A few months after she appeared in the video, Ratjkowski was named “Woman of the Year” by Esquire magazine. Unfortunately, it’s not known how much she was paid for the feature.

With her sudden rise to fame, she received a few supporting roles in major films such as Gone Girl and Entourage. Later in 2015, she played a protagonist for the first time in the musical drama We Are Your Friends, opposite of Zac Efron. In support of the release, she also embarked on a promotional tour across North America and Europe. As far as upcoming projects, she is currently filming for Welcome Home, which will come out later this year.

In addition to her acting career, she has also enjoyed success as a model. For instance, she has graced the covers of many magazines such as Vogue Germany, Vogue Espana and Marie Claire with Irina Shayk, Stella Maxwell, and Lily Aldridge, to name a few.

In terms of other ventures, she was recently enlisted to design a bag collection for the French fashion brand, The Couples.

Earlier this year, it was announced that she had gotten married to Sebastian Bear-McClard, an actor and producer, after having dated for several weeks.

Does Emily Ratajkowski Have Any Children?

No, Emily Ratajkowski does not have any children.

Did Emily Ratajkowski Go to College?

Yes, she did. In 2009, she briefly attended the University of California, Los Angeles for a year, before deciding to pursue modeling full-time.

What is Emily Ratajkowski Famous For?

Emily Ratajkowski rose to fame after being featured in the MV for Robin Thicke’s Blurred Lines in 2013. Since then, she has received numerous acting and modeling opportunities, all of which have served to boost her popularity.

Emily Ratjowski currently lives in London, England. We do not have any further details at this time on her location.

What Kind of Car Does Emily Ratajkowski Drive?

Details on Emily Ratjowski’s vehicle are not available.

How Much Money Did Emily Ratajkowski Make Last Year?

Unfortunately, details on Emily Ratjowski’s annual salary is not available at this time.

Earlier this year, she co-starred in the comedy flick, I Feel Pretty alongside Amy Schumer. In March 2018, it was also announced that she had been cast as a series regular in a new television series titled Bright Futures.

Want to keep up with the model/actress? How about following her on social media? You can find her on Twitter and Instagram at @Emrata. For the latest news and announcements, you can also check out her official website at emrata.com.