Nestled in the middle of the up-and-coming neighborhood of Eagle Rock, California is Capri, an Italian restaurant owned by the Thiel twins. The Thiel twins are brothers Jeff and Jim. How they got into the restaurant business is they used to come to the place all the time, so they offered to buy it. At first, they were more in love with the premise of free pizza. However, the twins are like two overgrown boys according to waitress Mia. They’re kind of immature and just doing what they know, but it’s not working.

While everybody is entertained by their childishness, it is a restaurant and people are there to serve food and work. Unfortunately, pizza cook Darian feels that the two brothers can’t cook. As an aside, the footage is shown that customers continue to send back the lasagna with complaints that it’s overcooked. The food that comes out from the kitchen frankly looks terrible. It’s embarrassing, and it’s like nobody cares. In short, Jim and Jeff are lazy.

Lazy, according to Darian, is an understatement. The twins’ priority is to do as little work as possible. The two do understand that there’s something that they’re doing wrong, but they’re not sure what it is. The financial situation “hit the pooper,” and the two brothers are broke. They’re behind on bills by several months and they need help badly. If they don’t change things, the doors will close quickly. The Thiel twins have their fingers crossed that Gordon will be able to help them. 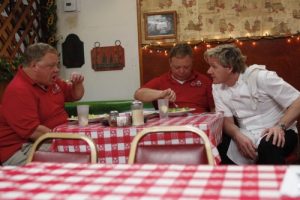 Gordon has traveled to the tiny town of Eagle Rock and stumbles upon Capri Italian Restaurant. The front looks boarded up, dilapidated, and downright depressing. However, there is a little Italian chef (use your imagination, it’s very stereotypical) on top of the sign that wears an apron which blows in the wind. The restaurant sign reads “opened since 1963,” and Gordon jokes, “closed since 1963?”

Gordon comes in through the dark exterior of the restaurant to a completely empty dining room. One of the Thiel brothers (Jeff) greets Gordon. Gordon points out that things look to shut down from the outside, but Jeff says they’re currently closed and open at 4:00 for dinner. Jeff calls out for Jim to come to meet Gordon. While Jeff heads back to fetch Jim, Gordon looks around the restaurant. The entire thing is dreadful and dated and creates a very old time-y atmosphere.

Jeff comes up to Jim and instructs him just to walk up to Gordon and ask how he’s doing. They want to mess with Gordon a little since the two are identical twins. He walks up and Gordon asks Jim if the brother is unavailable, as he is operating under the presumption that this is still Jeff. Gordon instructs Jeff to go get Jim, but the two brothers emerge and stand side by side. Gordon, frankly, is flabbergasted.

Gordon points out that the two are wearing the same sneakers, and there is even a flour spot on their aprons in the exact same spot. He then asks the twin brothers who is in charge, and the two-point at each other and goes “he is.” They refocus and Jim is in charge. He’s worked here longer than Jeff has. Gordon asks about the “opened since 1963,” but Jim explains that they only bought it 14 years ago.

He then asks the brothers why they aren’t open for lunch. According to Jim, the Capri is never open for lunch which is good since he would rather go on the computer, watch TV or play poker. The problem is that for lunch, they’d have to get a new staff. They haven’t even attempted this. Jim just isn’t ready to jump into lunch yet. Capri is open Wednesday through Sunday for dinner. What’s wrong with Monday through Tuesday? The brothers don’t have an answer.

Capri, in short, is closed longer than they’re open. Gordon already looks exhausted, so he sits down for a bite to eat. Gordon plays with the menus, which are flimsy plastic. He manages to tear a piece of the plastic off, and even the paper inserts of the menu are crinkled at the top. Gordon complains that he can’t even read the menu through the plastic since it’s so dirty. His first impressions are definitely not good. He takes a few minutes to read over the menu, finally getting some peace and quiet from the brothers.

Jeff doesn’t know what Gordon expected, but this is a more down-to-earth place. Colleen will be Gordon’s server for the day, and she has been working at Capri for nine and a half years – a full decade. Gordon lets a curse slip. He asks when the last time something was updated, but Colleen says that nothing has been updated. In fact, the wallpaper has been up for more than 35 years. Gordon skims through the menu and eventually orders a meatball sandwich (with meatballs made from another company, not in the kitchen), the chicken scarpello, and a Capri colossal pizza.

Jeff already looks exhausted in the kitchen from the order. He begs for Jim to get him the extra large dough, and the two brothers adopt a grim attitude. While the food cooks, Gordon pokes around the restaurant and reveals bits of dried sauce in the seats, outdated furniture, tape everywhere on the carpet, and dust and dirt all over the place. He even finds pasta that has been sitting out for 20 years.

Gordon asks Jim when the place was last cleaned, but Jim admits that he was responsible for the cleaning. Gordon heads to the bathroom to wash his hands. The meatball sandwich is prepared from frozen meatballs and cube cheese. It comes to Gordon’s table and is a very depressing and soggy sandwich. From the dining room, you can hear the sound of the meat tenderizer banging against the chicken for the pasta. 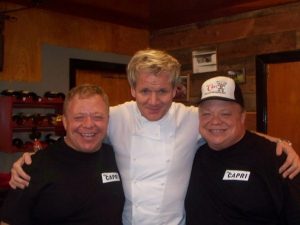 The Capri colossal pizza is served next. It’s a pizza dish served with virtually everything on it. Colleen explains that it has a little bit of everything except for anchovies, and Gordon only manages to stomach one bite. There’s just too much crap and gunk on top of it. The chicken scarpello is the final dish to come to Gordon’s table. In his words, “it looks dull.” He takes a bite of the chicken, but something just isn’t right. It smells, and he asks Colleen if it’s fresh. She can’t answer, so he sends her back to ask how old the chicken is. Neither Jeff or Jim is certain exactly how old the chicken is, but they did just pull it out of the freezer yesterday.

Capri Italian Restaurant may be one of Kitchen Nightmares’s greatest success stories. Not only is the place still open, it has an incredible 4-star review across more than 450 reviews on Yelp. The food, service, and interior decoration have all been redone and now the place is one of Los Angeles’s hip dining joints. They even offer delivery and ordering online! On Capri’s website, in big bold unmissable letters, they proudly proclaim that they continue to serve homemade meatballs.