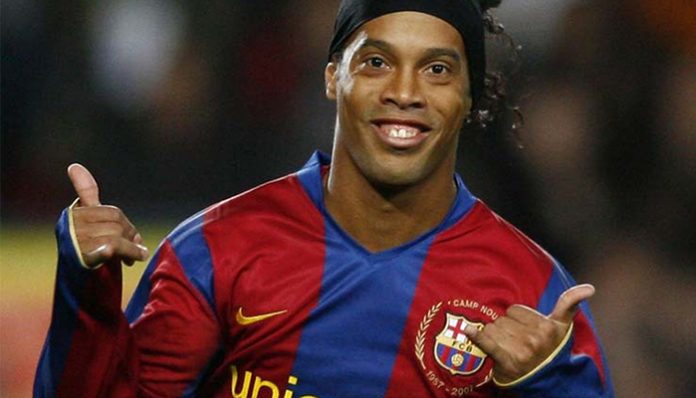 A Brazilian footballer, Ronaldinho played professionally for many years before retiring in early 2018. Renowned for his creativity and technical skills, he has won numerous awards including two FIFA World Player of the Year titles. In fact, he is often considered one of the best players of his generation. In 2008, he even helped Brazil take home a bronze medal at the Summer Olympics.

As a senior, he played for several teams including Gremio, Barcelona, Flamengo, and Atletico Miner, to name a few. Prior to his retirement, he had joined the Delhi Dragons in the Premier Futsal League, with whom he scored 16 goals.

How well-off is the newly retired athlete? How much did he bring home as a professional footballer? How wealthy is the 38-year-old? To answer this question, it’s said that Ronaldinho has an estimated net worth of $90 million as of 2018. Where did the bulk of this money come from? We’ll be taking a look below- stick around if you’re interested.

How did Ronaldino Make His Money & Wealth?

Born on March 21, 1980, in Porto Alegre, Brazil, Ronaldinho grew up in the Guaruja section, where he developed an interest in football at a young age. By the time he was eight, it was obvious to those around him that he was naturally talented in the sport. Growing up, his inspirations included Diego Maradona, Rivelino, and Romario. After many years of playing with the youth squad, he made his senior debut at the age of eighteen.

For the next three years, he played with the Gremio squad. From there, he signed a $5.8 million five-year contract with Paris Saint-Germain in 2001. During his time with the French team, he scored 17 goals. Despite having received praise for his performance, however, he decided to leave after they had failed to qualify for competition in Europe.

The following season, he was signed to FC Barcelona for $35 million. By 2004, Ronaldinho had won his first league title; not only that but his achievements had earned him his first FIFA World Player of the Year award. After his contract expired in 2008, he accepted a two-year extension with the condition that he’d be able to leave the team if a club were to offer more than $113 million for him.

For the second half of his professional career, he played for a number of teams including the Flamengo, Milan, Queretaro, Atletico Miner, and Fluminense. By the mid-2010’s however, it was obvious that his presence wasn’t as strong as during his prime. Realizing that he was unable to perform as good as he’d wanted, he eventually terminated the deal with Fluminense in 2015.

Following that, he joined a futsal team in India together with Michel Salgado, Paul Scholes, and Ryan Giggs, among a few others. Two games later, he was made the ambassador of the 2016 Summer Paralympic Games, which were held in Rio de Janeiro.

Fast forward to earlier this year, and it was confirmed that he would be retiring from professional football. One of his last games was as a member of the Delhi Dragons with the Premier Futsal League.

Earlier this month, Ronaldinho surprised the world with the announcement that he will be marrying two women named Beatriz and Priscilla in August. According to reports, he had started to date Priscilla in2012 and Beatriz in 2016.

Does Ronaldinho Have Any Children?

No, Ronaldinho does not have any children.

Did Ronaldinho Go to College?

Yes, he went to the Colegio Santa Teresa de Jesus.

What is Ronaldinho Famous For?

Ronaldinho is best known for his professional football career. Over the years, he has played for several teams including the Gremio, Barcelona, Flamengo, Queretaro, and Fluminense.

Where Does Ronaldinho Live now? Pictures of Ronaldinho’s House

As far as we know, Ronaldinho currently lives in his native Brazil. At this time, that’s all the information that we have available.

What Kind of Car Does Ronaldinho Drive?

Details on Ronaldinho vehicle are not available.

How Much Money Did Ronaldinho Make Last Year?

At this time, we do not have any information on Ronaldinho’s annual salary.

As mentioned earlier, it was announced that the former football player will be marrying his two fiancees, Priscilla and Beatriz this upcoming August. A surprise to everyone, he has reportedly been dating the two girls for a few years.

Want to keep up with the star’s activities? If so, you’ll probably want to follow him on social media- you can find Ronaldinho on Twitter at @10Ronaldinho or on Instagram at @Ronaldinho. On Facebook, you can also join 34 million others in liking his official fan page here.