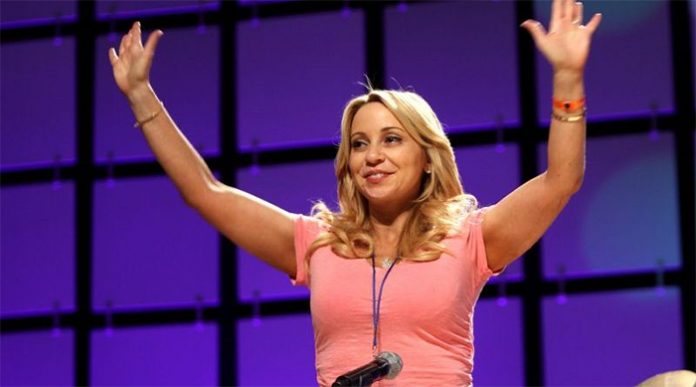 An award-winning actress, Tara Strong has done voice work for numerous animated titles including The Fairly OddParents, The Powderpuff Girls, Teen Trans and Drawn Together to name a few. Outside of television, she has also lent her voice to several video games such as Final Fantasy X, and Mortal Combat X.

Though voice acting is her primary focus, the blonde has made appearances in several live-action titles. For instance, she has appeared in the television series T and T, Forever Knight, Family Pictures, and The Wonderful World of Disney, to name a few. Most recently, she played a small role in the 2017 film, A Very Merry Toy Store.

How well-paid is she in the voice-acting industry? How much has she earned from her work on television over the years? According to sources, Tara Strong has an estimated net worth of around $10 million. Let’s take a look at where most of her income comes from below.

How did Tara Strong Make Her Money & Wealth?

Born on February 12, 1973, in Toronto, Ontario, Tara Strong caught the acting bug at the age of four, after volunteering for a school production. Wanting to take her interests further, she later joined the Yiddish Theatre, with whom she performed with throughout grade school (despite not knowing the Yiddish language). Eventually, at the age of thirteen, she landed her first professional role in the play, The Music Man.

Years later in her late teens, she appeared in a few TV shows including Hello Kitty’s Furry Tale Theatre, T. and T. and Mosquito Lake. Wanting to take her acting career further, she eventually moved to Los Angeles in 1994. Not long afterward, she began to land voice-acting roles in series such as Gadget Boy and Heather, The Twisted Tales of Felix the Cat, Stickin’ Around and X-Men.

Over the next decade, she lent her voice to numerous main characters in the animated shows 101 Dalmatians: The Series, The New Batman Adventures, Detention, Rugrats, and The Powderpuff Girls, to name a few. By the early 2000’s, she had amassed dozens of credits to her name.

In terms of recent projects, she has been lending her voice to the TV series Unikitty!, DC Super Hero Girls, My Little Pony: Friendship is Magic, The Adventures of Rocky and Bullwinkle, and Teen Titans Go!. Later this year, she will also be featured in the animated film, Teen Titans Go! To the Movies as the voice of Raven.

Considering the extensive work that she’s done as a voice actress, it’d only make sense that it’s her primary source of income. Having said that, it has not been revealed how much she makes per role. Still, taking into consideration the awards that she’s won (including more than one Daytime Emmy Award nomination), her salary is likely nothing to scoff at.

Outside of acting, Strong has also been featured in television programs such as Thomas Sanders, King of the Nerds, I Know That Voice, and Hollywood and Hyland, to name a few.

Yes, she has been married to Craig Strong, a real estate agent since 2000.

Does Tara Strong Have Any Children?

Did Tara Strong Go to College?

No, as far as we know, Tara Strong did not go to college.

What is Tara Strong Famous For?

Tara Strong is best known for having voiced numerous characters in the shows The Powderpuff Girls, Rugrats, The Fairly OddParents, and Teen Titans, to name a few.

Tara Strong and her family live in Los Angeles, where they run a business called VoiceStarz, a company that teaches individuals how to get into the voice-over industry. We do not have any pictures of her abode at this time.

What Kind of Car Does Tara Strong Drive?

Details on Tara Strong’s vehicle are not available.

How Much Money Did Tara Strong Make Last Year?

At this time, we do not have any information on Tara Strong’s annual salary.

Currently, she voices several characters in the animated series DC Super Hero Girls, Unikitty!, Young Justice and My Little Pony: Friendship is Magic. Later this year, she will also be making a voice-over appearance in the film, Teen Titans Go! To the Movies.

Want to know what she blonde is up to? If so, be sure to follow her on social media- you can find Tara Strong on Instagram and Twitter at @TaraStrong. On Facebook, you can also check out her official fan page for the latest news and announcements (don’t forget to also show your support by liking her page!).