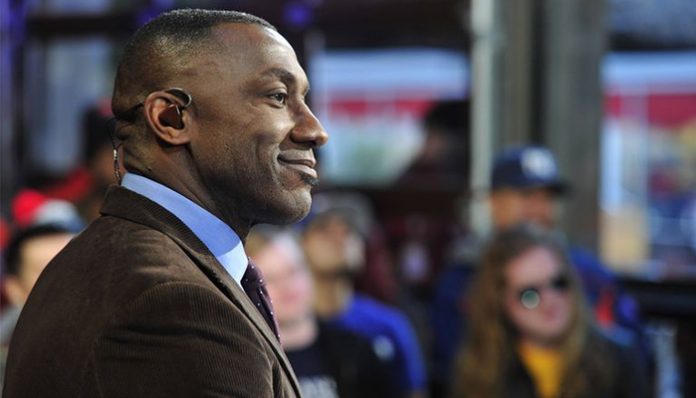 A former NFL star, Shannon Sharpe played for both the Baltimore Ravens and the Denver Broncos during his professional football career. After over a decade of playing as the tight end, he announced his retirement in 2003. At the time, he was with his original team- the one that he had started out with, the Broncos.

Since then, he has not only worked as a sports analyst, but he has also hosted a few television programs such as Skip and Shannon: Undisputed, and The NFL Today, the former of which is still airing as of 2018. Some of his other TV credits include Fox and Friends, Garbage Time with Katie Nolan, American Dad!, and Rome Is Burning.

How much did he make from his NFL career? How much did he receive from his contracts with the Ravens and Broncos? How wealthy is the 49-year-old today? To answer this question, it’s said that Shannon Sharpe’s current net worth is around $12 million.

How did Shannon Sharpe Make His Money & Wealth?

Born on June 26, 1968, in Chicago, Illinois, Shannon Sharpe grew up in Glennville, Georgia, with his older brother, Sterling, who’s also a former NFL star. After completing high school, he had gone to Savannah State University, where he earned a bachelor’s degree in criminal justice. During his time there, he not only played football but was also active in track and field and basketball.

At the age of nineteen, he was selected by the Denver Broncos during the 1990 NFL draft. In the end, he played for the team for nine years, during which they won two championship rings at the Super Bowl. From there, he joined the Baltimore Ravens in 2000, with whom he won the Super Bowl XXXV. Eventually, after a two-year stint, he returned to the Broncos in 2002. Ultimately, he played there until 2003, after which he announced his retirement.

Considering his accomplishments, there’s no question that Sharpe had earned a significant amount of income from his many years with NFL. To be more specific, it’s said that he earned an annual salary of $755,000, according to Fox Sports. For his accomplishments, he was inducted into the Professional Football Hall of Fame in the summer of 2011.

Like most professional athletes, he later worked as a sports analyst for CBS sports; among the shows that he appeared in are The NFL Today, Spring Halftime Report and The Subway Postgame Show, to name a few. Speaking of television, he has also been co-hosting a sports talk show titled, Skip and Shannon: Undisputed since 2016. Unfortunately, it’s not known how much he’s paid for the said roles.

In terms of other ventures, he has also worked as a columnist for FitnessRX For Men magazine. In addition to that, he had also made a brief appearance in the animated sitcom, American Dad! in 2011. As far as we know, that’s the only acting role that he’s taken on to this day.

While he isn’t married, Shannon Sharpe has been in a relationship with fitness instructor Katy Kellner for quite some time.

Does Shannon Sharpe Have Any Children?

No, as far as we know, Shannon Sharpe does not have any children.

Did Shannon Sharpe Go to College?

Yes, he went to Savannah State College, where he studied criminal justice. During his time there, he played basketball and football.

What is Shannon Sharpe Famous For?

Shannon Sharpe is perhaps best known for his NFL career with the Denver Broncos, with whom he played with for over a decade (albeit with a break in between).

Since retiring, he has pursued a successful career as a TV host and sports analyst.

Unfortunately, we do not have any information on Shannon Sharpe’s location at this time, nor do we have any pictures of his abode.

What Kind of Car Does Shannon Sharpe Drive?

We do not have any information on Shannon Sharpe’s vehicle at this time.

How Much Money Did Shannon Sharpe Make Last Year?

Information on Shannon Sharpe’s 2017 earnings are not available.

First and foremost, he is currently still hosting the talk show, Skip and Shannon: Undisputed with Skip Bayless, which premiered on television in 2016. Aside from that, he recently also appeared on the programs Fox and Friends and The Herd.

Want to follow the former NFL star? If so, you’ll be happy to know that Shannon Sharpe is active online- you can find him on Twitter at @ShannonSharpe or on Instagram at @ShannonSharpe84. On Facebook, you can also like his official fan page here.