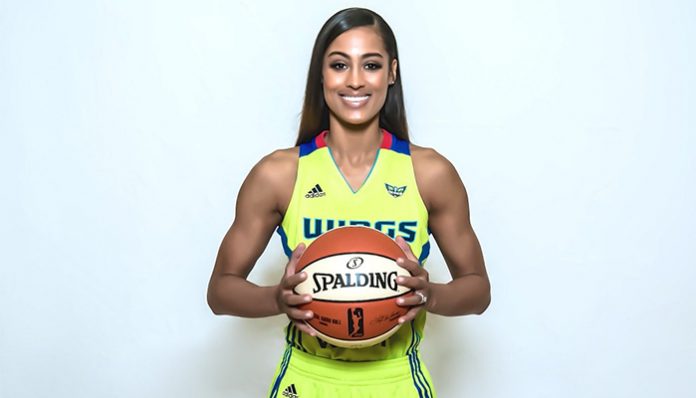 A professional basketball player, Skylar Diggins-Smith is best known for her career with the Dallas Wings. Drafted by the Tulsa Shock in 2013, she has been involved with the sport ever since her teens. In high school, she won many awards including the Gatorade Female Athlete of the Year and National Gatorade Player of the Year titles.

In the past, she was also a member of the Women’s National Team. Not only did she help the team win gold at the 2008 FIBA Championships, but she also led them to victory at the 2009 World Championships in Bangkok, Thailand.

How wealthy is the athlete? How much does she make as a professional basketball player? How is the twenty-something doing for herself nowadays? According to sources, Skylar Diggins’ current net worth stands at around $400,000. Where did most of this money come from? Let’s have a look below by going over some of her career highlights.

How did Skylar Diggins Make Her Money & Wealth?

Born on August 2, 1990, in Indiana, Skylar Diggins grew up with her three younger siblings in South Bend, where she involved herself with sports at a young age. As a teen, she went to Washington High School, where she was a member of the basketball team. During her time there, she was also named to the all-state first team for three consecutive years from 2007 to 2009.

After high school, she went to Notre Dame where she continued her basketball career. By the time she was in her sophomore year, she had risen to national prominence. Incredibly talented, she had become the second women from the Notre Dame’s women team to reach the milestone of scoring over 1,000 points.

Two years later, she was drafted by the Tulsa Shock in the 2013 WNBA Draft. Over the next few years, she had several noteworthy games including those against the San Antonio Stars, Phoenix Mercury and Seattle Storm. Continuing to go above and beyond on the court, she received the WNBA Most Improved Player Award in 2014. Despite having suffered from a torn ACL injury, she later signed a multi-year extension with the team in 2016, which had been renamed as the Dallas Wings.

Though it’s not unknown how much she received from the contract extension, it’s said that she made around $60,000 a year by the mid-2010’s.

Fast forward to the 2017 season and she has returned to peak form, having played all 30+ games of the season. In fact, she was voted into the All-Star Game shortly after the team’s victory against the San Antonio Stars.

As you can probably expect from such an athlete, Diggins has signed a number of endorsement deals throughout her career. For instance, she was the first female basketball player to sign with Roc Nation Sports in 2013. Later that same year, she also signed a deal with Nike and Body armor SuperDrink. Having said all that, the amount she received from said sponsorships have not been disclosed to the public. Considering her fame and presence, however, it’s likely nothing to scoff at.

Yes, she has been married to Daniel Smith since 2016. Following their marriage, she legally changed her last name to Diggins-Smith.

Does Skylar Diggins Have Any Children?

No, Skylar Diggins does not have any children.

Did Skylar Diggins Go to College?

Yes, she did. After graduating from high school, she went to the University of Notre Dame, where she continued to make herself known as a distinguished basketball player.

Since then, she has received a degree from the Mendoza College of Business.

What is Skylar Diggins Famous For?

Skylar Diggins is best known for her WNBA career with the Dallas Wings (formerly the Tulsa Shock).

At this time, we do not have any information on Skylar Diggins’ abode, nor do we have any photos available.

What Kind of Car Does Skylar Diggins Drive?

Details on Skylar Diggins’ vehicle are not available.

How Much Money Did Skylar Diggins Make Last Year?

At this time, we do not have any information on Skylar Diggins’ annual salary.

After suffering from a torn ACL, she returned to peak form for the 2017 season. In fact, she went on to play all 34 games, with a season-high score of 30 points. For her achievements, she was voted into the All-Star Game in 2017.

What’s the basketball player up to nowadays? If you’re a fan, why not keep up with her via social media? You can find Skylar Diggins-Smith on Instagram and Twitter at @SkyDigg4. While you’re at it, don’t forget to also show your support by liking her official Facebook fan page here.