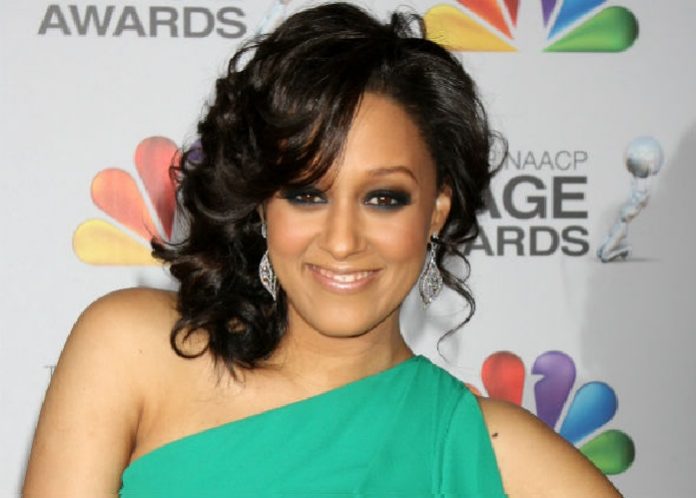 Tia Mowry is an actress, and singer, who first found fame in the long-running sitcom ‘Sister, Sister’, alongside her real-life identical twin sister Tamera. Their starring roles as long-lost sisters won them both a number of awards and opened the door for the sisters as regular faces on our screens, both on various TV shows, and in movies.

Now in 2018 Tia Mowry is still as busy as ever, as the star of her own Cooking Channel show, ‘Tia Mowry at Home’, but as well as making those mouth-watering meals, she’s still greatly in demand as an actress, and she’s also found the time to publish a number of books. But how much has Tia earned since her child acting days? And how can you tell the identical duo apart? Read on to find out.

How Did Tia Mowry make her money & wealth?

Tia Dashon Mowry was born in Gelnhausen, West Germany, on July 6th 1978, just two minutes after twin sister Tamera. Their parents were both in the army at the time, but when they were growing up, the family was stationed at Fort Worth, Texas, and it was there that they began to perform at an early age. At first, the twins would sing and dance, in beauty pageants and talent shows, but at the age of twelve, they persuaded their mom Darlene to move to California so they could try their hand at acting. Darlene agreed on the condition that the girls had one month to find their first job, and if they did she would give up her job in the military and become their manager.

At first, the twins danced in some music videos and appeared in a few TV shows, but their first big opportunity was as singers in the all-girl R&B group ‘Voices’. The only album from the group was 1992’s ‘Just The Beginning’, which featured the most successful single of the group, ‘Yeah, Yeah, Yeah!’, released the same year. ‘Yeah Yeah Yeah!’ briefly managed to get to 72 on the Billboard Hot 100 chart, but that was the high-point for the group. The album was not a success commercially either, and the following year the group went their separate ways.

Younger brother Tahj was also pursuing an acting career in California, and by the mid-1990’s he had a recurring role as Teddy on the ABC sitcom ‘Full House’. While his older sisters were visiting him on the set one day they were spotted by a producer, and that resulted in their big break, as the long-lost twin sisters on ‘Sister, Sister’.

The show premièred on April 1st, 1994, and featured identical twins who had been separated at birth and adopted by different people. Tia played Tia Landry, the mature and responsible twin who was a straight-A student, while Tamera played the role of Tamera Campbell, her more impulsive and outgoing sister. In the show, their characters were reunited in a chance encounter at the age of fourteen and afterward lived together. ABC ran Sister, Sister for two years, but after falling ratings, they finally dropped the show after two seasons. Fortunately, the newly-formed WB TV Network picked up the show and found a slot for it in their Wednesday night line-up. As the Mowry sisters got older, the show developed into a more serious version of its early self, and it ran for a further four seasons until finally ending in 1999. The show also gave both sisters the opportunity to show off their vocal talents, and as well as singing in several episodes, they also sang the theme tune for the final two seasons.

After Sister, Sister ended, both Tia and Tamera completed their education. They studied psychology at Pepperdine University, and Tia went to Italy to study humanities. They both graduated with a Bachelors degree in Psychology in 2003, but they also found time to make several appearances on other TV shows, including guest appearances alongside younger brother Tahj on ‘Full House’, Tia even played the older sister of Tahj’s character in one episode. In 2000 the twins co-starred in the fantasy-comedy film ‘Seventeen Again’, in which they were joined by Tahj, and in 2002 they appeared in the comedy, ‘The Hot Chick’ starring Rob Schneider.

In 2005 the sisters co-starred in the Disney Channel original movie ‘Twitches’. For Twitches they actually swapped roles, originally Tia was going to play Camryn, with Tamera playing Alex, but they both preferred the other role and producers agreed to swap them over, which only led to more confusion for the rest of the cast who already had trouble telling them apart. These days the sisters have developed their own personal styles and are noticeably different, but back then it was only the distinctive mole on Tamera’s left cheek that set them apart.

Twitches won seven million viewers for its début, a record for the Disney Channel at the time, and the sisters reprised their roles for the sequel, ‘Twitches Too’ in 2007. Since then the Mowry twins and their brother Tahj has often appeared in each other’s shows, and the sisters even appeared in their own reality TV show ‘Tia & Tamera’, which aired on the Style Network in 2011, featuring Tia’s preparations for the birth of her first child. The show became the most watched début in the Style Network’s history, and since 2015 Tia has become famous for her lifestyle and cookery show, ‘Tia Mowry at Home’, which features guests, including her dad on one occasion. She continues to make regular guest appearances on TV shows, most recently in ‘Nicky, Ricky, Dicky & Dawn’, and ‘Me, Myself & I’ in 2017.

In 2015 Tia and Tamera co-authored a book for children, ‘Twintuition: Double Vision’, which featured a tale of psychic twins. The book was well-received by critics and it’s middle-grade audience, and the Twintuition series of books now totals four, with the conclusion to the series, ‘Twintuition: Double Dare’ released in May 2018. Tia also published a book about pregnancy, ‘Oh Baby: Pregnancy Tales and Advice from One Hot Mama to Another’ in 2013, and a book about nutrition and healthy eating, ‘Whole New You: How Real Food Transforms Your Life’, in 2017.

In 2000, Tia began dating actor Cory Hardrict, and they married in 2006. In 2005 they worked together on the movie ‘Hollywood Horror’, and they had their first child, son Cree, in 2011. In November 2017 Tia announced she was pregnant again, and the couple had a daughter, who they haven’t released the name of yet, on May 5th, 2018.

Where does Tia Mowry Live?

Tia and Cory live in Los Angeles, and although not too much is known about Tia’s home, other than her kitchen which is all too familiar to fans of ‘Tia Mowry at Home’, she has shared some details about another one of her interests. Tia has been a vegan for several years, and in order to provide those organic vegetables for her healthy lifestyle, she has created her own organic garden in her backyard. In order to promote the vegan lifestyle, Tia even once posed for a magazine cover in an outfit made entirely from vegetables.

Tia and Tamera won many award nominations for their starring roles in ‘Sister, Sister’. They shared the Nickelodeon Kids’ Choice Award for Favorite Television Actress for three consecutive years, from 1995 to 1997, and they won the Nickelodeon Hall of Fame Award in 1998. In 1999 they shared the NAACP Image Award for Outstanding Actress in a Comedy Series, and they won it again the following year. In 2012 the twins were nominated for five awards for the Reality TV show ‘Tia & Tamera’.

Tia is involved with the Entertainment Basketball League Celebrity Team. She is currently the head coach of the Atlanta team, which includes husband Cory, as well as Pooch Hall, her former co-star from the show ‘Game’. Tia and Tamera also run their own production company, ‘Twilight Productions’, and Tia is actively involved in supporting PETA, particularly in the promotion of veganism. You can keep up to date with Tia’s latest activities on Instagram, where she has five million followers, or Twitter, where she posts regularly about her life and latest projects to two million fans.