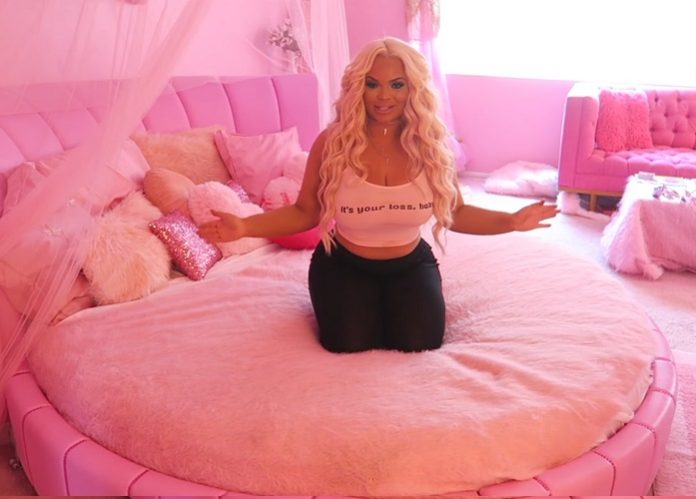 Trisha Paytas is an internet celebrity, singer, songwriter, and author who first became famous through her Youtube channel ‘blndsundoll4mj’, which she began uploading videos on in 2006. Unlike many other members of the original Youtube community, Trisha has adapted her content to keep up with Youtube’s incredible growth over the last decade, and she’s managed to consistently grow her fan base year after year.

Trisha Paytas has become an iconic symbol of Youtube, and many people believe she’s the undisputed queen of the platform, and her no-holds-barred honesty and outgoing personality have gotten her numerous appearances on mainstream TV, and even appearances in music videos with some of the biggest artists in the music industry. But how much has Trisha Paytas earned from her internet fame? Read on to find out.

How Did Trisha Paytas make her money & wealth?

Trisha Paytas was born in Riverside, California on May 8th, 1988. When she was three her parents divorced, and she moved to Illinois with her mother Lenna, while her father stayed in California. The break up of her family affected Trisha deeply, and her childhood was made even more miserable, by bullying that she suffered at school because of what she saw as her ‘awkward proportions’ and overall body type. Trisha didn’t get along well with her mother, and at the age of 15, she returned to California to live with her father.

Trisha’s life didn’t improve after her move to California. She attended public school, where she encountered more bullying, and after a custody battle between her parents, she moved back to Illinois with her mother. At the age of 18, after she graduated from high school, she returned to California to live with her father, and she began to pursue an acting career. At first, Trisha worked as a lingerie model, and then as a stripper to support herself, but then she landed an acting role on The Greg Behrendt Show and appeared in every episode of the first season, but unfortunately the show wasn’t commissioned for a second.

Trisha appeared on ‘Who Wants to Be a Superhero?’, as Ms. Limelight, for four episodes in 2007, and that year she also opened the blndsundoll4mj Youtube channel, originally intended as a fan channel for director Quentin Tarantino, who Trisha idolized. Trisha uploaded some Tarantino-related videos, but soon she began to upload a far wider variety of content, including beauty tips, comedy, fashion, and relationship advice. Trisha also uploaded videos where she would, by her own admission, troll the Youtube community, by doing or saying provocative things to gain views, with videos such as ‘Do Dogs Even Have Brains?’.

It’s the variety of Trisha Paytas’ content that really stands out amongst the Youtube community. She has continued with occasional trolling videos, but she also lip-synced to vocals in the early days, before she began writing, producing and performing her own original songs. Along the way, she covered sex, beauty, love, and her own insecurities, with remarkable honesty. Trisha’s videos have been described by some as overly-candid, but her willingness to share the abandonment issues that stemmed from her difficult childhood to her feelings about her own body image has won her many fans, and a great deal of respect too.

Trisha Paytas has made several videos about body positivity, and her struggle to maintain a positive self-image. Although Trisha has never been without admirers, both male and female, who rightly consider her to be a beautiful woman, her disarming honesty in dealing with the roller-coaster of emotions she experiences is compelling to watch. Trisha’s love affair with food is a constant theme of her work, she is credited with being one of the first to feature ‘Mukbang’ videos on Youtube, where she eats and talks at the same time. But Trisha is equally well-known for the videos where she has breakdowns on the kitchen floor and lets the tears flow as she talks about a variety of emotional topics.

Trisha’s online popularity has also led to a number of TV appearances, she’s appeared on ‘The Price is Right’, ‘the Ellen DeGeneres Show’ and ‘Jane By Design’. She also played a fictionalized version of Jessica Simpson in the music video for Eminem’s ‘We Made You’ in 2009, as well as making an appearance in Amy Winehouse’s ‘Tears Dry on Their Own’ in 2010. Her own musical talents are frequently featured on her Youtube channels, and since 2015 she has released seven albums and performed in over 20 music videos featuring songs from those albums on Youtube. In 2017, Trisha appeared on the British version of the reality TV show ‘Celebrity Big Brother’, which she left voluntarily after 11 days in the house.

Now in 2018, Trisha’s main Youtube channel has over four million subscribers who have viewed her videos over 1.3 billion times. In 2014 she opened a second channel, which has already gained 1.1 million subscribers and in excess of 200 million views, and it’s from Youtube that she has earned the majority of her wealth. Trisha has also proved that she is far from the ditzy blonde that she portrays in her Youtube videos. In 2013 she published her first book, ‘The History of My Insanity’, and since then she has published a further five. In her most recent book, ‘How to Get Internet Famous’, published in 2015, she shares some of the secrets of her success for others who wish to succeed on Youtube.

Despite her insecurities, and her wild image, Trisha’s personal life has until very recently, been fairly settled. For some time she has been in a steady relationship with fellow Youtuber Jason Nash, but on June 21st, 2018 their relationship appeared to be in trouble, as Trisha uploaded a video entitled ‘We broke up because I’m too fat’, where she explains that Jason had made an offhand comment she took offence with. Jason has made a response video since that explains how much he loves Trisha, and he’s also apologized to her, but there’s an element of drama to the whole thing. The pair is due to go on a string of live tour appearances later this year, but perhaps the split is really final, as Trisha has told fans that ticket holders will receive a refund.

Trisha Paytas uploads videos several times a week on both her channels. Her original channel gets around 900,000 views per day, while her second channel gets another 200,000. In total that translates to around $2,000 per day in earnings from Youtube, or around $700,000 per year. In addition, Trisha also has a Patreon account, where she provides exclusive content for an adult audience. On Patreon she has almost 3,000 patrons, which by a conservative estimate should bring in at least $20,000 a month, or another $240,000 per year. Considering Trisha’s various other income streams, namely, merchandising promotions, book sales, endorsements, appearance fees and the sales of her perfume ‘Trisha’, that she released in 2014, her annual income is estimated to be at least $1.5 million, and possibly as high as $2 million per year.

Where does Trisha Paytas Live?

In 2016 Trisha Paytas bought a home in the Hollywood Hills with a stunning view of downtown Los Angeles. The home cost $2 million and features a garden terrace, four bedrooms, and three bathrooms, a games room, a swimming pool and leafy surroundings. Trisha is also obsessed with the color pink, and although she appears to have resisted that enough to leave at least some non-pink surfaces in her home, her car is another matter entirely.

What car does Trisha Paytas drive?

Trisha’s beloved run-around is a distinctive, or I should say blindingly bright, Mercedes G-Wagon, that sports a stunning neon pink paint-job with black trim. The vehicle, which sells for around $180,000 as standard, is perfect for the Hollywood Hills around Trisha’s home, and can manage 0-60 in 3.9 seconds. It has a top speed of 168 mph, and in 2014 she made her version of the high-end vehicle unique with Swarovski crystals in the headrests, customized floor mats, and even more crystals embedded in the steering wheel. I probably don’t need to mention that the color scheme inside is a sea of pink.

Trisha has over 1.8 million followers on Instagram, and another 550,000 on Facebook. On Twitter, where she describes herself as ‘A mix between Woody Allen and Your Local Hooker’, she has 493,000 followers, and unlike other big Youtube stars, Trisha is someone who frequently replies to comments on Youtube and her other social media accounts. She maintains the domain name Trishyland.com, which links to her adult-only Patreon account, and she collaborates with numerous other big Youtubers, including Shane Dawson, Gigi Gorgeous and several members of the ‘Vlog Squad’, including David Dobrik and Liza Koshy.