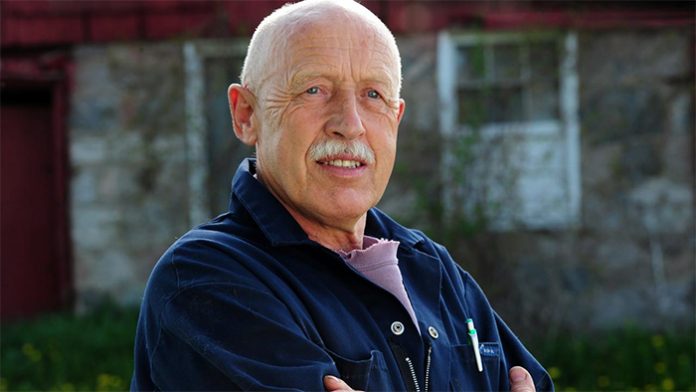 A veterinarian, Dr. Pol rose to fame in the popular reality show Incredible Dr. Pol. Premiered in 2011, the show—which centers around his veterinary practice in Harbor Beach, Michigan, has set many viewership records over the past several years. As of 2018, there have been thirteen seasons, the latest of which is still ongoing.

Since his rise to fame, he has also been featured in other programs such as Jinek, and Home & Family. At one point, he even had a second reality show called Calling Dr Pol, which ran from 2015 to 2016.

How much is he paid for his appearances on the Nat Geo Wild series? How lucrative is his veterinary business? Is he involved with any other projects? How wealthy is the animal doctor? According to various sites, Dr. Pol’s current net worth sits at around $1 million. Where did the majority of this sum come from? Let’s have a look below.

How did Dr. Pol Make His Money & Wealth?

Born on September 4, 1942, in the Netherlands, Dr. Pol was raised on a family farm in the province of Drenthe. Sometime after completing high school, he went to Utrecht University, where he studied veterinary medicine. After graduating with his DVM degree, he and his wife moved to Harbor Beach, Michigan, where he worked as a veterinarian for many years. Ultimately, it wasn’t until 1981 that the pair started their own clinic called, Pol Veterinary Services.

In 2011, it was announced that he would be starring in his own reality show, The Incredible Dr. Pol, which aired on Nat Geo Wild. The show centers around the veterinarian, as well as his family and employees—including two other animal doctors, Dr. Thomas and Dr. Grettenberger who both work in his rural clinic, Pol Veterinary Services.

Popular among viewers, the series has since continued for seven years and counting. Still on the air as we speak, it is currently on season thirteen as of July 2018. The main star of the show, it’s said that Dr. Pol receives $30,000 per episode. Considering how long it’s been airing on television, it’s likely that he’s earned a considerable sum from the Nat Geo Wild title over the years.

Aside from The Incredible Dr. Pol, the veterinarian also starred in Calling Dr. Pol, another reality series that ran from 2015 to 2016. Similar to the former, it followed the life of the country vet, as he treated a number of family pets and farm animals. Unfortunately, it’s not known how much he earned from the show.

In terms of other television appearances, he has also been featured in the programs Jinek, and Home & Family. Earlier this year, he even appeared on the WGN Morning News.

As far as other projects go, he also runs his own podcast called The Incredible Dr Polcast. Hosted by him and his son Charles, the pair takes emails, phone calls, and social media questions from pet owners around the world. For those who are interested in tuning in, it is available both from his official website and on iTunes

Yes, he has been married to his wife Diane, a former school teacher for over five decades. Allegedly, the two had met while he was a foreign exchange student in Michigan in 1961.

Does Dr. Pol Have Any Children?

Yes, they have two adopted children, a daughter named Kathy and a son named Charles.

Did Dr. Pol Go to College?

Yes, he received his DVM degree from Utrecht University in the Netherlands.

Dr. Pol is best known as the main star of the reality show The Incredible Dr Pol, which first aired on Nat Geo Wild in 2011. As of 2018, it has continued for thirteen seasons.

Dr. Pol lives in rural Weidman, Michigan, where he continues to practice veterinary medicine, with his team of staff. We do not have any pictures of his house at this time.

What Kind of Car Does Dr. Pol  Drive?

How Much Money Did Dr. Pol Make Last Year?

Unfortunately, we do not have any information on Dr. Pol’s 2017 salary at this time.

As of July 2018, The Incredible Dr. Pol is currently still ongoing. For those who are interested, you can watch the show on Nat Geo Wild on Thursdays at 9 EP.

Interested in following the country vet on social media? You can find him on Instagram at @Thedrpol or on Twitter at @Drpol. On Facebook, you can also show your support by liking his official fan page, which you can visit here.