Top 10 Most Expensive Bottles of Wine in the World 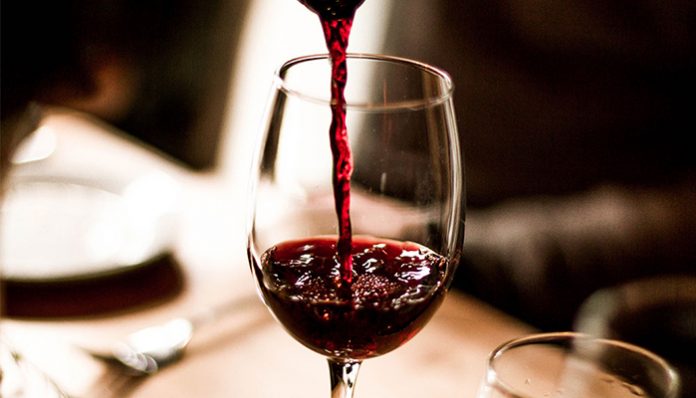 One of the greatest ways to unwind after a long day is a glass of wine. A delicious pleasure, it allows us to decompress with just a few sips—in fact, it has been shown to relieve stress when consumed in moderation.

Given the history of wine—which dates back between 8000 BC and 4100 BC, it’s not surprising to know that there are thousands of varieties in the world. From red to white wine, and everything in between, new medleys are constantly being developed. In terms of taste, one of the most influential factors, as you probably already know, is the grape variety that goes into its making. Some of the most popular ones include Chardonnay, Cabernet Sauvignon, Merlot, and Sauvignon Blanc, to name a few.

If you’ve ever walked into a liquor store, you probably know that wines can vary greatly—that is, in terms of price. While many can be bought for under $15, others can easily set you back thousands of dollars. In fact, it’s no secret that some exotic wines can cost as much as a car!

What makes them so special? Curious to know what some of the most expensive wines are? Below, we’ll be taking a look at ten of the world’s most expensive varieties. 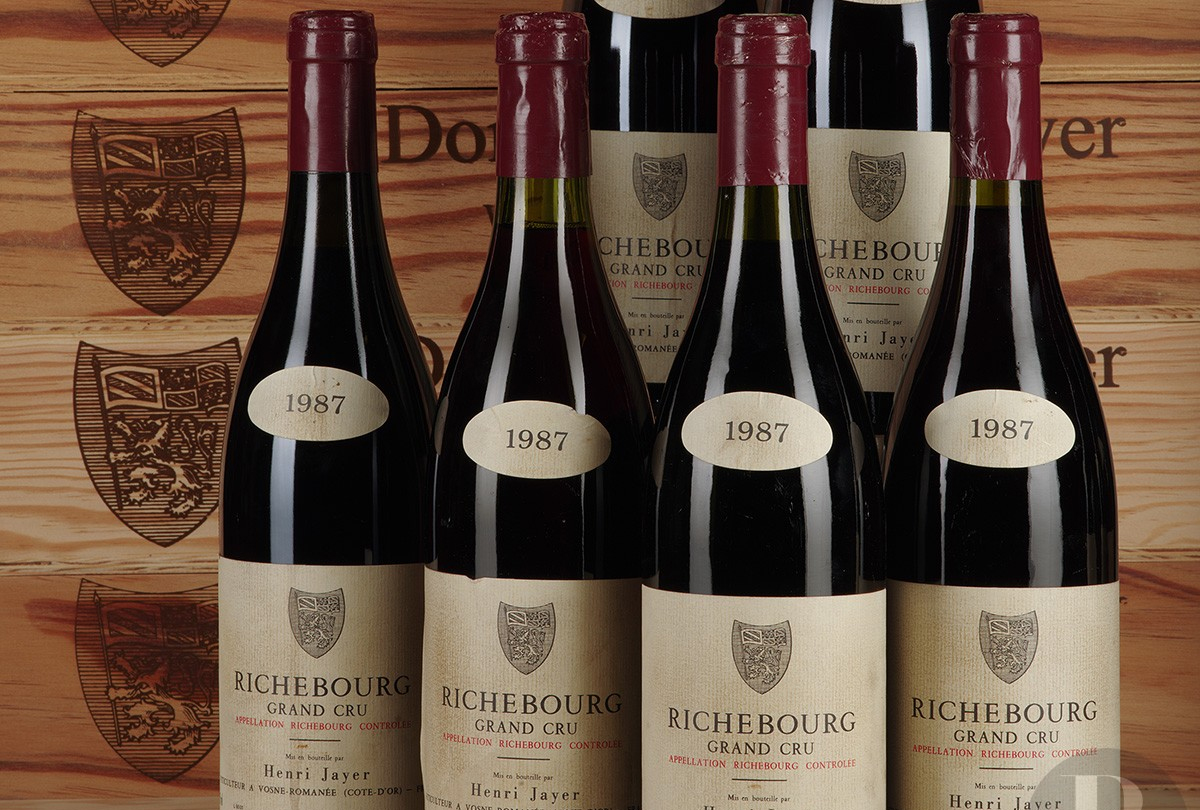 Made from one of France’s most legendary grapes—ones that are grown at high altitude, the 1987 Richebourg is known for its rich, velvety finish. A deep, dark ruby color, it often resembles a mix of ripe strawberries, cherries, and roses to the nose. Powerful with intense, deep dilators, it is often lauded for its perfect balance.

While this wine can sometimes be found for a few thousand dollars, it can go as high as $16,000 a bottle on some occasions, according to Decanter.com. Unfortunately, this means that it’ll be hard for most of us to get a taste of this elixir. 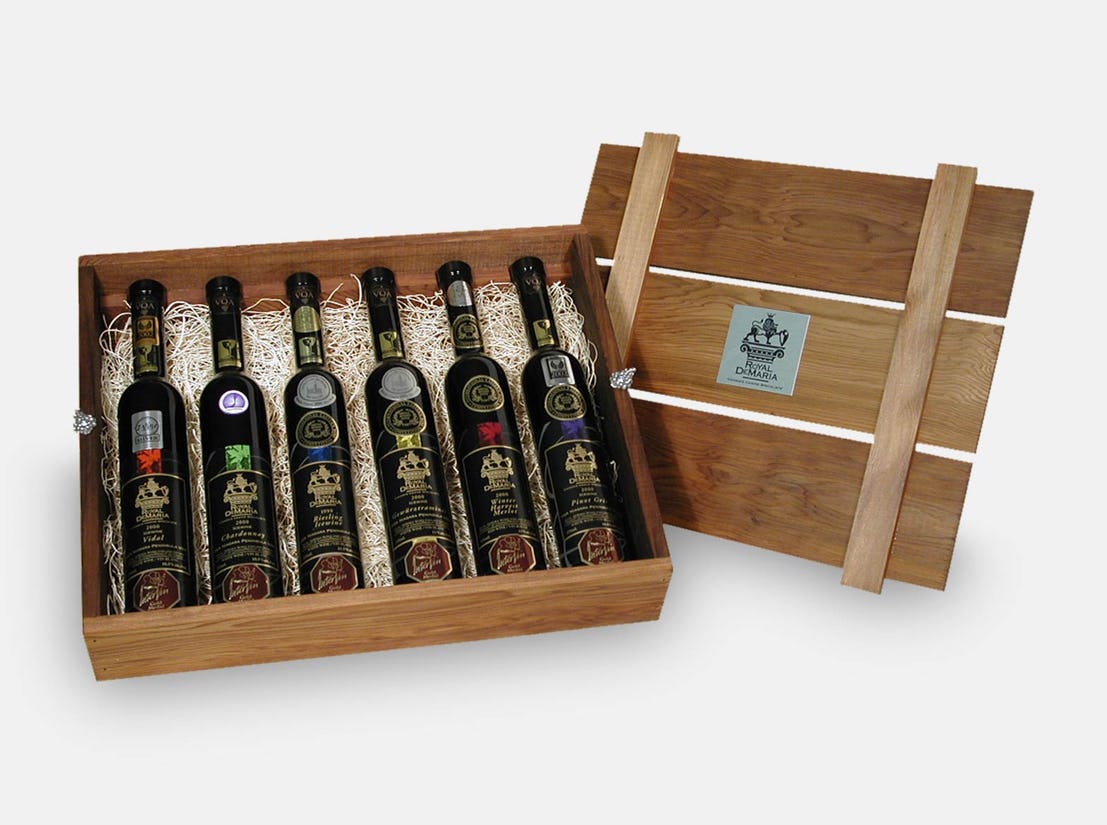 The first Chardonnay icewine made by Royal DeMaria, it is made from grapes that are frozen on the vine, prior to fermentation. Due to its intensive production, the wine bears a great price tag. A pale yellow color, the company describes it as having “a light nose of honeyed oak.”

Part of the Billy Byers series, only 60 bottles of this particular wine was ever made. In 2002, one of these bottles were given to Her Majesty Queen Elizabeth during her Jubilee Visit to Canada. Four years later, another was sold to a Saudi price for an alleged $30,000—a staggering price, seeing as how typical icewines sell for $25 to $150 each! 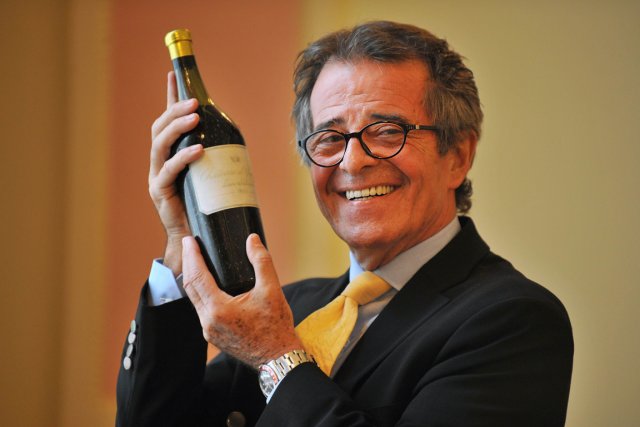 One of the most supreme vintages ever produced, the 1811 Chateau d’Yquem is noted for its high levels of residual sugar, which are combined with the grapes’ natural acidity. Due to the latter, which serve as preservative agents, it can age for indefinite periods if stored properly.

In 2011, a bottle of this rare vintage was sold to wine connoisseur Christian Vanneque for $117,000. Allegedly, the business owner had purchased the rare bottle for his establishment, where it is to go on display. With that, it set a new Guinness World Record for being the most expensive bottle of white wine ever sold. 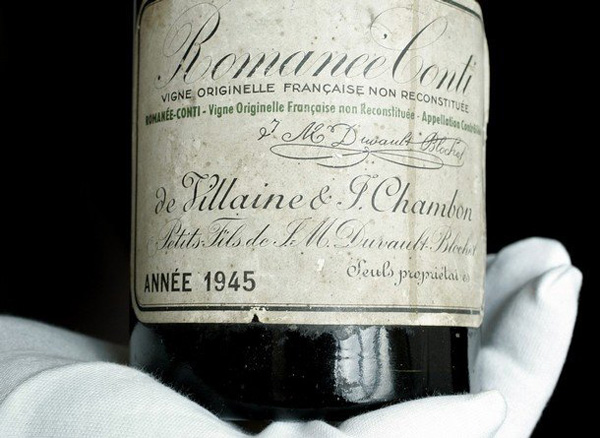 Produced amidst World War II, the 1945 Romanee Conti was created just prior to an outbreak of phylloxera, a pest that is capable of destroying an entire vineyard. By 1949, the entire Romanee-Conti vineyard had to be pulled-up in its entirety—it wasn’t until 1952 that they returned with their next vintage.

The final harvest from the pre-phylloxera vines, only 600 bottles were ever made. A coveted rarity, it is known for its distinctive flavour—which many attribute to the hot, dry summer of that year. In the past, a private wine collector paid $123,900 for a bottle of the red wine. 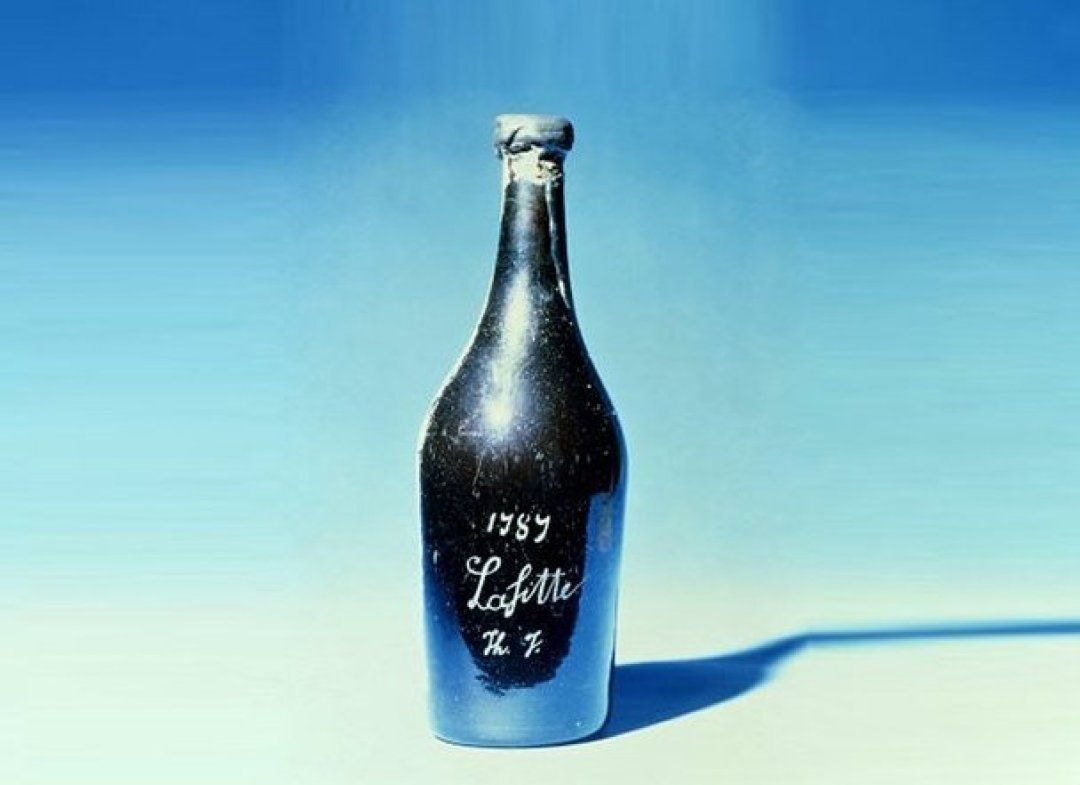 The 1787 Chateau Lafitte was originally bought by Thomas Jefferson in France—in fact, he had etched his initials on the label. Nearly two centuries later in 1985, this bottle was sold to a wine collector for $156,000 in London. Unfortunately, due to its age, it could only be put on display, as even the finest of wines turn to vinegar over hundreds of year.

According to some, this bottle of wine is said to have originated from late President Thomas’s cellar. With that said, its authenticity has been the subject of speculation for many years. 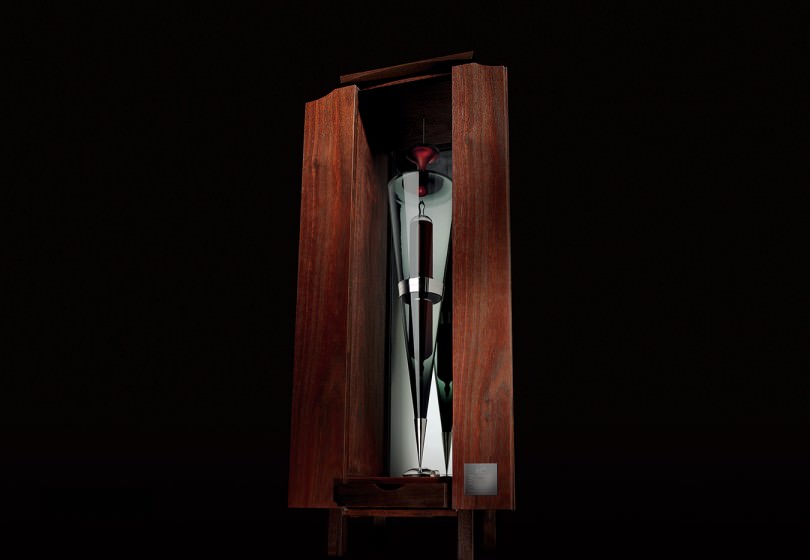 A compelling work of art, this wine is unique in that it is inside a limited edition glass ampoule. A collaboration with four of South Australia’s finest craftsmen, only twelve of these handmade vessels were made in 2012. Of course, each ampoule from this distinctive project is also accompanied by a Certificate of Ownership and Authenticity.

Inside the glass, is the 2004 Kalimna Black 42 Cabernet Sauvignon—a rare wine created from some of the best, hand-picked grapes from the Cabernet Sauvignon vineyards. One of the first ampoules from this premium collection was bought by a Hong Kong restauranteur, who later encased it in a bullet-proof glass case for display in his Chinese restaurant. 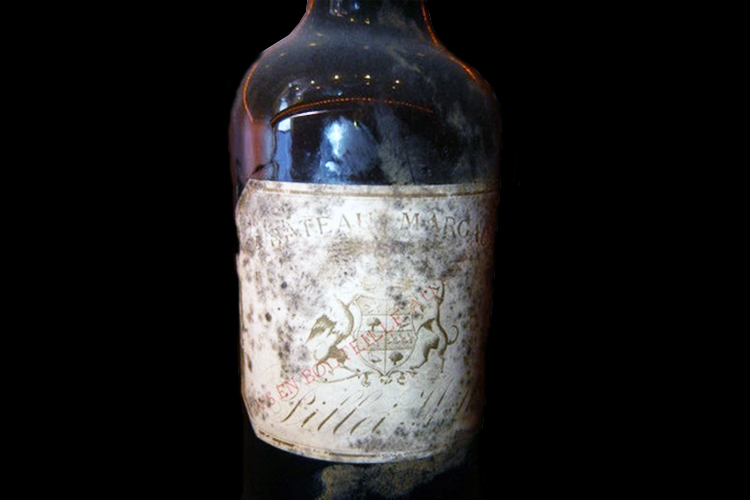 Another vintage from Thomas Jefferson’s collection, the 1787 Chateau Margaux was discovered with his initials in his Parisian cellar wall in 1985. Not long afterward, it was sold to a wine merchant named William Solokin for $225,000.

In 1989, Sokolin brought the bottle of wine to a Four Seasons restaurant, where he began to show it around. Unfortunately, towards the end of the evening, a waiter bumped into his table, which caused the vintage to fall to the ground. While the wine was no more, he had fortunately inspired it for $225,000, which he later received from his insurance company. 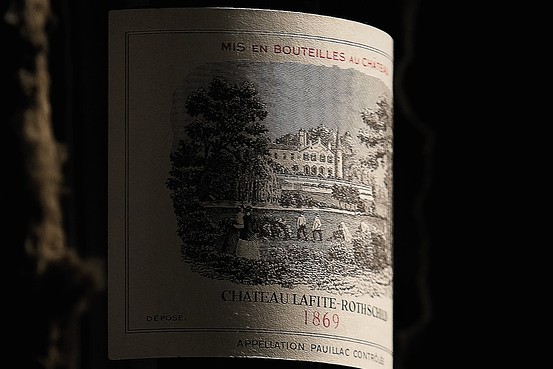 In 2010, a bottle of Lafitte 1869 sold for a record-breaking $232,692 at Sotheby’s wine auctions in Hong Kong—despite the fact that it was originally estimated to reach just $8,000. Interestingly, the Lafitte has often been considered a luxury gift item in Asia.

A rare pre-phylloxera vintage, the vintage wine is often described as having “very good tasting notes.” As far as we can tell, it is the only bottle of 1869 Lafitte to have ever been sold. 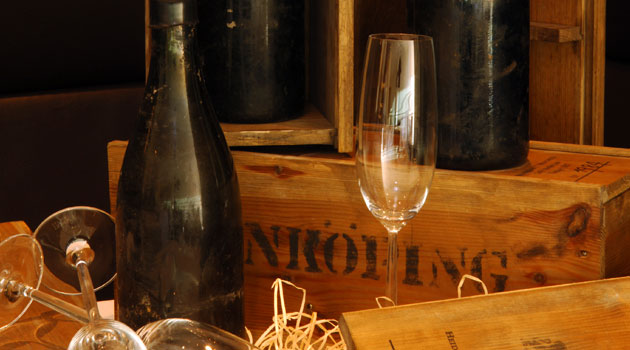 In 1916, a shipment of this wine was being sent to the Russian Imperial family, when it got lost at sea. In the end, it wasn’t until 80 years later, that it was discovered—still in the waters, by a ship driver. Allegedly, the bottle of wine had laid at the bottom of the sea with the ship, which rested 63 meters below the surface. Interestingly enough, it had been “stored” in ideal conditions as it was both shielded from light and in constant cold temperatures.

As far as taste goes, it was described as having “massive flavors of burnt citrus and caramelized bananas” by a gentleman named Chris Hoel, who tried it at a private wine-tasting event. 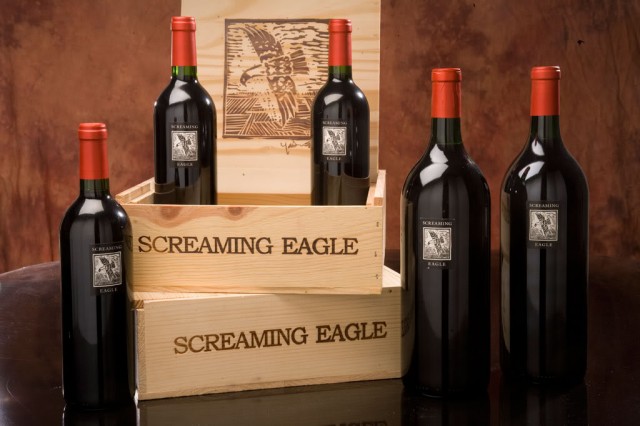 In 2000, six liters of this vintage wine was sold for an astounding $500,000 at the Napa Valley Wine Auction. The most expensive wine ever to have been produced by Napa Valley, the proceeds ultimately went to charity.

Due to the fact that it was produced in particularly low volumes, the 1992 Screaming Eagle Cabernet Sauvignon has become highly sought after by wine collectors. Coupled with the fact that it has received nothing but outstanding reviews from journalists, it’s not surprising to know that it is one of the most celebrated wines in the world.