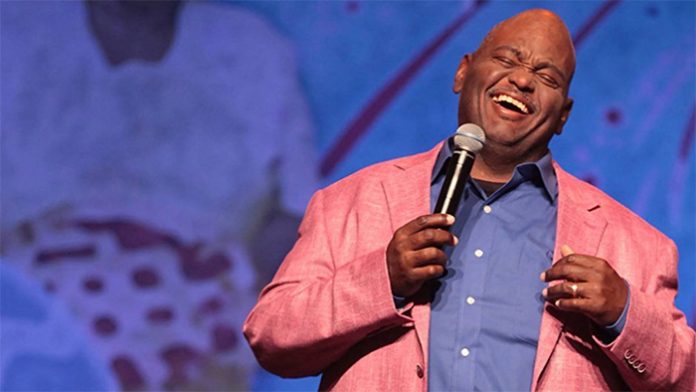 An American actor, Lavell Crawford is perhaps best known for playing Huell Babineaux in the crime drama, Breaking Bad. Some of his other television credits include My Parents, My Sister & Me, Aqua Teen Hunger Force, Better Call Saul and Legends of Chamberlain.

In addition to his TV work, he has also acted in several films over the years such as Mike and Dave Need Wedding Dates, Boo! A Madea Halloween, The Ridiculous 6, and American Ultra. Later this year, he will be co-starring in the comedy, Love Is Not Enough alongside Kim Coles and Claudia Jordan.

How wealthy is the entertainer? How much does he earn from his acting gigs? According to various sources, Lavell Crawford has amassed a net worth of $500,000 as of 2018. Did the majority of this come from his television/film career? What other projects, if any, is he involved with? Let’s have a closer look below.

How did Lavell Crawford Make His Money & Wealth?

Born on November 11, 1968, in St. Louis, Missouri, Lavell Crawford suffered a number of hardships during his early life including a struggle with weight gain and abandonment by his father. Sometime after graduating high school, he got into stand-up comedy; by the early 90’s he had started to make regular appearances on BET’s ComicView.

As one thing led to another, he started to act in various films and television series in the early 2000’s. Some of his early credits include Beverly Hood, Baby’s Momma Drama, and The Jamie Foxx Show.

In the end, however, it wasn’t until the early 2010’s—after he was cast as a supporting character in Breaking Bad that he started to gain more fame as an actor. An incredibly successful drama, the series had won numerous awards during its run including 16 Primetime Emmy Awards and two Golden Globe Awards, among many others.

Appearing alongside Bryan Cranston, Aaron Paul, and many others, Crawford played the role of Huell Babineaux—Saul Goodman’s assistant and bodyguard. Introduced in the fourth season, he ultimately went on to make several appearances in the fifth season as well, which aired in 2012. To this day, it remains to be one of his best-remembered portrayals on television. Unfortunately, however, it’s not known how much he was paid for the role.

Since then, the actor has appeared in many other TV titles including Squidbillies, The Crazy Ones, Super Fun Night, and Your Pretty Face Is Going to Hell—however, none would rival the success of Breaking Bad. At one point, he even lent his voice to a couple of characters in the animated series, Aqua Teen Hunger Force.

Outside of television, he has worked on a number of films over the past few years such as Meet the Blacks, The Ridiculous 6, Boo! A Madea Halloween, and American Ultra. According to IMDb, he will be co-starring in an upcoming comedy titled Love Is Not Enough.

In terms of other projects, he has also continued to perform comedy on the side. In fact, he had just recently hosted his own TV special called Lavell Crawford: Home for the Holidays in 2017.

Yes, he has been married to his wife DeShawn Crawford for numerous years.

Does Lavell Crawford Have Any Children?

A father of one, he and his wife have a child named LJ Crawford.

Did Lavell Crawford Go to College?

No, as far as we know, Lavell Crawford did not go to college. Instead, he opted to pursue comedy and acting after high school.

What is Lavell Crawford Famous For?

Lavell Crawford is perhaps best known for his portrayal of Huell Babineaux—Saul Goodman’s bodyguard and assistant in the award-winning crime drama, Breaking Bad.

According to his official Twitter bio, Lavell Crawford currently spends his time in Texas. We do not have any additional details at this time.

What Kind of Car Does Lavell Crawford Drive?

Unfortunately, details on Lavell Crawford’s vehicle are unavailable at this time.

How Much Money Did Lavell Crawford Make Last Year?

Information on Lavell Crawford’s 2017 earnings is not available.

According to IMDb, he will be appearing in two upcoming films later this year—Compton’s Finest and Love Is Not Enough, the latter of which will see him as one of the main leads. As far as television roles go, he last appeared in the animated series Legends of Chamberlain Heights, where he voiced the character of LeDante.

Want to know what he’s up to? Find out by following Lavell Crawford on social media! He can be found on Twitter and Instagram at @Lavellthacomic.