What Happened to Jeff in 13 Reasons Why?

This article contains spoilers to the popular, but controversial Netflix original series 13 Reasons Why. It is an entertaining and also informative series that takes a deep dive into heavy issues such as mental illness, bullying, sexual assault, and even suicide. Even though Jeff in 13 Reasons Why was killed in a car crash prior to the events in the show, he is still shown in flashbacks. He is not part of the main cast but is a series regular throughout season one and some of the newly released second season.

About Jeff in 13 Reasons Why

Jeff Atkins was in the book version of 13 Reasons Why as an unnamed character, but the TV version gives the part a name and more of a personality than just “the boy who died in a car accident” by actor Brandon Larracuente. He has greenish blue eyes and medium brown hair. Both of his ears are pierced with diamond (or at least diamond-colored) studs. He has an unlikely friendship with the main character, Clay Jensen despite being a jock. He is a student-athlete and a member of the baseball team. 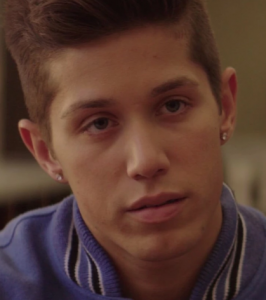 The first scene Jeff appears in 13 Reasons Why is Tape 2, Side A which is, of course, a flashback. He is sitting at a table in the library with Clay, who is tutoring him so that Jeff can maintain his grades to stay on the baseball team. The conversation turns to women, and Jeff willing offers his advice to Clay, who is less socially skilled. It is this first scene that lets you know that Jeff is more accepting and less outright mean than his fellow athletes.

We see Jeff again in a dream sequence experienced by Clay wherein they attend the Winter Ball. As the two of them sit on the bleachers, Dream Jeff inspires Clay to ask Hannah Baker to dance since she’s sitting by herself at the other side of the gym. The dream turns nightmarish – Jeff turns nasty and mocking as he bleeds from his forehead. Foreshadowing, perhaps? Later we see how the dance actually goes. Clay wasn’t going to attend at all, but he made a bargain with Jeff that he would if Jeff was able to get a C grade on his paper for history class. Clearly, the unlikely pair had some kind of bond, and Jeff has decided to take on the role of a matchmaker for Clay.

Later, at Jessica Davis’ party, Jeff gets Clay to approach and speak with Hannah, telling Clay that the only reason Hannah came to the party at all was to speak to him. He even ran interference when a rival suitor attempted to approach the pair. When Clay went to leave the party, he refused to get in the car with Jeff, saying that even the two beers Jeff had consumed were too many. Clay walks home, and this is, unfortunately, the last time he sees his unlikely friend alive.

How did Jeff in 13 Reasons Why Die?

When Clay refused to drive with him, Jeff decided to drive by himself to go get more beer for the party. Hannah left the party around the same time with her cheerleader friend Sheri Holland. Sheri drove, despite Hannah’s reservations about her doing so as she’d been drinking. Hannah hesitance was proven right. Sheri ended up hitting a stop sign full force, knocking it over. Both girls exited the car to inspect the damage. Sheri was concerned about the consequences, and fled the scene, leaving Hannah behind to walk home. Sometime after that, Jeff ran the intersection, unaware he was supposed to stop. His car was T-boned, and he died on impact.

Clearly, Jeff’s death has a big impact on the remaining characters. Hannah lists his death as the tenth reason why she decides to end her life. Clay is also distraught. He happens upon the accident on his walk home from the party, and he calls the police to report it after finding him unconscious. He is in Hannah’s tapes, mostly in a positive light. Jeff is also featured in Clay’s memories and nightmares fairly prominently.

Brandon, the actor who plays Jeff in 13 Reasons Why told Buzzfeed that he gets many letters from fans that say he made a positive influence in their lives. They like how he took Clay – a student who was often bullied and pushed around by the popular kids- under his wing despite having a higher social status as an athlete. He addresses the criticism that the show receives about its sensitive topics, and says that he appreciates it’s writers and producers for not sugarcoating “strong and sensitive” topics. Brandon appreciates that his character’s fans think he deserved better, but also states that he believed that his death served as an important and strong message about drunk driving.

Jeff is not in the second season of 13 Reasons Why very much. They showed how he die mid-way through the first season, and he was only in one other Season One episode after that. The much-loved character is only shown once in Season Two, but it is an important scene. It shows that Jeff supports Clay by having him and Hannah at his house, and then leaving them alone to get to know each other.