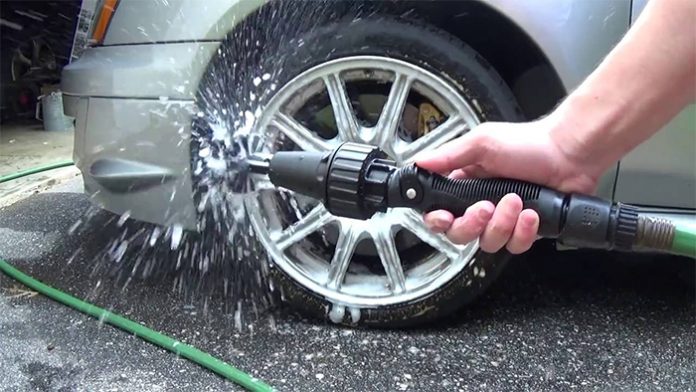 A water-powered cleaning tool, the Brush Hero can be used to tackle a variety of jobs—whether you’re trying to clean your car or garden patio. Unlike many of its competitors, it does not require the use of electricity. Instead, it uses the power of water. Convenient and easy to use, simply connect it to any standard hose and you’re ready to go. Designed to be efficient, it uses the same amount of water as a bucket and rag car wash, according to its website. For those who’d like more control, you can even switch between two different brush attachments—soft or tiff.

The brainchild of Glenn Archer and Kevin William, the company was launched in 2015. Ultimately, the pair—both of whom are car geeks and cyclists, had come up with the idea after noticing that there was no easy way to clean their cars and bikes without “scraping up your knuckles.” Realizing that there was no wheel brush on the market that could clean without displacing the grease, they eventually took it upon themselves to create such a product.

Many hours of hard work later, they successfully came up with a functional prototype. Naming it the Brush Hero, they did more fine-tuning before releasing it to the market in 2015. To their surprise, their creation quickly gained traction among car enthusiasts. Ultimately, it wasn’t long before people started to rave about the product on the net. With the influx of positive reviews, their popularity quickly exploded. By 2017, countless units had been sold across the country.

As they continued to grow the company, a big opportunity soon came knocking. With a little bit of luck, the inventors eventually landed themselves an opportunity to pitch the product on ABC’s Shark Tank. Featured in season nine, the episode later aired on January 21, 2018. 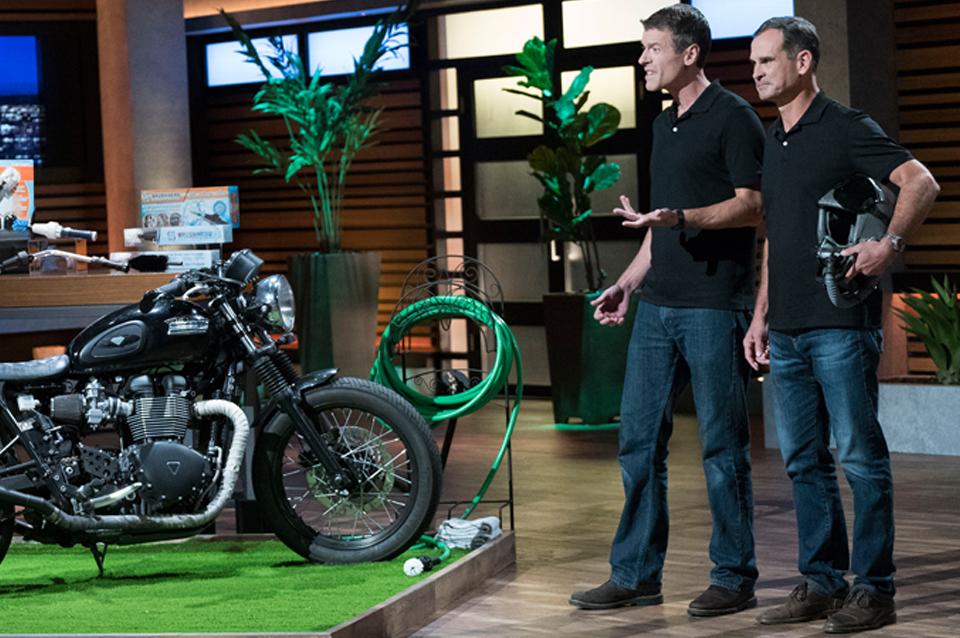 Entering the set, Glenn and Kevin let the sharks know that they are both from Alexandria, Virginia. Cutting to the chase, they tell them that they are looking for a $500,000 investment in exchange for 10% of their company, Brush Hero.

Launching into their pitch, the pair exclaims that they are both car geeks. Continuing, they admit that they’ve always found it challenging to keep their machines keep. Making a point, they go on to highlight some of the challenges of using sponges, brushes and chemicals. Letting them know that they have a solution, the duo eventually introduces the panel to their product, the Brush Hero.

Elaborating as the camera pans towards their setup, the inventors explain that it is an innovative, water-powered brush that is capable of cleaning with amazing force. Powered by water pressure along, Kevin explains, it does not require the use of any electricity or batteries. Going over how to use it, Glenn states that it simply needs to be connected to a lower pressure water source, such as a garden hose. At the same time, Kevin demonstrates the product by plugging it into a readied hose.

Showing the sharks how it works, he uses the brush to clean the wheel of a bike on the set. Elaborating on its features, he subsequently goes over several ways that the product can be used for cleaning. Putting the item down, Kevin states that they had come up with the Brush Hero with car and bike detailing in mind. Continuing, however, he reveals that they soon found out that it can be used for “virtually anything.” Giving a few examples, he says that it can easily be used to clean things such as rain gutters, patio furniture, and barbecues. 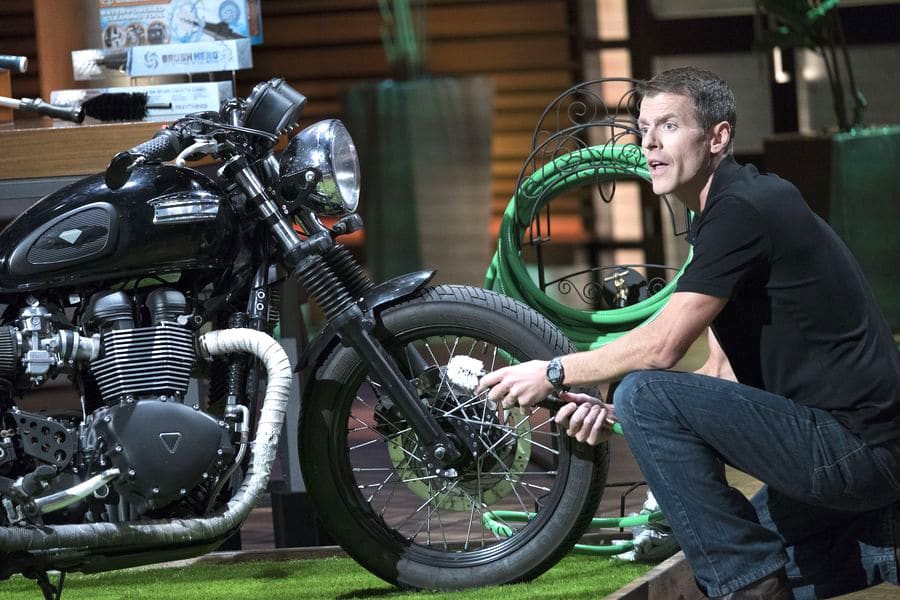 Noting that the best way to understand it is to “Brush Hero something”, the pair invites the sharks to the front to try it out. Almost immediately, Daymond and Lori head towards the bike. After being told how to use it, the sharks take turns to gives it a go on the bike wheel. Noticing the brush’s declining speed, Robert asks why it’s slowing down. Addressing the question, Glenn states that the product relies on torque and not force.

Seconds later, Robert asks half-jokingly whether or not he is always cleaning his F16. While he states that he no longer flies, he makes a point by saying that people do use it to clean airplanes, as they are only compatible with low-pressure water systems. From there, the shark inquires about its price, to which he’s told that the basic configuration retails for $34.99. Just as Robert gestures towards the product, Lori asks whether or not they can see the packaging. At the same time, Glenn also states that it costs $6.50 to make, which seems to impress the sharks.

As Kevin hands out the samples, Glenn continues by saying that they can bring the cost lower with their help, which garners a reaction from Robert. Asked how much they will be selling this year, the creator states that they will be doing $3 million, $300,000 to $400,000 of which will be profits. Asked where they’re selling the product, they tell them that most of their sales are online from Facebook ads. Prompted by the sharks, he goes on to reveal that they’ve spent $460,000 to date on ads. 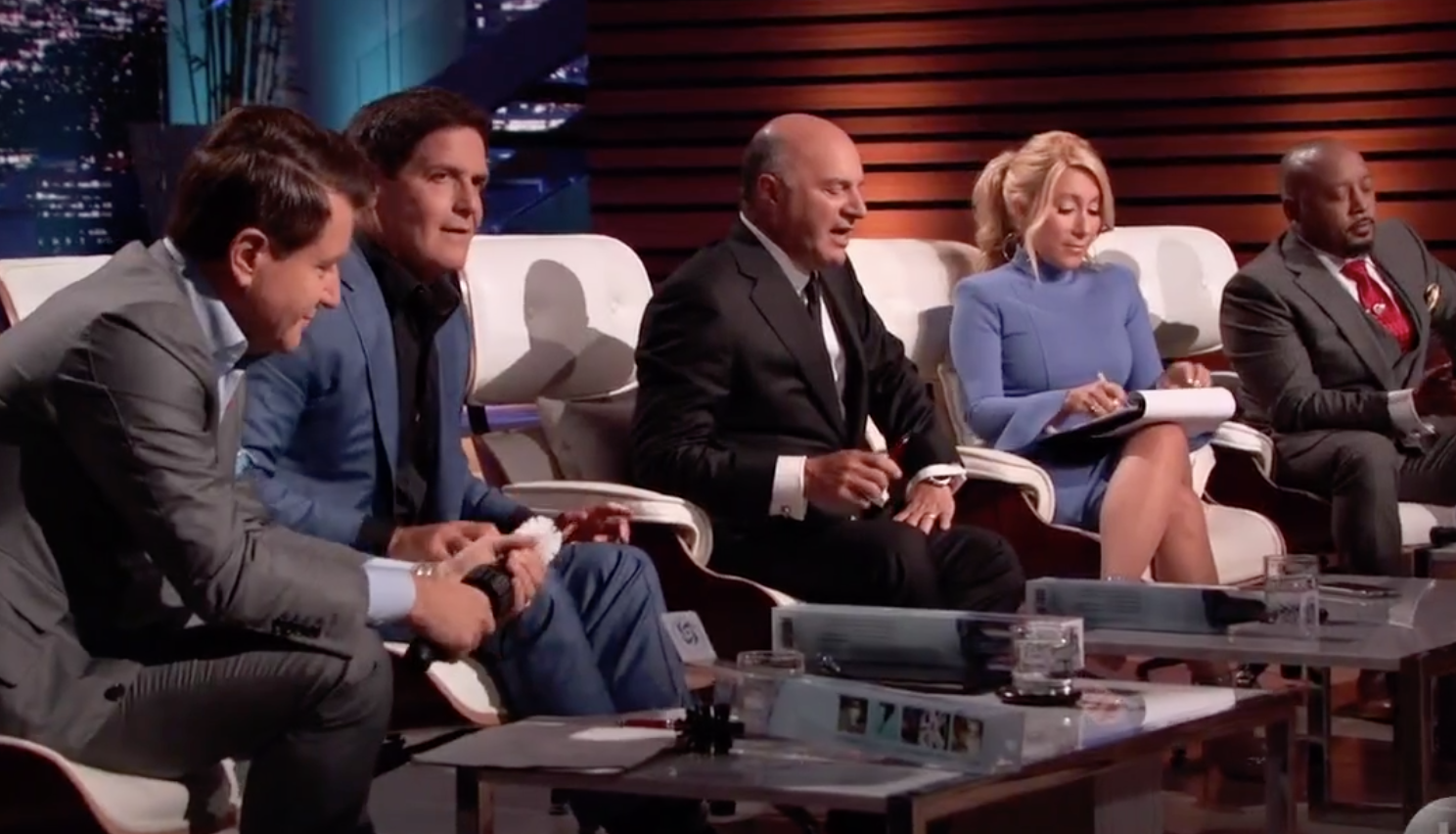 Just as he finishes talking, Mark asks about the conversion rate, to which they’re told that it resulted in $1.5 million in sales. As one thing leads to another, the founders reveal their projections for next year—$10 million. Shutting down their valuation, Robert lets them know that their company would only be valued at $1.7 million in the private sector. Continuing, he states that they would have to give up 33% of their equity to get $500,000.

Asked whether or not they would be willing to give up that much stake, Glenn replies no. In response, Robert predicts that they will not be getting a deal. Holding up the product in one hand, Lori inquires about the competitors on the market, to which she’s told that there are none. Elaborating, he comments that it’s difficult for devices that turn water in a low-pressure environment to produce torque.

Noting that he’s not “a cleaning guy”, Robert becomes the first to drop out just moments later. As the founders look on, Mark comments that it’s difficult for him “to make the distinction between pressure and the product’s mechanism”. Continuing, he predicts that they will have a challenging road ahead of them, in terms of others replicating their creation. Expressing the fact that the company doesn’t have “a long-term benefit”, he also backs out of a deal. With that, just three sharks remain.

Seconds later, Robert lets them know that they had “predefined their destiny” by saying no to 33% stake. Noting that their valuation is way too high, he makes it known that he will also be dropping out. As the founders look on nervously, Daymond eventually begins to speak. While he agrees with Robert that their valuation is absurd, he tells them that he enjoys working with those that he can help. Stating that he is interested in the “retail side”, he goes on to make them their first offer—$500,000 for a 25% stake. 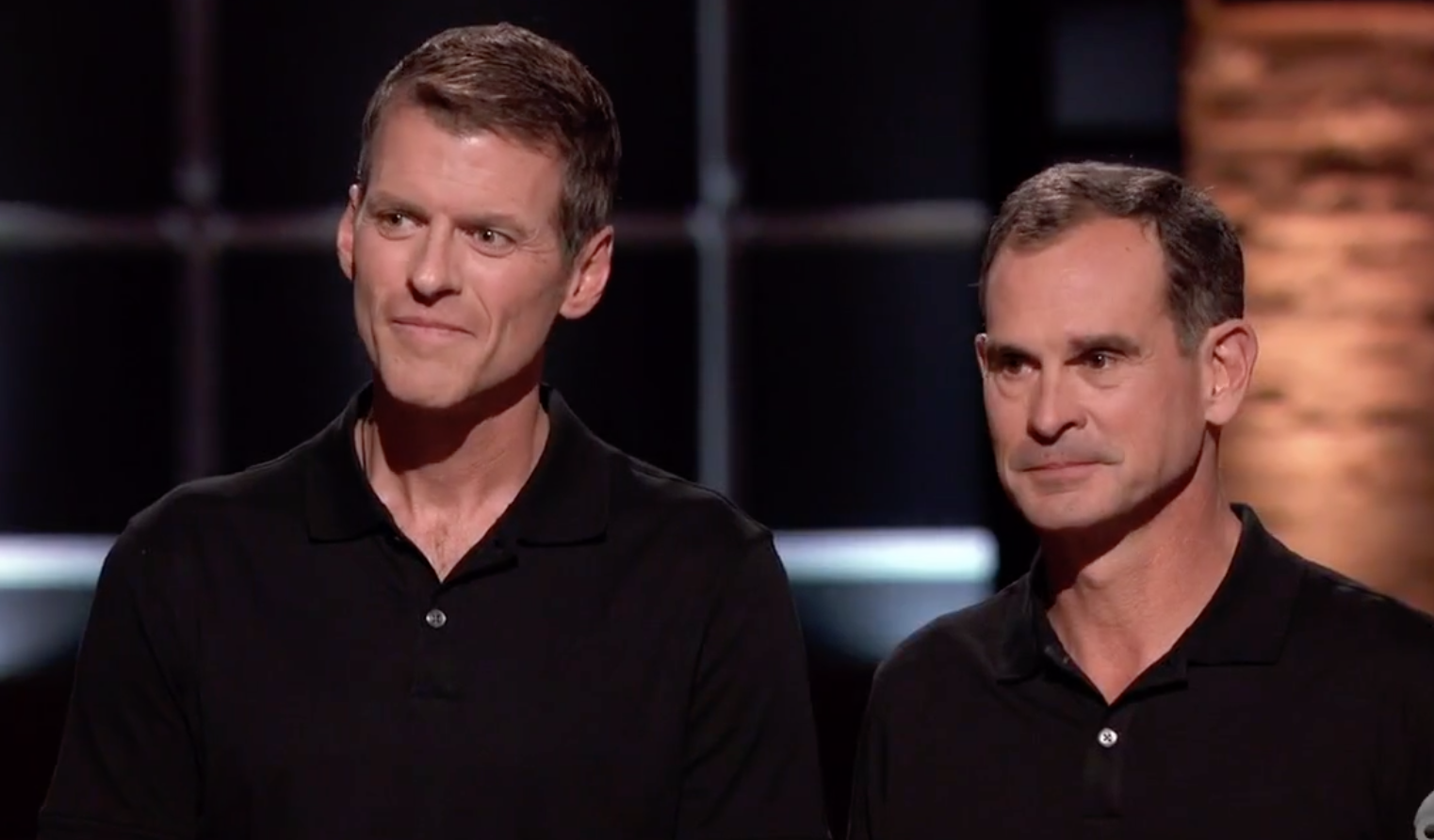 Before they have a chance to make a decision, Lori chimes in by saying that the product could do well in QVC. Noting that they could work well together, she also makes them an offer, one that matches the other shark’s—$500,000 for 25%. Explaining, she lets them know that she already had the numbers in mind, prior to Daymond’s offer. After talking among themselves, Glenn asks whether or not she would be willing to go down to 20% stake.

To their dismay, however, she shakes her head. Commenting that she’d have to do a lot of work, she stands her ground at 25%. From there, she reminds them that she has done over $170 million in sales with the Simply Fitboard in one year. With that, Kevin asks whether or not Daymond is willing to go down to 20%. After some deliberation, however, he states that he will also be staying at 20%.

Excusing themselves, Kevin and Glenn head backstage to discuss their options. With that, the sharks also begin to talk among themselves. Facing the rest of his peers, Robert eventually tells Daymond that there is a very similar product on the market, which causes him to waver. Not long afterward, the inventors return to the tank. Almost immediately afterward, Daymond asks whether or not there are other cleaning brushes out there that spin, to which he is told yes. Stating that he wasn’t aware of that fact, he soon withdraws his offer.

As if on cue, Lori eventually also has second thoughts. After some more brief discussion, she changes her offer to $250,000 as a loan at 7% interest, in addition to $250,000 for a 25% stake. Disappointed about the fact that she has changed her mind, Glenn goes on to say that it would be hard to work with those numbers. Pressed for a final answer, the pair ultimately decides to pass on Lori’s offer. Thanking them for their time, they eventually exit the tank.

It’s been many months since their appearance on Shark Tank. How is the Brush Hero doing nowadays?

Though they weren’t able to land a deal on the show, they did see an increase in sales thanks to the “Shark Tank Effect.” In fact, they have managed to land two major deals over the past several months–one with Costco in the U.S. and another with Canadian Tire in Canada. According to a recent interview with the founders, another deal is also in the works, though they haven’t revealed any details at this time.

Since their Shark Tank appearance, the Brush Hero has also been made available in several other countries. For instance, it can now also be found in Ireland, France, Italy, Germany, Japan…the list goes on.

In addition to the original Brush Hero, they’ve also come out with a maritime version that can be used underwater to clean boats, swimming pools, or hot tubs. Allegedly, it’s currently also being adapted for indoor use (i.e. to be attached to a shower head). In terms of what they have on the horizon, the team is now in the process of putting together Brush Hero 2.0, which they hope will be released in time for Christmas 2018.

Will we be seeing Glenn and Kevin back on the show for an update sometime in the future? Unfortunately, the chances are slim for now (especially since they weren’t able to land a deal). Regardless, it would appear that their company has grown tremendously over the past months. If anything, their profits are likely to go up with time.