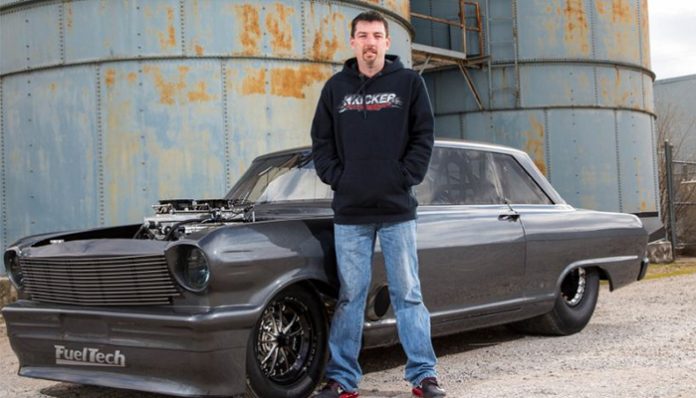 A television personality, David Comstock aka “Daddy Dave” is best known for his appearances on the reality series, Street Outlaws. Introduced in the first season, he has remained on the show ever since. Just recently, the eleventh season premiered in June 2018.

A former car technician, he has been passionate about street racing ever since he sat behind the wheel of his parent’s Chevy Impala at the age of sixteen. Today, he drives a 1996 GMC Sonoma S10 Pickup, which is jam-packed with a number of high-performance parts. With twenty-plus years of experience under his belt, he plans on staying at number one for a long time.

How wealthy is the reality TV star? How much is he paid for his appearances on Street Outlaws? Aside from television, what else is he involved with? How rich is he? According to various sites, Daddy Dave’s 2018 net worth is around $900,000. Where did he earn the majority of this from? We’ll be taking a closer look at his career below, be sure to stick around if you’re interested.

How did Daddy Dave Make His Money & Wealth?

Born on April 4, 1973, in Oklahoma, David Comstock aka “Daddy Dave” grew up in Shawnee with his brothers. At the age of sixteen, he developed a passion for cars after sitting behind the wheel of his parents’ 78’ Chevy Impala. Before he knew it, he had fallen for street racing. Sometime after finishing school, she began to work as a technician at Comstock Auto Service.

In 2009, he made his television debut in a reality series called Pinks. However, it wasn’t until a few years later, that he rose to fame as one of the main cast members of Street Outlaws. Premiered on June 10, 2013, the show revolves around the street racers in the Oklahoma racing scene. Aside from Daddy Dave, it also stars Big Chief, Murder Nova, Chuck, Flip, and Derek, to name a few.

Since then, Daddy Dave has starred on the show for several years―in fact, the eleventh season just recently premiered last month. His most prominent television appearance to date, it’s likely that he has earned a considerable amount from the series. With that said, his exact salary has not been disclosed to the public. If we were to make a guess, however, he probably makes a few tens of thousands per episode, if not more.

As far as other endeavours go, he also involves himself with various public events. For instance, he appeared as a special guest at the Wayne County Speedway in 2016, where the winner of the race had a chance to win $20,000.

Not only that, but he also runs a store called Daddy Dave Racing Performance Parts, which is based in Oklahoma City. Since its launch, he has been adding hundreds of new products to the catalog on a monthly basis. For those who are interested, you can visit the official website here. Given the number of items that he sells, it’s likely that he has made a decent amount of income from the store.

Yes, he has been married to his wife Cassi Comstock for many years.

Does Daddy Dave Have Any Children?

No, as far as we can tell, Daddy Dave does not have any children.

Did Daddy Dave Go to College?

Unfortunately, not much is known about Daddy Dave’s education background. As far as we know, he has not attended college.

What is Daddy Dave Famous For?

Daddy Dave rose to fame as one of the main street racers on the Discovery Channel’s reality series Street Outlaws. Premiered in 2013, the show remains to be his most prominent television credit to date.

Daddy Dave and his wife currently live in Oklahoma City, Oklahoma. We do not have any additional details at this time.

What Kind of Car Does Daddy Dave Drive?

How Much Money Did Daddy Dave Make Last Year?

Unfortunately, we do not have any information on Daddy Dave’s 2017 earnings at this time.

Over the past year, Daddy Dave has been pretty diligent about updating his official Facebook fan page on a regular basis. If you haven’t already done so, you can follow him on the site here.

Want to know what the street racer is up to? If so, you’ll want to follow him on social media―you can find Daddy Dave on Twitter at @DaddyDave_okc and on Instagram at @DaddyDaveandGoliath.