The Wingman After Shark Tank – 2018 Update 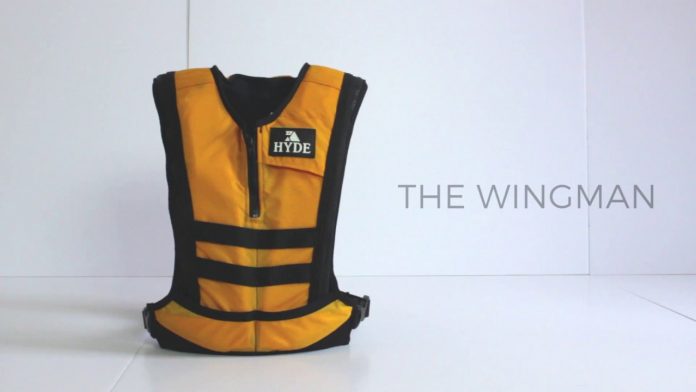 The Wingman Before Shark Tank

Two entrepreneurs enter the Shark Tank, and with them, they bring a promise of a discreet way to stay safer while in any body of water. These two are Pat Hughes and Mike Fox, the creators of The Wingman. They are seeking an investment of $200,000 in exchange for 12.5% equity stake in their company. The two of them are friends and business partners from Milwaukee, Wisconsin. They spend a lot of time in the water, but there was always one thing getting in their way – life jackets, of course.

The two demonstrate how The Wingman works – if you find yourself in an emergency, pull down the ripcord, and The Wingman floats you face-up in any position. Pat pulls on his ripcord, causing the life jacket to comically inflate, although the inflated plastic definitely looks quite buoyant. Even better, The Wingman can be used over and over again with refillable carbon dioxide tubes. With the right Shark, Pat and Mike can make The Wingman the leader in water safety. Saving one life would make the product worthwhile, but they know they can do a lot better than that. Which one of the Sharks want to blow the competition out of the water?

The Wingman On Shark Tank

Samples are distributed to all of the Sharks, including guest shark Sara Baker. They are all eager to “blast off,” and Mike encourages them to with one unit of The Wingman and three CO2 cartridges. Put the life jacket on, strap it underneath your arms, then just pull down on the ripcord like your life depends on it. Mike explains that the new CO2 cylinders are sold separately, and while he is explaining, Sara inflates her life jacket without buckling the jacket. The conversation is interrupted with a hiss as her jacket inflates. 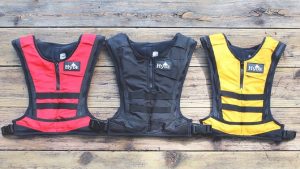 The Sharks all laugh and Sara asks how she can remove the jacket, while Mark jests that she can’t because she didn’t properly buckle it. Sara actually can’t get it off, and Mike has to help her remove The Wingman. The unit fully inflates, and a loud pop scares the Sharks. Laughter from the entire production crew can be heard at the scene, and Sara looks dizzy as she finally regains her composure.

You have to fasten The Wingman because the resistance allows the zipper to open, meaning you can take the life jacket off. Mark then asks if the idea requires some organizational approvement. Pat confirms that The Wingman is approved by the United States Coast Guard and that was actually a huge hurdle for them. Inflatable life jackets are not approved for activities where there’s a likelihood of hitting your head – like water-skiing, white-water kayaking, and other things there are a higher potential for becoming incapacitated.

Kevin then asks if there is another model that they could offer that automatically inflates when it detects water. Pat explains that the idea has always been their long-term vision, and they have always wanted to make it a smart device. However, he wants to explain more about where the idea came from – when he was in college a few years ago, he participated in his first triathlon. Sadly, another participant drowned during the race and he was saddened by how preventable that tragedy seemed. He thought, “there must be some type of piece of safety equipment you can wear in a race like this where if your mouth is submerged for 30 seconds, it knows that and deploys.”

Their ultimate goal is an end-all, be-all protocol for water safety. Sara points out that they are a long way from achieving that goal, but then asks if they believe that goal is achievable. The two of them nod their heads. The first step was getting a Coast Guard-approved fest in the ideal configuration, which is where they’re at right now. Kevin, however, wants to talk about revenue and asks how much they have made. Mark asks what they cost – the retail price for The Wingman is $249, and their landed cost is $65. In the past 10 months, they have shipped $120,000 worth of product. 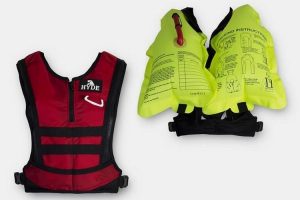 The bread-and-butter customers are kayakers, stand-up paddleboarders, surfers and fishermen. However, Kevin says that the purchase point is always at the marina, but he’s assuming they do not have any retail distribution. Not yet, but this is a big part of their sales model. Mark asks how low they can get the price down, since at $249 you have to be really dedicated and an enthusiast to show interest. However, they have been ordering such small quantities of The Wingman – typically less than a thousand, and once they start hitting better quantities, the price can come down.

Lori summarizes that the Wingman is lighter, thinner, and easier to store. It seems very smart to her, and if she had to put a life jacket on, she would want to be wearing that over anything she’s ever seen. She feels that it’s a little too early for her to be investing because she wants the two entrepreneurs to achieve their goals and become the “it” life vest. However, there are still so many hurdles so Lori is out of the deal first, leaving four other Sharks.

Sara explains that she hesitates to get involved in anything that is liability-focused where someone might actually not come out alive because of the use of the product. She’s also out, and makes a very valid point in that. Daymond thinks that the idea is super cool but it really is a super niche market in a very crowded space, so he’s also out of the deal. Two Sharks remain – Kevin and Mark.

Mark says that the market is incredibly tough and competitive. They have to spend a lot of money to get to the point where they make a lot of money, which is the unfortunate catch-22 that they might be running into. It’s just not a fit for Mark, so he’s out of the deal next, leaving just Mr. Wonderful himself. Kevin muses then looks at the two entrepreneurs – he is their last hope. However, he has not gone out yet, and he likes the product.

However, it’s so embryonic for Kevin that he doesn’t quite know what to do immediately. He eventually extends an offer of $200,000 in exchange for half of the company – 50% equity. Pat and Mike glance at each other while Mark jests that they shouldn’t call him Mr. Wonderful anymore. This is certainly more equity than they came into the Shark Tank looking to give up. The upside on the product is huge, but Lori asks if there is anything protectable about the idea that would make it more valuable.

The Wingman does have a U.S. Patent granted, which is a utility patent. The patent covers unique things that allow the vest to be made sleeker. The big thing was moving the CO2 cylinder to the back, and in order to get the lay-flat configuration, they needed a new type of zipper. They created a triple-bursting zipper that opens at both ends and in the back, and this is probably the biggest part of their patent. 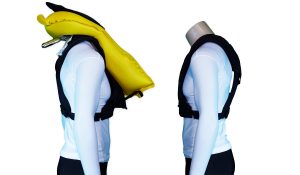 Kevin concedes that these attributes have merit, but they don’t change the distribution problem. The challenge is getting The Wingman to do $2 or $4 million in sales. Pat explains that they have never been on a cycle from a retail perspective, and they’re about to go to three of the biggest industry trade shows. However, Kevin cares about right now – he knows what the risks and opportunities are.

Pat and Mike fire back with $200,000 in exchange for 20%, which Kevin denies immediately; it’s not an interesting offer to him. He is impressed that they got the Coast Guard to endorse it. This, he’s learned, matters a lot. They are just so far from distribution. Most people that come into the Shark Tank don’t get any offers at all, but they have one and it’s their last hope since nobody else made an offer.

Pat and Mike return another counter-offer, which is $200,000 in exchange for 25%. This still isn’t enough for Kevin. Unfortunately, they decline Kevin’s proposed offer of splitting the ownership and leave the Shark Tank without finding an investor for The Wingman.

The Wingman’s parent company is now Hyde, and the product has dropped down to a price of $199. It’s available in four colors, including black, red, tangerine, and camo. The Wingman is a one-size fits all design, and is approved for chest sizes between 30 and 50 inches for adults weighing more than 90 pounds. The CO2 cartridges are sold as a kit, and each kit includes a CO2 cylinder and a green indicator pin that shows the charge is primed.

The Wingman is available on Amazon, although it only has a meager 4 customer reviews for a weak 3.5-star rating. Of the four reviews, half of them are five star, one is two star and one is one star. The zipper comes undone easily, and the life jacket can inflate on its own or even deflate. It appears that the ripcord which triggers the CO2 inflation is a bit sensitive. I don’t think that The Wingman will grab the sales that they hoped it did, as it seems like an acceleration of the product is rather slow. However, they are sitting on a genius patent and a genius idea, so it won’t be surprising to hear that The Wingman and Hyde were bought out by a bigger name in the aquatics arena like 3MM or Cressi, some of the world’s most notable leaders in watersport activity.