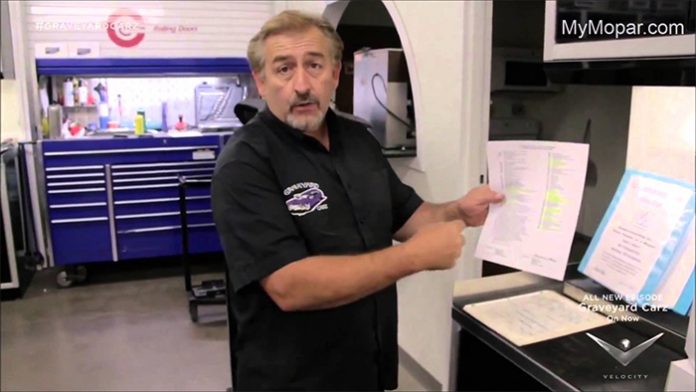 A television personality, Mark Woman is best known for his appearances on Graveyard Carz. Premiered in 2012, the reality program centers around the restoration of the late ‘60s and early ‘70s era vehicles in his collision shop, Welby’s Car Care. Not only does he star in the show, but he’s also contributed behind-the-scenes as an executive producer. As of 2018, it is currently on its ninth season.

In terms of other projects, he had produced a short film called Trinket in 2014. At one point in 2011, he also made a guest appearance in the news talk show, LA Business Today.

How wealthy is the car enthusiast? How much does he make from starring on Velocity’s Graveyard Carz? How lucrative is his career on reality TV? According to various sites, Mark Worman’s 2018 net worth stands at approximately $500,000. How much of this came from his work on television? Let’s have a look below.

How did Mark Worman Make His Money & Wealth?

Born on August 21, 1962, in Eugene, Oregon, Mark Woman grew up with his older sister, Tara. Raised in Springfield, his childhood was rather challenging. Not only did he lose his father at the age of twelve, but he himself also battled with health issues. Eventually dropping out of high school during the ninth grade, he took on several different jobs to support himself during his teens.

In the end, it wasn’t until a few years later that he received his high school diploma through a program at Lane Community College. Shortly afterward, he purchased his first vehicle, a ‘70s Dodge Charger with 383 two-barrels, at the age of sixteen.

Since then, he has successfully made a name for himself in the car business. In fact, he operates his own auto shop called Welby’s Car Care in Springfield, Oregon. If anything, it has proved to be a successful venture over the past years.

In 2012, he landed his own reality series titled, Graveyard Cars, which centers around his car shop. Created in-part by Worman himself, the program mainly features the restoration of late ‘60s and early ‘70s Mopar muscle cars. Aside from him, the show also stars Allysa Rose, Royal Yoakum, Will Scott, Josh Rose, and Dave Rea, to name a few.

Popular among viewers, Graveyard Carz has since continued for nine seasons. In fact, the latest season had just recently wrapped up on May 30, 2018. Though it hasn’t been confirmed, it’s likely that the show will be returning for a tenth season.

Responsible for his rise to fame on reality TV, there’s no doubt that Worman receives a hefty amount for starring on the show. With that said, his salary has not been disclosed to the public. If anything though, it’s likely that the series has been contributing significantly to his overall income since its debut in 2012.

Aside from what he makes from his work on television, there is, of course, his car business. If their online ratings are anything to go by, it would appear that they’re doing fairly well.

While he is married, not much has been revealed about his wife.

Does Mark Worman Have Any Children?

Yes, he has a grown daughter named Allysa Rose, who also stars on the show.

Does Mark Worman Go to College?

Not much is known about Mark Worman’s education background at this time. As far as we can tell though, he has not gone to college.

What is Mark Worman Famous For?

Mark Worman is best known for his appearances in Velocity’s Graveyard Carz, a popular reality series that debuted in 2012.

Mark Worman currently lives in Springfield, Oregon, where he operates his car restoration business. We do not have any pictures of his abode at this time.

What Kind of Car Does Mark Worman Drive?

Details on Mark Worman’s vehicle is not available at this time.

How Much Money Did Mark Worman Make Last Year?

Unfortunately, we do not have any information on Mark Worman’s 2017 earnings at this time.

Most recently, Mark Worman returned for the ninth season of Graveyard Carz, which ran from March 7, 2018, to May 30, 2018. For now, a tenth season has not yet been confirmed by the network.

What’s the car enthusiast up to? If you’re a fan of Graveyard Carz, be sure to follow Mark Woman on social media—you can find him on Twitter at @GYC_Mark. Alternatively, you can show your support on his official Facebook fan page, which you can check out by clicking here.