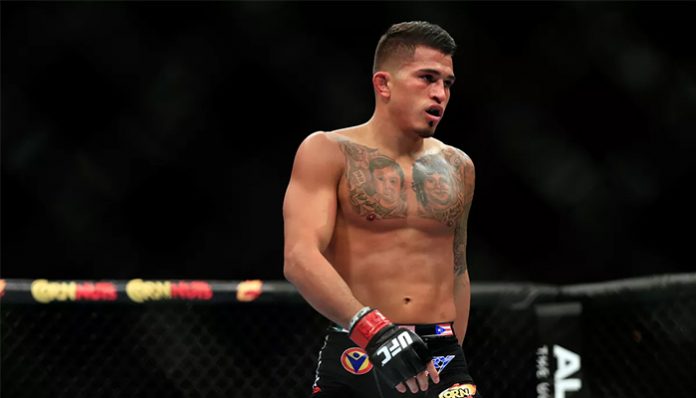 A professional mixed martial artist, Anthony Pettis is the former UFC Lightweight Champion, with over 20 wins to his name. After defeating Benson Henderson, he also became the final WEC Light Champion in 2010 (the WEC later merged with the UFC). As of 2018, he ranks eighth in the official UFC Lightweight rankings.

Over the years, he has been featured in several television programs such as World Extreme Cagefighting, WI MMA Today, UFC Ultimate Insider, UFC on Fox and UFC Embedded: Blog Series. Most recently, he starred in the TV special, UFC 226: Miocic vs. Cormier earlier this year.

How wealthy is the 31-year-old athlete? How lucrative is his professional MMA career? How much does he win per match? According to some sources, Anthony Pettis’ 2018 net worth sits at an estimated $2.5 million. Where did he earn the bulk of this from? What other things does he have going for him? Let’s take a look.

How did Anthony Pettis Make His Money & Wealth?

Born on January 27, 1987, in Milwaukee, Wisconsin, Anthony Pettis grew up on the south side of the city with his two brothers, Sergio and Ray, the former of whom is also a professional martial artist. At the age of five, he took up both boxing and taekwondo. By the time he graduated from high school, he had already received a black belt in the former.

At the age of twenty, he made his professional MMA debut in 2007. Shortly afterward, he participated in his first World Extreme Cagefighting match; from there, he eventually went on to win the Gladiator Fighting Series. Coached by Duke Roufus, he trains with several other fighters including Danny Downes, Ben Rothwell, Ben Askren, and Alan Belcher.

Two years later, he was set to make his promotional debut at WEC 40. Due to a hand injury, however, he was forced to withdraw. In the end, it wasn’t until WEC 41, that he made his debut, where he won against Mike Campbell with the use of a triangle choke. Several months later, he received his first professional loss at WEC 45 to Bart Palaszewski.

Continuing with his MMA career, he participated in many fights in 2010. Perhaps the most notable, however, is his match against Benson Henderson at WEC 53. After defeating him, he became the final WEC Lightweight Champion, as the promotion merged with UFC shortly afterward.

Since then, he has fought against many opponents including Clay Guida, Jeremy Stephens, Joe Lauzon, Donald Cerrone, and Rafael dos Anjos. Earlier this year, he had also planned on fighting Khabib Nurmagomedov in hopes of receiving $1 million, though the deal ultimately fell through as the UFC declined to pay the money. At the UFC 226, which took place this summer, he won against Michael Chiesa, a feat that garnered him a Performance of the Night award.

As far as television appearances go, he has been featured in a number of programs such as DUB Latino, WI MMA Today, UFC Ultimate Insider, UFC on Fox and The Ultimate Fighter.

No, as far as we know, Anthony Pettis is not married. In the past, he had a girlfriend named Alexandra.

Does Anthony Pettis Have Any Children?

Yes, he has a daughter named Aria with his ex-girlfriend, who was born in 2011.

Does Anthony Pettis Go to College?

Yes, he attended college. In fact, it was then that he got involved with wrestling.

What is Anthony Pettis Famous For?

Anthony Pettis is best known for his accomplishments in the UFC as a professional mixed martial artist.  As of 2018, he is among the Top 10 in the official UFC lightweight rankings.

Unfortunately, we do not have any information on Anthony Pettis’ location at this time, nor do we have any pictures of his home.

What Kind of Car Does Anthony Pettis Drive?

Details on Anthony Pettis’ vehicle is not available at this time.

How Much Money Did Anthony Pettis Make Last Year?

Information on Anthony Pettis’ 2017 salary has not been disclosed.

At UFC 226 earlier this year, Pettis won against Michael Chiesa, which earned him a cash bonus of $500,000. Later this fall, he will be facing against Tony Ferguson at UFC 229.

What is Anthony Pettis up to nowadays? Curious about his latest activities? If so, why not follow him on social media? You can find him on Instagram and Twitter at @Showtimepettis. On Facebook, he also has an official fan page that you can check out by clicking here.