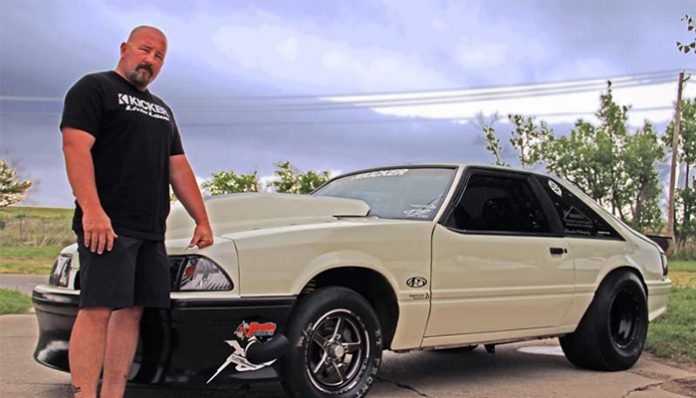 Noted for his outspoken personality, Chuck Seitsinger—better known by fans as simply Chuck—rose to fame in the reality series, Street Outlaws. The owner of a 1989 Ford Fox Body Mustang, he has been on the tracks ever since he was old enough to drive.

One of the main cast members, he has been featured on the show for five years. In fact, the twelfth season had recently just premiered in on the Discovery Channel earlier this year. Outside of his television career, he runs a successful car repair shop called, Advanced Motorsports.

How wealthy is the reality star? How much does he earn from winning races? Does he receive a salary for being on Street Outlaws? According to some sites, Chuck Seitsinger’s net worth stands at an estimated $850,000. What contributes the most to his income? How much of this is from his television career? Let’s find out.

How did Chuck Seitsinger Make His Money & Wealth?

Born on February 18, 1970, in Oklahoma, Chuck Seitsinger grew up in Oklahoma City, where he discovered his passion for cars at a young age. A student at Edmond Memorial High School, he was only sixteen when he started to work on vehicles. After graduating, he landed a job with Honda as a technician. From there, he attended various workshops to become a certified Factory Trainer Technician with the company.

Having always been fond of racing, he began to build his current race car, an ’89 Ford Fox Body Mustang in 2001. Within a few years, he had won both the NDRA Rookie of the Year and NOPI XBOX Cup Champion titles. Of course, the feat had also earned him a hefty amount of prize money.

In 2013, Chuck began to star in a reality program titled, Street Outlaws. As its name implies, it revolves around the world of street racing in Oklahoma City. One of the racers featured on the show, he made his debut in the series premiere, alongside several others including Flip, Big Chief, and Murder Nova, to name a few.

Debuted on June 10, 2013, Street Outlaws quickly proved to be popular among viewers, who would tune in every week for the races. As of 2018, the show has been renewed for twelve seasons. Considering how it’s a big hit, it’s likely that each of the main cast members receives a considerable amount for their television appearances. With that said, the exact details behind their salaries have not been revealed to the public. How much has Chuck earned from the show? Likely in the tens of thousands per season.

When he isn’t filming for the reality program, Chuck runs a successful car repair shop called Alternative Motorsports in Oklahoma City, Oklahoma. Judging by some of the stellar reviews left by past customers, it’s probably safe to say that the company is doing fairly well. If anything, the majority of his overall income likely comes from the business. For more information, you can visit their official Facebook page here.

Yes, as far as we can tell, Chuck Seitsinger has been married for many years.

Does Chuck Seitsinger Have Any Children?

Yes, he does. A father of three, he and his wife have three daughters; currently, their oldest daughter, Chelsea is studying veterinary medicine at Oklahoma State University.

Does Chuck Seitsinger Go to College?

Not much is known about Chuck Seitsinger’s education history at this time.

What is Chuck Seitsinger Famous For?

Chuck Seitsinger is best known for his appearances on Street Outlaws. As of 2018, he has been featured in all twelve seasons of the show.

Chuck Seitsinger currently resides in Oklahoma City, Oklahoma, with his family, where he owns a successful car repair shop.

What Kind of Car Does Chuck Seitsinger Drive?

He currently drives an ’89 Ford Fox Body Mustang, that has been fitted with a 429 Cubic Inch Chevy SBC Motor, according to his official bio.

How Much Money Did Chuck Seitsinger Make Last Year?

Details on Chuck Seitsinger’ 2017 salary is not available at this time.

Most recently, Chuck starred in the twelfth season of Street Outlaws, which aired in the summer of 2018. When he isn’t working on the reality show, he spends his time at his auto repair shop.

What’s Chuck up to? If you want to keep up with his latest updates, why not follow him on social media? You can find him on Twitter at @StOutlawsChuck or on Instagram at @StreetOutlawschuck. On Facebook, he also has an official page set up, which you can check out here.