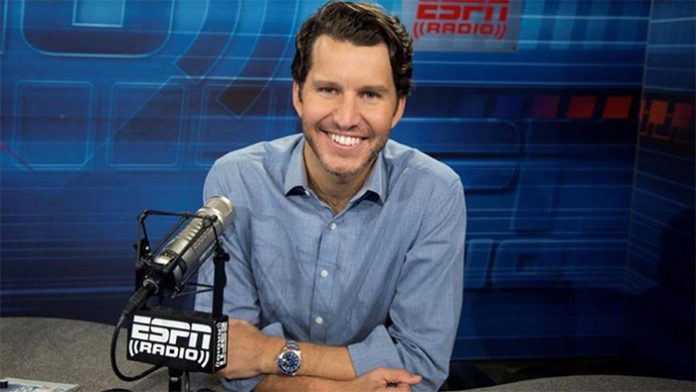 A sports broadcaster, Will Cain is perhaps best known as the host of The Will Cain Show. Premiered in 2018, the radio show is noted for offering listeners an unfiltered take on some of the sports world’s biggest stories.

A former political analyst, he launched his television career working for The Blaze and CNN in the early 2010’s. Some of the programs that he has been featured in over the years include Hannity, Erin Burnett OutFront, Crossfire, The View, Mike & Mike and Real Time with Bill Maher. For the past several months, he has also been appearing on ESPN First Take.

How wealthy is the radio host? How successful is he in the sports industry? How lucrative is his television career? Unfortunately, information on Will Cain’s net worth is not available at this time. In the meantime, let’s take a more detailed look at some of his accomplishments.

How did Will Cain Make His Money & Wealth?

Born on March 28, 1975, in Texas, Will Cain was raised in the city of Sherman with his younger brother. Upon finishing high school, he moved to California, where he attended the Pepperdine University of Malibu. Sometime afterward, he studied the University of Texas School of Law. Following his father’s death in 2001, he returned to Texas to take care of his brother.

Sometime later, he launched his television career with CNN and The Blaze. A political analyst, he appeared in a wide range of programs in the late 2000’s. At one point, he even hosted the shows In the Arena and Starting Point. On different occasions, he was also featured on Fox News, MSNBC and ABC. Despite the fact that he was a licensed attorney in Texas, it quickly became obvious that he had no interest in practicing the law.

Several years later, he reached a turning point after joining ESPN in the spring of 2015. Founded in 1979, the network is one of the largest sports channels in the United States. Almost immediately afterward, he began to appear in shows such as First Take and E:60.

Since then, his notoriety has only increased. In early 2018, he was given his own show, The Will Cain Show. Debuted on ESPN Radio, the program is noted for offering listeners an unfiltered take on the sports world’s biggest stories. For those who are interested, you can visit its official website here.

How much has he earned from his career with ESPN? While the exact numbers behind his salary have not been disclosed, it’s said that an ESPN anchor makes upwards of $70,000 a year. Considering his recent popularity boost with the radio show, chances are, his earnings are not all that shabby.

Aside from hosting The Will Cain Show, he has appeared in a couple of other shows over the past months; these include The Stephen A. Smith Show and ESPN First Take. From 2016 to 2017, he also contributed to Mike & Mike as a substitute host.

Will Cain’s Personal Life and FAQ:

Is Will Cain Married?

Yes, he has been married to his wife Kathleen Cain since 2016.

Does Will Cain Have Any Children?

Yes, he does. A father of two, Will Cain and his wife have two sons named West and Charlie.

Does Will Cain Go to College?

Yes, he went to college. After high school, he attended the Pepperdine University of Malibu in California, before continuing his education at the University of Texas School of Law. Although he hasn’t practiced that law, he is a licensed attorney in Texas.

What is Will Cain Famous For?

Will Cain rose to fame after joining ESPN in 2015. Since then, his notoriety has increased further with the premiere of The Will Cain Show.

Where Does Will Cain Live now? Photos of Will Cain’s House

According to his official Twitter page, Will Cain currently splits his time between New York and Texas. We do not have any pictures of his home at this time.

What Kind of Car Does Will Cain Drive?

How Much Money Did Will Cain Make Last Year?

Details on Will Cain’s 2017 salary is not available at this time.

As mentioned earlier, he began to host The Will Cain Show on ESPN Radio in January 2018. On television, he has also made recent appearances on ESPN First Take and The Stephen A. Smith Show.

What’s the radio host up to nowadays? If you want to keep up with his latest news, be sure to follow him on social media—you can find Will Cain on Twitter at @WillCain or on Instagram at @thewillcainshow. On Facebook, you can also show your support on his official page.