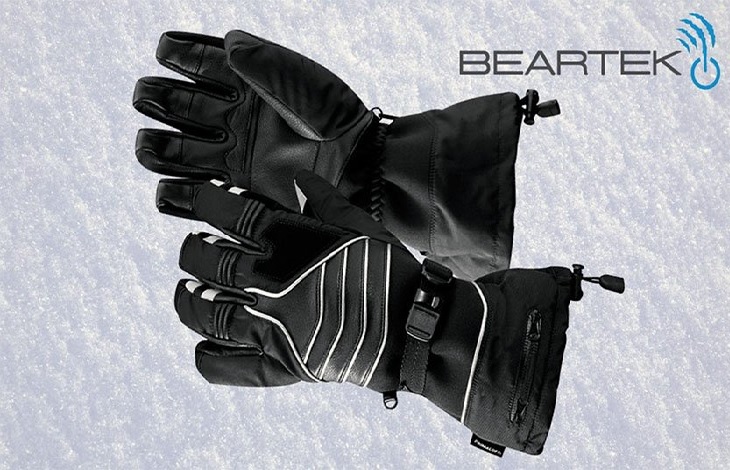 Willie Blount from Colombia and his cousin, Tarik Rodgers from Dallas, developed the BearTek glove system that made controlling a device as easy as clicking your fingers. Keen Skier Tarik wanted a device that would allow him to easily take pictures, answer calls, listen to music and control apps when he was out on the slopes.

He spoke to his cousin about the idea, and Willie, who had studied electronic theory for six years during his time in the marine corps, thought he was on to something. Willie was a keen motorcyclist and had always found his inability to control music safely, whilst riding, to be not only frustrating, but also a common problem amongst his fellow riders.

Together the pair founded a partnership, and after eighteen months of research, development and testing they finally had a working product, the BearTek Glove system.

In the summer of 2015, after being repeatedly told by friends to apply for the show, the BearTek entrepreneurs sent some employees to an open casting session for Shark Tank. They knew that less than 1% of applicants were successful and had little hope for being selected, however they were in luck. They were selected for an appearance, and finally appeared on the show in February 2016.

It was a slightly unsettling sight for the sharks as Willie and Tarik entered the tank, Tarik was dressed in Ski Gear, complete with poles and goggles. Willie, with his helmet tucked underarm, seemed as if he had just arrived from the racetrack.

The pair introduced themselves, loudly and confidently, because Willie and Tarik are confident guys and they talk in the kind of booming voice that you hear from ring announcers. When Tarik announced he was from Dallas he got a Whoop of recognition from fellow Texas native Mark Cuban.

It was a great first ten seconds for the pair, but then they spoiled the mood by announcing that they were looking for a $500,000 investment in exchange for 5% equity in their business.

The sharks never react too well to a valuation of $10 million, particularly when an entrepreneur is offering them a paltry 5% equity. There were shrieks of disbelief as the BearTek pair revealed the deal they hoped to make on the show.

Undaunted, Tarik continued into the pitch. He touted the safety implications of the gloves, for both motorcyclists and skiers. He demonstrated changing music tracks, and adjusting volume, on his own gloves for the sharks. They seemed impressed, but they didn’t seem impressed enough to part with half a million dollars for 5% of the business.

Willie continued with the pitch, he explained that music was just the beginning. He and Tarik could see many applications for their product in the future.

Tarik elaborated ‘We are not just a product, we are a Tech company’. Willie concluded by telling the sharks ‘With your help, we can become a Tech empire’.

Mark Cuban commented ‘Great presentation guys’ and it was, the pitch had been professional and enthusiastic, and the product demonstration had gone well. Unfortunately, it was the valuation that all the sharks were thinking about.

Robert quizzed the pair about sales, and Tarik revealed that they had sold $200,000 worth of products in the last 15 months, but Robert seemed unimpressed, and expressed doubts about the $10 million valuation.

Mark Cuban asked about their backgrounds and Willie detailed his electrical training in the marines. He explained how he had wanted a safe remote to use while riding his bike, and he had utilized the Marine motto of ‘Improvise, adapt and overcome’ to devise a solution. Tarik had brought inspiration as well as business knowledge to the partnership, he had also funded the initial development phase.

Robert asked Tarik how much money he had invested in BearTek, and Tarik admitted he had tied up $500,000 of his own money into the business. That impressed the sharks more than anything and they seemed just a tiny bit more interested now, knowing that Tarik had made such a substantial personal investment.

Robert went back to the valuation, he asked why BearTek was worth $10 million. Tarik explained that the company was starting to be approached by military companies, who were interested in using the BearTek technology, he told Robert the potential sales could be huge.

Robert still wasn’t happy, he told the two entrepreneurs ‘I’m expecting you to go beyond gloves, I’m not going to pay $500,000 for a glove company’.

Kevin O’Leary could see the writing on the wall for Willie and Tarik. He gave them a warning of the likely outcome ‘I fear you’re not going to get a deal here’.

Daymond clicked his BearTek gloved fingers and said ‘I’m clicking my fingers together here, trying to find out why you’re worth $10 million, its not working’. Tarik made an attempt to explain how popular the gloves could be but he was interrupted by Mr Wonderful.

Kevin pointed out the BearTek gloves were not the only product that controlled devices remotely, he referred to some of the voice activated helmet communicators that are currently on the market.

Willie explained that voice recognition, although far more advanced than it had been a few years previously, was still more unreliable than the BearTek gloves, words could still be misinterpreted by the software, and the systems could take time to calibrate for different users.

Kevin O’Leary was generally in agreement with Willie. He accepted that BearTek may be a good alternative for all the competing systems available, but he added that it was possible the market had passed BearTek by. Kevin wasn’t going to hang around to find out either way, and announced he was dropping out of the negotiations.

Mark Cuban was less positive. Clearly thinking of the high valuation, he told the entrepreneurs that the potential rewards were far outweighed by the risks, and for that reason he was out too.

Daymond agreed with Kevin about the potential market for BearTek gloves, he said there was ‘merit’ in the idea, but the $10 million valuation put Willie and Tarik in ‘a different universe’ from him. He told them he wasn’t even going to make an offer, despite his interest, and with that Daymond dropped out.

Robert Herjavec couldn’t see the business away from the gloves. He told Tarik ‘I don’t want to be in the glove business for $10 million’. Tarik responded with ‘Neither do we’. But Robert had made his mind up, he explained that Tarik and Willie had failed to show him how they would move the business beyond gloves, and because of that, he was out. That left Lori Greiner as the only remaining shark involved.

Willie made one final attempt to get Lori to share his vision. He told her BearTek couldn’t produce a vast range of different gloves to suit all styles, but the business was not about gloves, it was about the technology behind the gloves.

Lori nodded her head, she agreed that there was something to the business. She believed that Willie and Tarik had a potential winner with their product, but they were not yet at the stage where they could accurately identify their potential market. The company faced too many unknown factors, and due to that uncertainty, Lori dropped out too, leaving BearTek without a deal in the tank.

As Tarik and Willie left the tank, Kevin said ‘If ever there’s a deal that tells you valuation matters it’s this one’. Mark Cuban didn’t agree and tried to argue the point, but Mr Wonderful wasn’t going to let this one slide. ‘Why didn’t you write them a check then?’ he asked Mark, before he answered the question himself, ‘Because you think it’s a piece of crap’.

Mark Cuban gave up the argument at that point and laughed at Kevin’s brutal analysis instead.

BearTek Now In 2023 – The After Shark Tank Update

Willie and Tarik remained determined despite not landing a deal. In need of funds, he launched an IndieGoGo campaign the day their episode aired. Thanks to the publicity they received from the show, they ended up raising $60,000 within a few days, which was well above their goal of $40,000.

As far as we can tell, however, nothing ever came out of it. In fact, they later posted an update on March 17, 2016, saying that they’ll be refunding all of the backers as they’re not sure when the product will be ready to be shipped. And that was the last time anyone ever heard from them. Despite having ended the post with “stay tuned”, they never came back with another update. Their website also went dark shortly afterward (the domain has since been purchased and repurposed into an adult website), followed by their social media accounts.

Interestingly enough, the Bluetooth gloves eventually made it on Amazon. In fact, they’re still available as of 2023. Having said that, the product doesn’t have any reviews on the site at all, which makes us wonder whether or not they’re actually selling. They’re also sold by a third-party seller called “SunnyDay Electronics”, which is interesting, to say the least. Are Willie and Tarik behind it? Probably not since they sell a variety of electronic goods. But then where did they get their hands on the BearTek Gloves? For now, your guess is as best as ours.

What are Willie and Tarik up to nowadays? According to LinkedIn, Willie founded a gaming company called Next Level Gaming and Entertainment in January 2021, which provides mobile gaming services at various events such as birthday parties and tournaments.

Prior to that, he founded KNX Mounts, which was active up until August 2021 (we couldn’t find any information about the company). Around that same time, he left his Director of Information Systems Position at the US House of Representatives.

As for Tarik, he’s currently the SVP at Citigroup. Prior to that, he worked as an Interim Plant Manager and Business Unit Manager at Sanmina from April 2018 to March 2021. And before that, he was the VP of Strategy and Operations at Skin Specialists of Allen (it was where he was working when he co-founded BearTek Gloves).

Needless to say, it looks like they’ve moved on to other endeavors. Perhaps they sold the BearTek Gloves? That would explain how the product is available on Amazon under a third-party seller. One thing is for sure, though, we probably won’t be seeing Willie and Tarik back in the tank anytime soon.