What Happened to NSYNC – 2023 Updates 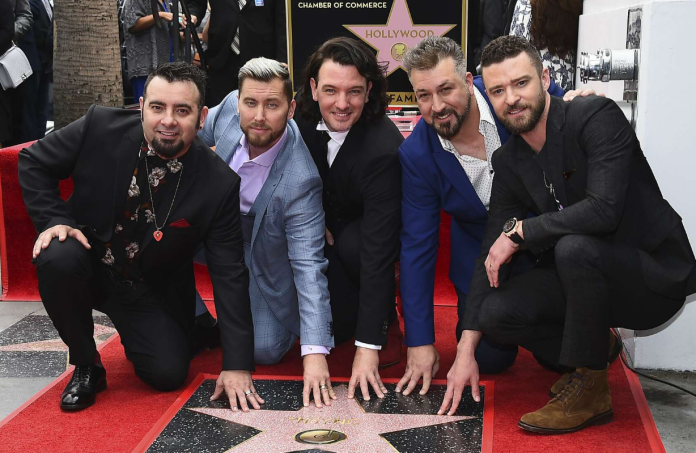 NSYNC rose to fame in the late 90s with the release of their self-titled album. They eventually went on hiatus in 2002. Where are they now in 2023?

Lou Pearlman, a record producer, was interested in starting a group after seeing Chris Kirkpatrick, whom he was introduced to by a mutual friend, perform. The latter jumped at the opportunity and eventually recruited Justin Timberlake, who had previous appeared in The Mickey Mouse Club. Timberlake then recommended JC Chasez, whom he had written demos with previously. Chasez agreed and together, the trio began their search for a baritone, travelling to Orlando, Florida, in the process.

They eventually met Joey Fatone, a friend of Kirkpatrick’s from when he worked at Universal Studios Florida. And after several auditions, they recruited Jason Galasso to be their bass singer. Naming themselves NSYNC, which is a play on the last letter of their names, they began rehearsing together, with the goal of signing with Pearlman’s record label.

However, Galasso wasn’t happy about their musical direction, which led him to drop out at the last minute. In need of a bass, the group went on to meet several people without success. Desperate, Timberlake eventually contacted his vocal coach, who recommended Lance Bass, a teen from Mississippi, and after a successful audition, he was accepted into the band.

Pearlman subsequently moved them into a house together in Orlando, where they began to practice their singing and dance routines. Johnny Wright also agreed to manage the band, despite also working with the Backstreet Boys, after seeing the group perform. With that, they signed a recording deal with BMG Ariola Much.

Shortly afterward, they were sent to Sweden to record their debut album. Their debut single, “I Want You Back” was eventually released on October 7, 1996, in Germany. Written by Max Martin, the dance-pop song reached the top 10 in Germany, Canada, New Zealand, and Switzerland. It also peaked at number one in the Netherlands.

Breaking Into the US Market

Their self-titled album was later released internationally through RCA Records. A mix of pop, R&B, teen pop, and dance-pop, it consisted of 14 tracks including “More Than a Feeling”, “For the Girls Who Has Everything”, “Tearing’ Up My Heart”, “I Need Love” and “Giddy Up”. Despite mediocre reviews, it was a commercial success, peaking at number two on the Billboard 200 and at number 30 in the UK. It also charted in several other countries including New Zealand, Canada, Malaysia, Denmark, and Norway.

To showcase the album, they embarked on an 18-month tour, which consisted of more than 200 performances. The first show was held at the House of Blues in Lake Buena Vista and the last concert was at the Blaisdell Arena in Honolulu.

Their next project, a holiday album titled, Home For Christmas, came out in 1998. Released exclusively in the US, it featured the Christmas classics, “The First Noel” and “O Holy Night” and also included originals such as “I Guess It’s Christmas Time”, “Love’s In Our Hearts On Christmas Day”, “The Only Gift”, and “The Christmas Song.” While it was met with lukewarm reviews, it reached as high as number five on the Top Holiday Albums Chart.

A year later, the group found themselves in a legal battle with Pearlman, whom they believed had illicit business practices. They went on to sue him and his company for defrauding them of their earnings and even threatened to leave for Jive Records. Pearlman and the company subsequently countersued the group for $150 million. The two parties later reached a settlement for an undisclosed amount out of court.

Signing with Jives, they released their next track, “Bye Bye Bye” in January 2000. Written and produced by Jake Schulze and Kristian Lundin, it reached number four on the Billboard Hot 100 and within the top 10 in Denmark, Finland, Greece, Italy, Hungary, Norway, Spain, and several other countries. Not only that, but it was also nominated for two Grammy Awards—one for “Record of the Year” and another for “Best Pop Performance by a Group with Vocal.”

The accompanying album, No Strings Attached, came out just two months later. Met with positive reviews from critics, it entered the Billboard 200 at number one with more than 2.4 million copies sold in the first week. It was also an international success, having topped the charts in Canada and Malaysia. To promote the album, the group also embarked on their third concert tour, which consisted of 82 sold-out shows across North America.

To date, No Strings Attached remains to be one of the best-selling albums of all time according to SoundScan.

Their fourth and final album, Celebrity, came out on July 24, 2001. As with their previous release, numerous producers worked on the album including Brian McKnight, the Neptunes, BT, and Rodney Jerkins. JC Chasez and Justin Timberlake also co-wrote 10 of the songs, including “Pop”, “The Game Is Over”, “Girlfriend”, “Celebrity”, “The Two of Us”, “Up Against the Wall”, “Selfish”, “See Right Through You”, and “Something Like You”, and “Gone.”

Praised by critics, the album entered the Billboard 200 music chart at number one with more than 1.8 million first-week sales. It also charted within the top 10 in Malaysia, New Zealand, Iceland, Germany, Denmark, and Canada.

To promote Celebrity, they hit the road for a four-month tour- the PopOdyssey Tour- which earned more than $90 million, making it one of the highest-grossing tours of the year. Not only that, but they also embarked on the Celebrity Tour to showcase the album further, which earned an additional $30 million.

That same year, the group starred in a comedy film titled, Longshot, which also starred the members of Natural, O-Town, LFO, as well as Britney Spears and Lil’ Kim. Released on October 25, 2001, the movie tells the story of Alex Taylor, a young boy who gets caught up in various gigolo activities.

Following the concert tour, Timberlake, who was interested in recording a solo album, suggested that they go on hiatus. While it was meant to be temporary, NSYNC never recorded music together again. However, they did attend events together. In 2003, they reunited on stage to perform a Bee Gees medley at the Grammy Awards.

Two years later, they released a greatest hits album, which included one previously unreleased song, “I’ll Never Stop.” In the United States, it entered the Billboard 200 at number 47; it also debuted at number 96 in the UK. The group’s third and final release with Jive Records, it has sold more than 600,000 copies worldwide to date.

A second compilation album titled, The Collections, followed in 2010. Unlike their previous album, it only included singles released in the UK.

Fast forward to 2013 and they regrouped once again at the MTV Video Music Awards, where they performed a medley of “Bye Bye Bye” and “Girlfriend”. However, it was confirmed that they did not have any intentions of reuniting for new music.

Amidst the COVID-19 pandemic, the boys also got together over a video call to celebrate Lance Bass’ 41st birthday in what appeared to be a Cinco De Mayo-themed party. Timberlake was the only one missing from the virtual reunion.

And two years before that, Kirkpatrick, Fatone, Bass, and Chases regrouped for a performance with Ariana Grande at Coachella, where they performed “Tearin’ Up My Heart”, “It Makes Me Ill”, and “Break Up With Your Girlfriend.”

What Is Justin Timberlake Up To?

Timberlake released his fourth solo album, Man of the Woods, in 2018. A huge hit, it entered the US Billboard 200 at number one with over 290,000 album-equivalent units. Some highlights include “Say Something (ft. Chris Stapleton)”, “Filthy”, “Man of the Woods”, and “Young Man.” And as of 2021, it has received platinum certification in the U.S. with more than 1 million units sold.

To promote the album, Timberlake also embarked on The Man of the Woods Tour, which began in Toronto on March 13, 2018. It eventually ended in Uncasville on April 13, 2019, after 115 shows, making it one of the biggest tours of 2018.

Outside of his music career, he has also starred in several films. In 2021, he joined the cast of Palmer, which also starred Alisha Wainwright, Juno Temple, Ryder Allen, and June Squibb. And prior to that, he lent his voice to the animated movie, Trolls World Tour, which came out in April 2020.

More recently this May, he was invited onto The Ellen Degeneres Show. And according to IMDb, he will be appearing in a film titled, Reptile, which will revolve around a New England detective and his illusions, later this year.

Where Is JC Chasez Now?

In 2019, Chasez was featured in the documentary film, The Boy Band Con: The Lou Pearlman Story, which centers around Lou Pearlman and his felony convictions, alongside Kirkpatrick and Chasez. Not only that, but it also included interviews with AJ McLean, Nikki Deloach, Ashley Parker Angel.

Prior to that, he had appeared on The Ellen Degeneres Show and Entertainment Tonight in 2018.

Since then, he has generally stayed under the radar. Last May, however, he was spotted on a fast food and candy run with his girlfriend wearing a pink beanie, colorful jacket, and glasses. If anything, he was almost unrecognizable.

What Is Joey Fatone Up To?

Fatone currently hosts Common Knowledge, a game show that airs on the Game Show Network. As of 2023, it’s currently on its third season.  That’s not all, he’s also the host of Impractical Jokers: After Party, a show in which four lifelong friends compete in awkward and outrageous challenges.

And in 2019, he competed in the first season of The Masked Singer, where he performed as “The Rabbit.” He ultimately tied with Rumer Wills for a fourth-place finish. He has also made appearances in Live with Kelly and Ryan, Entertainment Tonight, Celebrity Wheel of Fortune, Family Feud, The Wendy Williams Show, and Home & Family.

Where Is Chris Kirkpatrick in 2023?

Kirkpatrick currently produces music for artists through his company, Working Class Industry. He also performs, hosts, and works with charities across the country on a regular basis.

In terms of media appearances, he recently competed in the third season of Celebrity Big Brother, which premiered on February 2, 2022. He was ultimately voted out during the seventh episode, making him the third HouseGuest to be evicted from the house.

In December 2021, he also appeared in the ABC TV special, A Very Boy Band Holiday, where he performed “Rockin’ Around the Christmas Tree” with his former NSYNC bandmate, Joey Fatone.

What Is Lance Bass Up To?

Last October, Bass and his husband Michael Turchin welcomed a pair of twins named Violet Betty and Alexander James, after many years of surrogacy attempts. The 42-year-old had shared the exciting news along with a picture of their birth certificates on his Instagram page, which quickly racked up tens of thousands of likes.

Prior to that, he was a guest host on the seventh season of Bachelor in Paradise. He was also a panelist on Unicorn Hunters, a reality series where he and other judges determine whether or not it’s worth investing in different start-up companies. The series consisted of six episodes and premiered on Amazon Prime on May 10, 2021.

He also made appearances in The Circle, Insatiable, Single Parents, and My Kitchen Rules and was interviewed in the YouTube Premium documentary film, The Boy Band Con: The Lou Pearlman Story.