Martin Dell’Arciprete introduced SmartPlate in the 721st episode of Shark Tank. SmartPlate was described by Martin as one of the latest thing in nutritional technology. It is specifically designed to help people diet. SmartPlate is an amazing product that can calculate and weight the nutritional value of any kind of food that is put on the SmartPlate.

The amazing features of SmartPlate are possible due to the presence of cameras and scales in each plate. The plate can take a picture of the food and calculate its nutritional value according to what is written on the USDA database. All of the information generated by the SmartPlate can be synced with the smart phone app. Through the app, you can easily track your food intake for the whole day. Moreover, the shape and size of the SmartPlate is one of a kind, the design and size of the portion compartments of the plate can prevent you from overeating. It is also equipped with an indicator that will go off if you will eat too fast. Hence, you will be reminded by SmartPlate whenever you eat too much or too fast.

It was in May 2015 that the SmartPlate has been introduced through a successful kick starter campaign. Through its campaign, SmartPlate has raised $110,000 which was used to start manufacturing. Phones which have Fitbit can also be used to sync their data with SmartPlate for them to have a better view of their food expenditure and calorie intake. 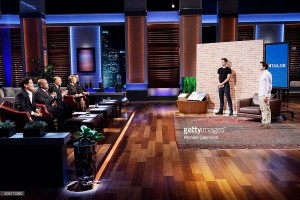 Martin entered with a goal of having $1 million in exchange for 15% of his business. He began his speech by saying that many people do try to become healthy but they have a hard time counting their calorie intake. Through the weight and food sensors of SmartPlate, people will now know the nutritional information of the foods on their plate instantly.

He handed several samples of his SmartPlates to the Sharks. Mr. Wonderful asked Martin how his product can differentiate between oils. Martin’s reply was “It can’t.” However, SmartPlate can indicate the different ingredients the oils contain. Mr. Wonderful added that there are still a lot of things that are needed to be done in order for the SmartPlate to work. He also added that the price of $199 just for an app is crazy. People will not waste their money on an app that is so expensive, Mr. Wonderful got out early. Daymond said that he didn’t like the pitch so he’s out. Kevin stated that not all people eat all the food in their plates so there’s really no merit that can be given to the product which made him decide to be out. Mark wasn’t satisfied with the technology presented and he bet that the SmartPlate is from a third-party design company so he’s out. While Sacca said that the SmartPlate is such a crutch. He also thought that it is the camera that does all the work and there is a very high chance that this business will fail. With four of the Sharks out already, Martin tried to pitch Barbara. However, Barbara said that Martin’s pitch was confusing and terrible so she’s also out.

Even after being rejected by all the Sharks, Martin said that he still believes in the effectiveness of his product.

Not only after the episode aired, the company fired Martin Dell’Arciprete, who had presented the product to the sharks. In need of funds, the SmartPlate’s creators launched an Indiegogo campaign, which successfully raised more than $158,000. With that, they were able to move forward with its production.

Over the next two years, they worked non-stop on both the SmartPlate hardware and app. They also announced in an update that they will be discontinuing the free standalone app as they needed to “focus on [their] device and app together” for the best user experience.

Due to the covid-19 pandemic, however, their production was halted indefinitely at the beginning of 2020. They were, however, able to produce a pilot run of 150 units, which was a success. Their manufacturing operations later resumed in the middle of April. Due to the small number of products, however, they remained in the queue for a while, which ultimately led to another delay.

In the end, the estimated shipping date for North American backers was December 2020 while international customers were told they could expect the product in March 2021. Around that same time, the company announced that they had partnered up with entrepreneur Tony Robbins.

As of 2022, SmartPlate is still up and running and selling the product as a subscription. For $199 + $30/a month, you’ll get two sets of SmartPlate Trays, the SmartPlate Premium App, and the Food Portion Smart Scale, which is capable of scanning more than 1.5 million barcodes. Not only that but it’ll also come with macro + micronutrient trackers, a bonus 30-day Keto Fat Loss Guide, and a 30-day Plant-based Fat Loss Guide.

They’re also still in the process of shipping orders to their US and Canada backers, however, only those who are using iPhones as their camera recognition feature is still being developed for Android devices. They’ve also stated that international orders will ship out around the same time as they still need to meet international app requirements.

Those who’ve already received the product, however, seem happy with how it works. For one thing, the SmartPlate app is highly rated on the iOS app store. It currently has a 4.3-star rating with many calling it a “game changer.” Not only that but many have also praised the company for its great customer service. More than one user even received a call from the CEO himself when they experienced issues with the app.