Revolights is an LED light that attaches to the wheel of a bike for better visibility during the night. It was founded by Kent Frankovich after he experienced the hassle of riding in the dark himself one night on his way back from grad school. Kent’s mission was to lower the bicycle accidents caused at night by making cyclists more visible. With this idea and his team, Kent built a prototype and started his company through a Kickstarter campaign.

With his background, proactivity, and a great product, Kent was able to successfully obtain over $200,000 from Kickstarter in 2011. With this capital, Kent began selling his product primarily online and became very successful in less than a year. Needing capital to lower costs and seeking connections help grow his company, Kent applied to be on Shark Tank and was invited for Season 5.

Kent entered the Tank seeking $150,000 in exchange for 10% of his company. Kent gave a description of common lights seen on a bike in the front and back, but how 90% of night-time bike accidents are caused by inadequate side visibility that these lights lack. Kent presented his solution in Revolights which mount to a bike’s wheel so one can see the light from all angles. Kent presented Revolights through a video of how the product looks when riding at night. Daymond came up to try the product on a bike while Kent gave his story of how he came up with the idea when riding back one night from Stanford University. Impressed, all the Sharks came up to get a closer look at the LED lights while Kent gave more descriptions about the product.

Kevin wondered if the lights could be stolen, but Kent mentioned Revolights are solid rings so when one locks up their bike, they also lock up the rings. After mentioning he had patents, Kevin wondered if Kent was interested in licensing which Kent was considering after proving there was a market. Lori was interested in the numbers and Kent mentioned they grossed $600,000 in the ten months they’ve been in business, all of which was online. The individual sets sell for $139 while the full set sells for $229. Kent mentioned they were not profitable because he was putting the money back in the business. Lori was also wondering if there was any competition, but Kent mentioned there wasn’t anything as visible as Revolights. Daymond was impressed and knew there would be more offers coming, so he started with an offer of $300,000 for 30%. Kent was immediately hesitant about the equity ask, but Daymond told him to take a moment and consider it. Kevin also made an offer $150,000 for a 7% royalty which would drop to 1% when his money is paid back. Kent, however, immediately declined Kevin’s offer because he wanted an equity investment. 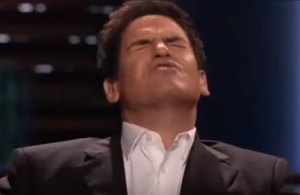 Robert was very astonished with Kent’s background and product so he offered him $300,000 for 10%, double the valuation he came in asking for! Daymond and Lori were astonished by the offer and Daymond knew he couldn’t get into a bidding war and went out. Kent thanked Robert for his offer, but wanted to hear other offers. Mark jumped in and agreed with Robert that Kent’s valuation was too low. Mark thought the valuation made no sense because of Kent’s background and sales. He then accused Kent of “screwing with the Sharks” as he felt Kent was insulting them with a deal that would never close. Kent immediately defended his valuation, stating that he valued the Sharks connections, but Mark interrupted by replying “you’re so full of crap!” Mark wondered why Kent didn’t put up even a small smile when Robert offered him a valuation double of what he asked and went out.

Kent mentioned capital being an issue for his company because no one has taken a salary and he saw Shark Tank as an opportunity to partner with someone to grow his company with their connections, not to come in and get publicity. Mark, however, felt that Kent should have immediately accepted Robert’s offer with that logic. Robert tried to defend Kent by saying he wasn’t getting the vibe as Kent being someone who wouldn’t close a deal. Mark and Daymond, however, wondered why Robert was letting Kent hear other offers after his generous offer. Kent, after hearing all the concerns and insults, decided to take Robert’s offer. As Kent left, Kevin confirmed that Mark accused Kent of only coming on for exposure which Mark agreed to. Robert, however, said he has faith in the people who come on the show.

Revolights Now in 2023 – The After Shark Tank Update

Shortly after the episode aired, the company received an additional $1 million from Sierra Angels and other angel investors. This allowed them to ramp up production and before long, their products were available in a number of sporting goods supply stores including REI. They were also sold on Amazon.

Over the next few years, the company grew significantly. By 2016, they had released two new products- the Revolights Eclipse and Revolights Coolidge, the former of which was brought to life with the help of backers on Indiegogo.  Not only that, but the company also expanded to other parts of the world including Singapore, South Africa, and Brazil.

Unfortunately, however, it didn’t last. In January 2019, they informed their customers and backers that they would be closing. In the email, they thanked everyone for their support and cited “both personal and professional” reasons for their closure. They also stated that they will not be able to continue providing product support, which seemed to frustrate many customers.

Their website went dark, their social media pages were abandoned, and their products were pulled from all retailers, including Amazon, where their lights had a 3-star rating. While some customers were impressed with their visibility, others felt that the installation process was too time-consuming. There were also complaints about the lights not being bright enough.

Some, however, saw it coming. On Reddit, one user said that they had emailed support in June 2018 and that they were told the Eclipse+ would be restocking in August. However, that never happened, which led them to follow up again in October. They were subsequently told that the lights were on backorder for seven months. In the end, they were never restocked as the company shut down just a few months later.

Since then, many customers have run into issues with the batteries. To their dismay, however, there’s no way to replace or fix them as the company is no longer operating.

As of 2023, nothing has changed. Their website is still down and there’s no sign of any comeback. Fortunately, there are alternatives for those who are seeking a lighting system for their bikes, one example being Monkeylectric.

As for Kent, he seems to have moved on from the business. According to his LinkedIn profile, he began working at Apple shortly after shutting down the company. More specifically, he was a Mechanical Design Engineer from February 2019 to October 2019, and since October 2019, he has been working as an Engineering Manager.