Every year, hot, handsome, sexy, newly-discovered Hollywood actors are detected by our “hot men radar” and instantly added to our “potential hottest Hollywood actors” list. Now, we slim down our list and come up with the top 10, which is a rather hard task especially because all these men are equally compelling and attractive, it’s very hard for us to rank them. But thanks to our patience, we did it anyway, after hours of thorough evaluation.

Joe Manganiello is perhaps best known for playing Alcide Herveaux in the HBO series True Blood. His portrayal of the werewolf earned him several awards including two Scream Awards, a Saturn Award, and a NewNowNext Award. Some of his other television credits include How I Met Your Mother, American Heiress, One Tree Hill, Big City Greens, and Star Wars Resistance.

In 2016, he was cast as Deathstroke/Slade Wilson in the DC Extended Universe. He later made his debut in the superhero film, Justice League, which was released on November 17, 2017.

Raised in Pennsylvania, he auditioned for the Carnegie Mellon School of Drama as a teen during his senior year. It wasn’t until he reapplied the next year, however, that he was accepted into the acting program. He later graduated with a BFA in acting in 2000. He eventually made his film debut in the superhero film, Spiderman. 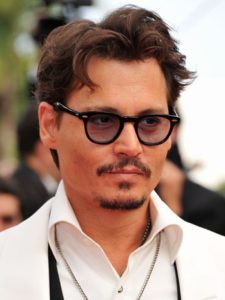 Johnny Depp rose to fame with the popular television series, 21 Jump Street in the late 80s. He then appeared in a number of indie films including Dead Man, Fear and Loathing in Las Vegas, Benny and Joon, and What’s Eating Gilbert Grape.

In 2003, he was cast as Captain Jack Sparrow in the Walt Disney film, Pirates of the Caribbean, which propelled him further into stardom. He also starred as Willy Wonka in Tim Burton’s Charlie and the Chocolate Factory in 2005. Some of his other film credits include Finding Neverland, Public Enemies, Chocolat, Sleepy Hollow, Fantastic Beasts: The Crimes of Grindelwald, Fantastic Beats and Where to Find Them, The Professor, Murder on the Orient Express, Black Mass, and Into the Woods.

He will also be directing an upcoming film titled, Modigliani, which will center around Amedeo Modigliani, in 2023.

Recently, he made the headlines after filing a defamation suit against his ex-wife and fellow actor, Amber Heard. After a six-week trial, the jury ruled in favor of Depp—that Heard’s allegations of “domestic abuse” and “sexual violence” was false and awarded him $15 million USD. 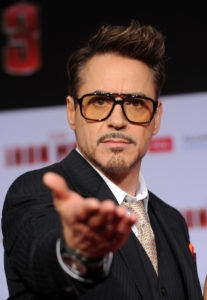 Robert Downey Jr. is one of Hollywood’s highest-paid actors. In 1992, he played the title character in the biopic Chaplin, for which he received an Academy Award nomination. He then went on to appear in the films The Singing Detective, U.S. Marshals, Black and White, The Outsider, Charlie: The Life and Art of Charles Chaplin, Kiss Kiss Bang Bang, Tropic Thunder, and Zodiac.

It wasn’t until the late 2000s, however, that he gained global recognition for his portrayal of Tony Stark in the Marvel Cinematic Universe Films. He most recently starred in the 2019 film, Avengers: Endgame, which earned him an MTV Movie Award, Saturn Award, and Teen Choice Award.

Not only that but he’s also known for playing the title character in the mystery film, Sherlock Holes as well as its sequel, Sherlock Holmes: A Game of Shadows. As a matter of fact, the former earned him his second Golden Globe Award.

In addition to acting, he also works as a producer. Just last year, he worked on the fantasy drama, Sweet Tooth, starring Nonso Anozie, Adeel Akhtar, Christian Convert, Dania Ramirez, and Stefania LaVie Owen. Prior to that, he worked on the period drama, Perry Mason, which premiered on HBO on June 21, 2020. 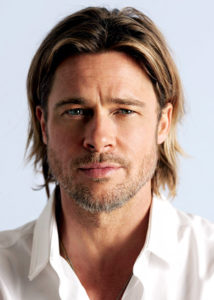 Brad Pitt has been called the world’s most attractive man by numerous media outlets. An accomplished actor, he has won numerous accolades including two Golden Globe Awards,

a Primetime Emmy Award, an Academy Award, a British Academy Film Award, among many others.

He first rose to fame after appearing in the 1991 film, Thelma & Louise. He then starred in the sci-fi film, 12 Monkeys, which earned him his first Golden Globe Award for Best Supporting Actor.

Since then, he has starred in numerous blockbusters including Ocean’s Eleven (and its sequels), Troy, World War Z, Mr. & Mrs. Smith, Once Upon a Time In Hollywood, Ad Astra, The Assassination of Jesse James by the Coward Robert Ford, and The Curious Case of Benjamin Button. He also starred in the action comedy, Bullet Train, which came out earlier this year.

Outside of acting, he also owns a production company called Plan B Entertainment with Jennifer Aniston and Brad Grey. Over the years, they’ve worked on many titles including 12 Years a Slave, The Departed, The Tree of Love, Moneyball, and Moonlight.

Not only that, but he and his ex-wife also established the Jolie-Pitt Foundation, which aids humanitarian causes worldwide.

Chris Hemsworth initially rose to prominence playing Kim Hyde in the Australian soap opera, Home and Away in the mid-2000s. He was then cast as Thor in the Marvel Cinematic Universe films. He first played the character in the 2011 film, Thor. Since then, he has reprised the role in The Avengers, Thor: The Dark World, Doctor Strange, Team Thor, Avengers: Endgame, and more recently, Thor: Love and Thunder.

He has also starred in the films Blackhat, In the Heart of the Sea, The Huntsman: Winter’s War, Bad Times at the El Royale, Men in Black: International, Interceptor, Vacation, Rush, Extraction, and Spiderhead. He also joined the cast of the horror comedy, The Cabin in the Wood in 2011, which grossed more than $66 million worldwide.

As of right now, he’s working on two upcoming films—Extraction 2 and Furiosa, the latter of which is currently filming in Australia. 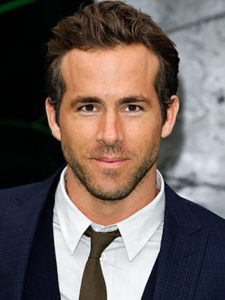 Ryan Reynolds is perhaps best known for playing Deadpool in the X-Men film series. Not only did it earn him a Golden Globe Award nomination, but it also earned him a Critics’ Choice Movie Award for Best Actor in a Comedy. He was also given a star on the Hollywood Walk of Fame in 2017 for his achievements in the entertainment industry

One of the highest-earning actors of all time, his films have grossed more than $5 billion worldwide.

Some highlights include The Proposal, Definitely, Maybe, Just Friends, Buried, The Croods, Woman in Gold, and Mississippi Grind. In 2019, he also lent his voice to the title character in Detective Pikachu.

On the small screen, he has also appeared in Family Guy, Sesame Street, Two Guys and a Girl, Scrubs, Zeroman, School of Life, and Don’t. More recently, he starred in the documentary series, Welcome to Wrexham, alongside Wayne Jones and Rob McElhenney. He also appeared as a guest on Jimmy Kimmel Live!, Entertainment Tonight and My Next Guest Needs No Introduction with David Letterman.

In 2018, he also started a production company called Maximum Effort. Since then, he has also purchased an ownership stake in Aviation American Gin and Mint Mobile. 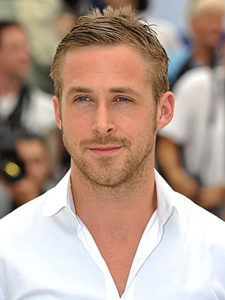 Ryan Gosling rose to fame as a child star on Disney’s The Mickey Mouse Club during the early to mid-90s. He then went on to appear in the shows Goosebumps, Are You Afraid of the Dark?, The Adventures of Shirley Holmes, Ready or Not, and Breaker High before making his film debut in The Believer.

In 2004, he gained further stardom for the romance film, The Notebook. A string of critically acclaimed drama films soon followed including Lars and the Real Girl, Blue Valentine, and Half Nelson, the latter of which earned him an Academy Award nomination for Best Actor.

Since then, he has also starred in The Big Short, La La Land, First Man, Blade Runner 2049. In 2014, he also made his directorial debut in the fantasy thriller, Lost River. And more recently in 2022, he starred in the action thriller film, The Gray Man alongside Chris Evans, Jessica Henwick, Ana de Armas, and Wagner Moura.

Outside of acting, he’s also an accomplished musician. In 2008, he and his band, Dead Man’s Bones released their eponymous debut album and toured across North America. Not only that, but he also co-owns a Moroccan restaurant in Beverly Hills, California.

Zac Efron rose to fame during the 2000s for his starring role in the High School Musical series. Some of his most noteworthy songs from the show include “Breaking Free (with Vanessa Hudgens and Drew Seeley)”, “You Are the Music In Me (With Vanessa Hudgens)”, “Rewrite the Stars (With Zendaya)” and “Bet On It.”

He also had a lead role in the films 17 Again and Hairspray, the latter of which earned him several accolades including a Critics’ Choice Movie Award and MTV Movie Award.

From there, he starred in the films New Year’s Eve, Neighbors, Dirty Grandpa, We Are Your Friends, That Awkward Moment, The Disaster Artist, The Paper Boy, The Greatest Showman, and The Lucky One. He also played serial killer Ted Bunny in the 2019 biographical film, Extremely Wicked, Shockingly Evil and While.

More recently in 2021, he starred in the Netflix web documentary series, Down to Earth with Zac Elton, for which he received a Daytime Emmy Award. Premiered on July 10, 2020, it follows Efron as he travels around the world to London, France, Iceland, Sardinia, Costa Rica, Puerto Rico, and Peru. He also starred in the films Gold and Firestarter, both of which came out earlier this year.

George Clooney was propelled to stardom after starring in the NBC medical drama, ER. For his portrayal of Dr. Doug Ross, he won numerous accolades including two Primetime Award Nominations. He also starred in a number of films throughout the 90s including From Dusk Till Dawn, Out of Sight, Batman & Robin, O’Brother, Where Art Thou and Three Kings.

In 2001, he gained further recognition after starring in the comedy film, Ocean’s Eleven. He also made his directorial debut in the 2002 spy drama, Confessions of a Dangerous Mind. Since then, he has also directed the films The Idles of March, Leatherheads, Good Night, and Good Luck, and The Monuments Men.

More recently, he worked on the coming-of-age film, The Tender Bar, which was released on Prime Video on July 7, 2022. He will also be starring alongside Julia Roberts in the upcoming romantic comedy, Ticket to Paradise, which will be released later this fall.

As of 2022, he is one of only three people to have received Academy Award nominations in six different categories. He has also been named one of the most influential people in the world by Time Magazine. 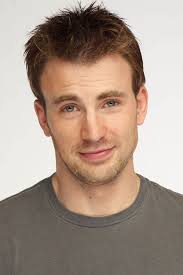 Chris Evans gained attention after playing Human Torch in the Marvel films Fantastic Four and Fantastic Four: Rise of the Silver Surfer. He also starred in the film adaptations of TMNT, Scott, Snowpiercer, and Scott Pilgrim vs. the World.

Aside from that, he also starred in the 2019 mystery film Knives Out and in the television series Gifted and Defending Jacob. In 2018, he also made his Broadway debut in a production of Lobby Hero, for which he was nominated for a Drama League Award.

In terms of upcoming projects, he will be starring in a romantic action film titled, Ghosted alongside Adrien Brody, Ana de Armas, Mike Moh, and Amy Sedaris, which is set to be released sometime next year on Apple TV+.