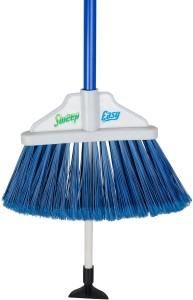 Shane Panell is a stay at home dad who knows just how difficult it can be to chase around three little ones all day. As rewarding as it is to have children, being a parent requires a lot of time and energy, especially when the little ones are feeling particularly rambunctious. Shane knows all too well that cleaning up sticky, crusty messes left behind after messy play time can be a real hassle. No one wants to get on their hands and knees to scrub the kitchen floor, which is why he decided it was time to come up with a solution to the problem.

Shane turned his garage into a workshop and there he began to work on creating a prototype for the Sweep Easy. Once he was satisfied with the design, he went around to various public places to see if any business owners would bite. He took Sweep Easy to movie theaters, super markets, and even schools. A good portion of them said that they would definitely be interested in purchasing a few of them, but he has yet to receive any orders. However, Shane didn’t let this dishearten him because he knew that parents everywhere could appreciate the Sweep Easy. All he needed was someone with a little more experience in the business realm to help him get his foot in the door, and what better place to do that than the Shark Tank? However, will any of the Sharks be interested in investing into a company that has yet to make any sales?

Shane enters the Shark Tank seeking a $40k investment for a 25% stake in his Sweep Easy business. He then moves on to explain that, even though your typical broom has been a trusted cleaning appliance for decades, it is only good for merely sweeping things about the floor. The question that Shane poses is; what about the sticky messes that get stuck to your floors? No one ever enjoys getting on their hands and knees to scrub a messy floor, and that is why he reinvented the household broom. By pressing the top handle of the Sweep Easy broom, a scraper emerges from the broom and allows you to scrub off the dried mess on the floor without bending over. Then, once the mess has been scraped up, you just retract the scraper and sweep up the rest of the mess.

What makes matters even better for the Sharks is that Shane currently has a patent pending status for this new broom design. However, there is a also a downside. He has yet to make any sales, but that is only because he doesn’t have an official product yet. All he has currently are prototypes that he has made himself. In spite of that though, Shane believes wholeheartedly that this product will be a success on the market because he knows exactly what it’s like to have your hands full when you’re a stay at home parent. He has 3 children of his own and it’s definitely a bit of a challenge when it comes to keeping up with the kids while also being in charge of household tasks. He wanted to create something that would make the lives of parents just a little bit easier.

Robert Herjavec asks to come up and try the Sweep Easy for himself, being that he was a stay at home dad 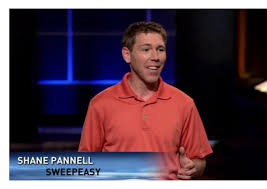 for 3 years and is able to relate to these floor cleaning struggles. While Herjavec tests out the prototype, Kevin O’Leary asks whether or not Sweep Easy has been presented to any manufacturing companies. Shane responds by saying that he has, but the only reason they haven’t placed any orders yet is because he isn’t licenses, bonded, or insured yet. He is the only person running the show right now, which is making the business start up a little difficult. That is the main reason why he was standing before them, because he desperately needs their business expertise.

Herjavec and Kevin Harrington take a moment to argue about what the best course of action would be for Sweep Easy. Herjavec believes that it would be easier to just license the patent to other broom manufacturing companies and collect a royalty, but Harrington argues that more money could be made if the product can be sold directly to the consumer. O’Leary then jumps into the conversation, saying that he has an offer to make, but he doesn’t want to waste time building a broom company when they could license it and sit back, collecting a check while some other company does the leg work. With that being said, O’Leary offers Panell $40k in exchange for 20% of the business. Panell appears to be extremely pleased with this offer, but Harrington chimes back in to offer him a different perspective.

Harrington knows that it’s difficult to get a new product on the market, but he has connections in television advertising and knows that the Sweep Easy can make a lot more money if it is sold directly to the consumers in addition to being licensed. He doesn’t have enough time to put an offer on the table though, because O’Leary cuts him off to offer a new deal of $50k for 20%, only if Shane stops listening to the other offers that the Sharks might have to make. Harrington disregards this and argues that they can make so much more money if they have a commercial in the United States, and then license that later to other countries to make money off of that.

The next to speak up is Daymond John, who decides to point out that the issue in the bickering that the other two Sharks are having is that Shane wants to build and run his own business. The goal is to start earning off of the Sweep Easy broom, but then to later create other products and acquire new patents. And John argues that he knows exactly where Shane is coming from because he too started his own brand right out of his home basement. He wants to turn Shane’s home appliance brand into an empire in the same way that he did with his clothing brand. With that being said, he decides to offer $75k in exchange for 33%, but he’s willing to create an entire company while the other two Sharks just want to do licensing deals.

Despite the majority of the Sharks going crazy over this product, Barbara Corcoran decides that she isn’t going to invest because Shane doesn’t strike her has the kind of guy who is willing to go all out for his business. Shortly after she says that, Harrington makes an offer of $40k for 25% and argues that this is undoubtedly the best deal because they will end up making millions over time. 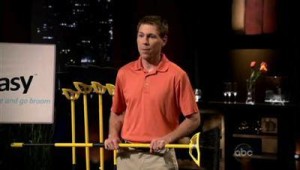 In an attempt to smooth things over with Harrington, O’Leary offers to make a partnership with him, but Harrington declines because they don’t have the same vision for Sweep Easy. Herjavec is interested in going in on O’Leary’s deal though, because he too believes that the only hope of success that Sweep Easy has is if they licenses it to other companies. Together they end up making an offer of $80k for 25%. After that though, John and Harrington go in together to make the same offer, but they want to create infomercials for Sweep Easy and to get it sold in stores as its own company.

Shane clearly has a lot to think about, so he decides to call his wife, but all the Sharks attack him at once. O’Leary insists on talking to his wife because “talk is cheap”, but John wants him to make a decision right now. He even threatens to reduce the deal down to $70k if he walks out of the room. Herjavec tells Shane to “be a man”, which clearly insults him a little. All of the pressure seems to be getting him an Panell hastily decides that he will accept the deal between Harrington and John if it goes back up to the $80k. Without any hesitation, John agrees to revert back to the original deal.

The deal with Kevin never went through. Their appearance on the show did, however, boost their popularity and for a period, their sales went up. Not only was it available on their website, but they also sold it on Amazon.

However, that didn’t last long. Within a few months, things became quiet. Their social media accounts appeared to be abandoned and negative reviews began to appear on Amazon. For example, many were dissatisfied with the quality of the product. In fact, many claimed that the broom had actually fallen apart after just a few months of use. That’s not all, its performance was also mediocre. If anything, it didn’t work any better than a regular broom.

Seeing as how they stopped updating their site (and social media accounts), many believed that the company was gone for good. In 2017, however, they surprised everyone by coming back with a new version of the broom. Unlike the original SweepEasy, it came with a new design that prevented you from having to get down on your hands and knees when cleaning. Not only that, but it also came with a built-in retractable scraper that you can use with the press of a button.

They also released three additional models- the Home, Lobby, and Pro, all of which featured interchangeable scrapers as well as a new and improved button release system. And for a while, things seemed to be going well. The business was pulling in $1 million in sales each year and people seemed happy with the new and improved product.

But that didn’t last long either. As of 2023, the company is no longer in business. Their website has been shut down and their social media accounts have also been deleted. If anything, there’s no trace of the product left anywhere on the internet- it’s almost as if they vanished overnight.

What’s Shane Pannell up to now? Interestingly enough, his LinkedIn profile still says that he’s the president of SweepEasy, LLC. Perhaps he just never updated his account? One thing’s for sure, though, as a stay-at-home dad (assuming that he still is one), he’s probably busy taking care of his children.

Will he be coming out with any new products in the future? Who knows. We may very well come up with a new product in his garage workshop. Having said that, we probably won’t be seeing him again on Shark Tank anytime soon.