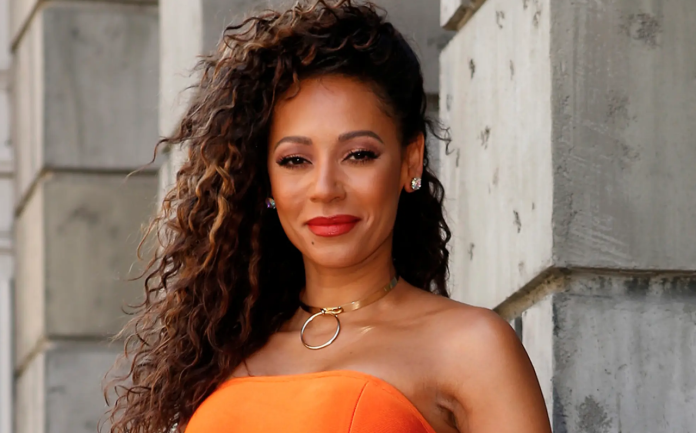 Mel B is best known as “Scary Spice” from the popular 90s girl group, the Spice Girls. Where is she now in 2022?

Early Life and Rise to Stardom

Melanie Brown, aka “Mel B”, was born on May 29, 1975, in West Yorkshire, England. She is of Nevisian descent on her father’s side and Welsh and English descent on her mother’s side. Growing up, she lived in the Kirkstall area and attended Intake High School, where she studied performing arts. After graduating, she worked as a dancer in Blackpool, Lancashire.

In 1994, she responded to an ad in The Star magazine, which said they were looking for female performers for an all-girls pop act. She was ultimately chosen after singing “Greatest Love of All” at the audition, along with Emma Bunton, Victoria Beckham, Melanie Chisholm, and Geri Halliwell.

The group – later known as the Spice Girls – signed with Virgin Records the following year and released their debut single, “Wannabe” on June 26, 1996. Despite the fact that it was recorded very quickly, which the group wasn’t happy about, it became a major hit, topping the music chart in numerous countries including the UK, US, Denmark, Europe, Australia, Ireland, Italy, and many others. By the end of the year, they had become a global phenomenon, with millions of copies sold worldwide.

Their debut album, Spice, also proved to be a huge commercial success. Not only did it top the music charts in more than 17 countries, but it also received multi-platinum certification in 27 countries. By the end of 1997, it had become the world’s best-selling album of the year, having sold 19 million copies. In total, four singles were released from the hit album – “2 Become 1”, “Say You’ll Be There”, “Wannabe”, and “Mama/Who Do you Think You Are.”

Their subsequent album, Spiceworld, was also met with positive reviews. It debuted at number one on the UK Albums chart and reached the top in several European countries including the Netherlands, Austria, Ireland, Norway, and Denmark. It also performed well in the United States, where it entered the chart at number eight on the Billboard 200.

To promote the album, they embarked on their first concert tour, The Spiceworld Tour, which kicked off in Dublin, Ireland, and ended at London’s Wembley Stadium after 97 shows across Europe and North America. To date, it’s the highest-grossing tour by an all-girls group.

They were also given a film, Spiceworld: The Movie, which despite mediocre reviews, was a commercial success, having grossed $100 million worldwide. A musical comedy, it centered around the girls as they performed in London. Directed by Bob Spiers, it was released in late 1997 in the UK and on January 23, 1998, in North America.

Several additional songs followed including “Stop” and “Goodbye”, the latter of which was a tribute to Halliwell, who had left during their Spiceworld tour.

By the late 90s, the girls had begun to drift apart to pursue other projects and Mel B was no exception. After recording a couple of singles, she released her debut album, Hot, on October 9, 2000. The standard edition consisted of 11 tracks including “Feels So Good”, “I Want You Back (ft. Missy Elliott)”, “Pack Your Shit (ft. Eric Williams), ”Hell No”, and “Step Inside.”

In the United Kingdom, it peaked at number 28 and sold more than 60,000 copies, earning it a silver certification. It also charted in Japan, Germany, and Scotland. By 2001, it had spawned four singles including “Feels So Good”, which helped the album re-enter the music chart in the UK.

She eventually left Virgin Records in 2001 and for several years, she focused her attention on acting. It wasn’t until four years later that she came back to the music scene with a second studio album, L.A. State of Mind. Unlike her previous album, it was released through her own label, Amber Cafe, and featured acoustic music instead of hip-hop sounds. Some of its tracks included ‘Stay in Bed Days”, “Say Say Say”, “Hold On”, “Music of the Night (Period)”, and “Beautiful Girl”, all of which were co-written by Mel B.

Mel B also embarked on a two-week tour to promote the album. Despite that, it was a commercial failure, with less than 1,500 copies sold worldwide.

As it is, her acting career was a lot more successful. In 2003, she landed her first movie role in the dark comedy, Burn It, which also starred Chris Coghill, William Ash, Kieran O’Brien, and Lisa Faulkner. A string of roles soon followed, which saw her in LD 50 Lethal Dose, The Vagina Monologues, and The Seat Filler. And in 2004, she was invited to join the musical Rent in the Netherlands, where she played the role of Mimi Marquez.

After starring in the musical, she landed a leading role in Telling Lies, a thriller film. She also appeared as herself in the documentary, Giving You Everything.

Putting acting aside, she later joined the fifth season of Dancing with the Stars with Maksim Chmerkovskiy as her partner. The two ultimately ended in second place, after losing to Julianne Hough and Helio Castroneves.

That same year, she reunited with the rest of the Spice Girls for a reunion tour, which included 47 shows across North America and Europe. It was the group’s first time performing together since their 1999 tour – Christmas in Spiceworld. And like their previous tours, demand was incredibly high – so high that many dates sold out within one minute.

Following the tour, Mel B returned to television. She appeared in Loose Women, Living on the Breadline, and was a presenter on the competition series, Dance Your Ass Off. She was also given her own reality show, Mel B: It’s a Scary World, which premiered on September 5, 2010, on the Style Network. Co-created by the singer herself, it followed her and her blended family as they deal with her daily life as a wife, mother, entertainer, and businesswoman. 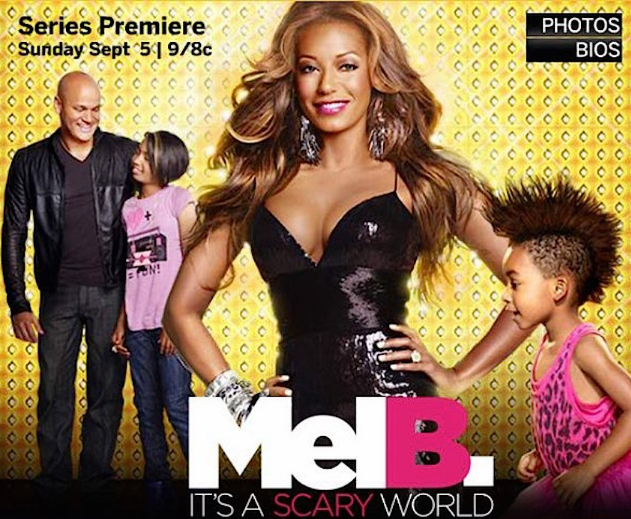 She was also a guest on the second season of The X Factor Australia; she later joined the judging panel in season three and stayed until season four before leaving and returning in 2016. She also appeared as a judge on Britain’s Next Top Model, America’s Got Talent, The Voice Kids: Australia, RuPaul’s Drag Race, and Stepping Out.

She appeared in a couple of films during that period as well, though they’re fairly minor compared to her accomplishments in reality television.

In the summer of 2012, Mel B reunited with the Spice Girls for a special performance at the Summer Olympics Closing Ceremony, which took place in London. Allegedly, they were reluctant to appear but had relented after talking with their former manager Simon Fuller. They ended up performing a medley of their 90s hits “Spice Up Your Life” and “Wannabe”, which became the most tweeted event of the entire Olympic games.

During the performance, the girls entered the stadium in black cabs, each of which was decorated with their individual trademark emblems. They later merged from the cabs and performed the songs from the roofs of the cars, which proceeded to race around the stadium.

Several years later, they reunited once again for the Spice World – 2019 Tour. Mel B and the rest of the girls were reportedly paid £12 million for the tour (Beckham had chosen not to participate), which began on May 24, 2019, in Dublin, Ireland. Across all the shows, there were nearly 700,000 fans in attendance. By the end of the 13-sold-out dates, the tour had earned more than $78 million in ticket sales.

Their three-night sellout stand in London, England, also earned them the Billboard Live Music Award for Top Boxscore in 2019.

From 2019 to 2020, Mel B was a team captain on the comedy panel game, Celebrity Juice. She also appeared as a celebrity expert on the Spice Girls in Michael McIntyre’s The Wheel.

More recently, she appeared on the second season of The Masked Singer UK, a reality singing competition in which celebrities perform while wearing elaborate head-to-toe costumes to conceal their identities from the audience, panelists, and other contestants.

Disguised as a Seahorse, Mel B went on to finish in 11th place. She also appeared in the Spanish version of the show, Mask Singer: Adivina quién canta, where performed as the jellyfish. She was eventually voted out during the fifth episode.

Around that same time, she was a guest on Name That Tune, where she guessed songs played by a live band.

And earlier this year, she reunited with Emma Bunton aka “Baby Spice” in the reality competition series, The Circle. Unlike the other contestants, however, they did not compete. Rather, they only joined the show to increase the prize fund.

It has also been announced that she will be joining the judging panel in the fourth season of The Masked Singer Australia, which will be premiering later this year. That’s not all, she’ll also be replacing Leona Lewis as a judge on Queen of the Universe, a reality series in which a group of contestants competes for $250,000.

Aside from her gigs on reality TV, she also made an appearance in the short film, Love Should Not Hurt in 2021, which was produced in support of Women’s Aid. She was later appointed Member of the Order of the British Empire for her services to vulnerable women and charitable causes. Not only that but she was also appointed as a tourism ambassador from the UK to Nevis.

She also released a memoir titled, “Brutally Honest: A Sunday Times Bestseller” in 2018, in which she talks about the pain and struggles that lay behind glamor and success.

For those who want to know what Mel B’s up to, you can follow her on social media. She has an Instagram page (@officialmelb) that’s updated regularly as well as an active Twitter account (@officialmelb).