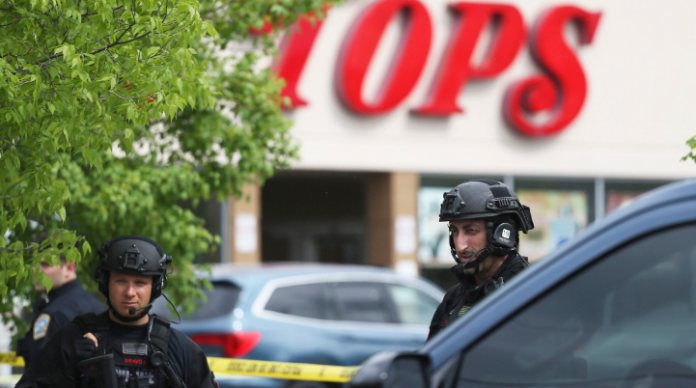 Ten people were killed in a mass shooting that took place at a supermarket in Buffalo, New York. According to officials, the gunman—an 18-year-old teenager—fired a barrage of 50 shots both inside and outside the market. The shooting was also live-streamed on Twitch (the live-streaming platform has since deleted the videos of the incident) and the names of previous mass shooters could be seen on the gun that he used to carry out the attack.

The gunman, who wore body armor and a tactical helmet, shot four people in the parking lot of the supermarket at around 2:30 pm, three of whom suffered fatal injuries. He then entered the store, where he was confronted by a retired police officer working security.

The guard managed to land a shot on the suspect but because of his body armor, it had no effect. The gunman proceeded to shoot nine more people inside the supermarket.

According to Joseph Gramaglia, the Buffalo Police Commissioner, police officers had arrived at the scene one minute after receiving the first report of the shooting. Upon their arrival, the assailant placed the barrel of his gun up to his chin and threatened to shoot himself. Fortunately, officers were able to de-escalate the situation; the suspect subsequently lowered his weapon. He then dropped to his knees and took off his tactical gear, after which he was immediately taken into custody. According to the country sheriff, he is currently being held in isolation under suicide watch.

All 10 victims who were shot and killed were black—six were female and four were male, four of whom were store employees. The former police officer who worked security was also among those killed. Mayor Bryon Brown later identified him as Aaron Salter Jr. “He went down fighting […] he’s a true hero.” said Gramaglia.

The three survivors were brought to a local hospital where they are being treated for non-life-threatening gunshot wounds.

Flags were lowered to half-staff at police stations, fire stations, and other facilities following the incident. According to law enforcement officials, the gunman had carried out the attack by himself; there are no other suspects outstanding.

He was later identified as Payton Gendron, a native of Conklin, New York. He had allegedly traveled several hours to the Buffalo supermarket. While the attack took place on Saturday, investigators believe that he had arrived on Friday—possibly to scope out the area. He was charged on one count of first-degree murder and is being held without bail. Authorities are also investigating terrorism charges.

The rifle that he used to carry out the attack was legally purchased from a dealer in Endicott, New York—and at least one of them was a gift from his father. Robert Donald, the owner of Vintage Firearms in Endicott later confirmed that Gendron had purchased the weapon from his store a couple of months ago.

Racial slurs as well as the names of previous mass shooters had been etched on the guns. Two additional weapons, a shotgun, and pistol were found inside his vehicle. The assailant had also made purchases from gun stores in Pennsylvania.