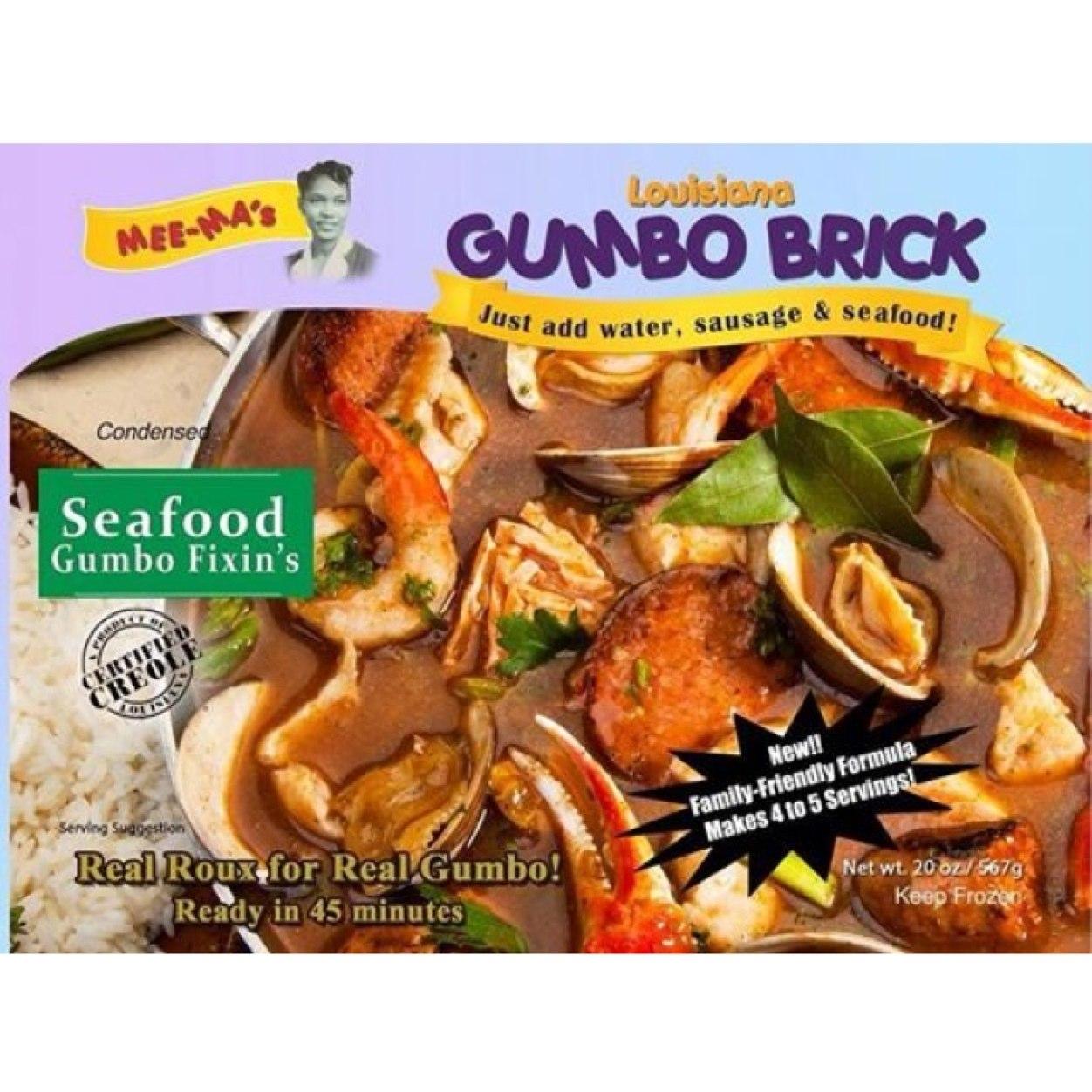 As Carol told the Sharks, Mee-ma’s Louisiana Gumbo Brick was started when she was trying to make a bunch of Gumbo at the requests of friends and family. Before going on Shark Tank, Carol made street food gumbo, to the delight of everyone she sold to. Would the Sharks be so enthralled? 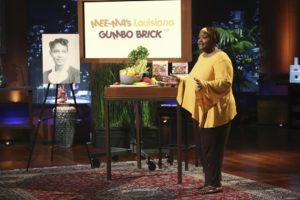 The segment for Mee-ma’s Louisiana Gumbo Brick started with their audition tape. Carol Foster introduced herself, and her 12-year-old daughter. The tape showed them in a small one bedroom apartment with very little furniture. She said that she got her gumbo recipe from her grandmother. She and her family started off selling street food and realized that it might have a wider appeal. Carol told the audience that she had sacrificed a lot for the company, and the tape showed her sleeping on the couch while her daughter slept on the floor. She went on to say that she’d gotten in treats from a major grocery chain, but did not have the money to fill orders.

It cut back to the tank. Carol walked onstage and introduced herself and her business. She told the Shark’s that she was seeking $200,000 in exchange for 20% of the company. She said that good gumbo takes long to make, and is hard to find in stores or restaurants. She said that she has been a long-haul truck driver, and has tasted gumbo from all around the country. She stated that she had requests from friend to make gumbo for the holidays, but each one wanted it prepared in a different way. Carol said that she did not have the time to do that because each batch takes hours to cook. She instead made a spicy gumbo based that they could add ingredients to personalize it to their tastes.

Her display showed several varieties of gumbo base, ranging from chicken to seafood, to pork. She said that she would like to have the Sharks try samples of the chicken and seafood gumbo she had prepared, and Daymond looked excited. Robert took the first one and told her that he loves gumbo. Each Shark took a bowl from the tray as Robert chewed his. He said that he tasted jalapeños. Lori and Daymond both complimented her on the gumbo. She asked who was ready to be a gumbo geek like her.

Kevin asked her if the okra in the gumbo had been frozen, and she confirmed that it was. Kevin said that it was excellent. Carol stated that he was the okra in her gumbo – slimy, but it adds character, body, and richness to the soup. Kevin did not take this as an insult. He said it described him perfectly and said that was why he loves okra. Robert asked her who was in the black and white photo displayed prominently on the stage. Carol explained that the woman was her grandmother who had inspired the recipe and taught her how to cook.

Kevin asked if he can just serve Mee-ma’s Louisiana Gumbo Brick as is, or if he needs to add more to it. Carol said that the brick was just the base, and it was meant to be used that was so that you can customize it as you see fit. Lori asked to see the package, as Robert asked what to do with the brick of gumbo base. Carol carried over the packet to Lori as she explained that the customer would add 8 cups of water per block, as well as up to 5 pounds of the meat of your choosing. Robert then asked how long it would take to cook, and Carol told him 45 minutes or less. He asked if she had any sales to date. Carol said that she had been selling the bricks at church events. More impressively, it was also for sale at local Costco’s in her area. She told the Sharks that she had a half million dollars in sales in the last two years, and Lori looked impressed.

Carol said that she sets up in one Costco a week, and does taste tests. She stated that most of the money she’s generated in the last 2.5 years has gone to. Robert stated that he thought she was doing great, and asked her why she was looking for money. Carol answered that she needs the funds to purchase inventory so that she can get it into more stores. She said that she has a buy-doc from Costco for 15 pallets of product. Kevin asked her if it would have to be frozen, and Carol confirmed that it was frozen. Carol said that Mee-ma’s Lousiana Gumbo Brick was accepted as a permanent item earlier in the year, but she could not keep up with inventory. Kevin told her that she had an excellent problem, and congratulated her.

Lori asked if it was for Costco’s nationwide, but Carol told her that it was just regional. Mark requested to see the purchase order. Lori asked her if she thought she would be able to get the gumbo brick into Costco’s nationwide since it was so popular as in the regional area. Carol said yes. She stated that Costco has 600 stores in the nation, and even if she were only able to get into a third, the numbers would be impressive.

Mark asked what the number were – he wants to know what her costs were, as well as what she was selling the brick for. She said that it cost $4.00 per unit to make, and she wholesales it for $9.99 per unit. Kevin asked if she could get her costs down, and Carol said that she could if she could make larger quantities. Robert stated that she was doing great at Costco, but wondered if she had made it into any other retailers. She said she had not, because she wanted to target box clubs such as Costco and Sam’s Club. She likes the way they display Mee-ma’s Louisiana Gumbo Brick, in a coffin freezer next to expensive lobster tails and scallops.

Mark said that it was a platform for all the ingredients, which he said was smart. Kevin said that it an interesting thing, and asked if she had a commercial kitchen. She confirmed that she did. Mark stated that he liked what she was doing, but she needs to be ready to handle the money. He stated that it’s her whole life, but he still doesn’t think she’s ready for the investment. He went out but complimented the gumbo.

Carol told the Sharks that she came to the tank not only for the investment but also for help with her business. She said that she had a good product and a great idea, and was asking for additional help. Daymond stated that she had decent margins, and asked if she talked to anyone to give them more incentive to produce the product. Carol stated that Co-packer is willing to become the vendor of record. She stated that they were looking for her to pay for the packaging, and she stated that she did not have the money. Robert was wondering what happened to the $100,000 she had made this year. Carol said that she split the profit with six brothers and sisters, and that’s what they all live off of while living together in one house.

Daymond asked how he could know if she was a risk or investment. She said that she needs help tracking the money. Daymond stated that Mee-ma’s Louisiana Gumbo Brick was on a great path, but he was out. He was too busy to meet her needs. Carol looked disappointed. Kevin said that she was valuing her company at a million dollars, but she wasn’t there yet. He was usually cut and dry, abut he conflicted about this because he believes in the product, but the business wasn’t built up yet. Carol said she knows that’s one of her weaknesses.

Robert told her that he loves gumbo, but was worried about the margins. He said that once you scale a food business, the margins get smaller. You have to be careful with the numbers to make it work. He told her that she would be better suited to finding an industry partner with her money, and he went out. Lori took a minute. She was computing something. Kevin asked what she was going to do. She said that she loved the gumbo, but she was on the fence about the finances. Carol stated that she was homeless at the moment, and her entire life was the business. Kevin asked where her daughter was, and she indicated that she bounced back and forth with her to friends houses and her sister’s place. Carol’s daughter was her helper-  and was involved in every part of the business.

Kevin was moved and said that he would put up half the money. It was up to Lori now. Lori decided to go in but offered $200,000 at 50%. They said it was so they could put the required work into it so that they make their money back, and make her successful. Kevin said that her business wasn’t worth the valuation, but he saw that she was willing to work. You could see a glimmer of compassion under the hard exterior. Carol accepted the offer, and Lori hugged her. Kevin told her to be ready to work her ass off. The Sharks all looked proud of her. Daymond congratulated her in finding a heart in the Grinch.

The $200,000 deal that she received from the sharks never went through. Despite that, Carol was able to continue selling the Gumbo Brick. At one point, she even got the products in at Costco, Public, Safeway, and several other grocery stores. She also started to sell the product online through their website and on Amazon, where it received many positive reviews from customers.

At some point in early 2021, however, their official website went dark. Many feared that it meant the company had shut down. To everyone’s relief, the company eventually came back a few months later with a re-designed website. Around the same time, they landed a deal with Albertsons and Vons Markets in Southern California; their first truckload order was sent off in November 2021, according to their Facebook page.

As of 2022, the company is still up and running. For those who are interested, you can grab the Gumbo Bricks from their official website. There are two flavors: seafood and chicken, both of which retail for $65.95. They also offer a ‘Two Plus Two’ set that includes two seafood gumbo bricks and two chicken gumbo bricks.

However, they only ship to a few specific states (California, Arizona, New Mexico, Nevada, Idaho, Texas, Utah, Oregon, and Washington) at this time. But it looks like they’re working hard to bring the product to the rest of the country, as well as Canada.

If you’d like to keep up with the latest updates, consider following Mee Ma’s Gumbo Brick on social media. They have an official Facebook page, which includes customer reviews (they currently have a 4.2-star rating out of 22 reviews), as well as an Instagram account (@meemasgumbo). 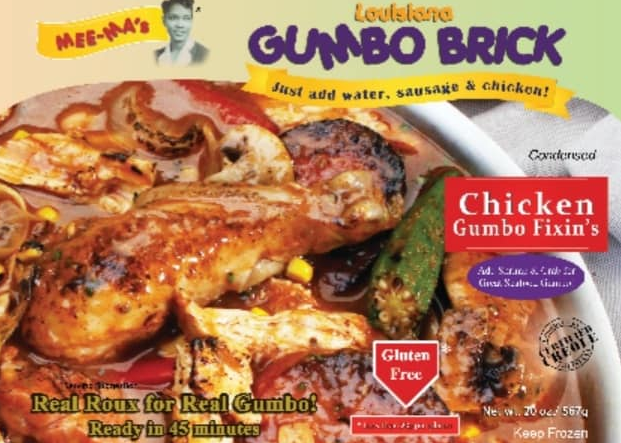