Smartwatches are exactly what they sound to be, watches with a screen and electronics instead of mechanisms and a clock interface. However, each device can perform many different functions when powered on. The Apple Watch is powered by applications from the iOS app store, and the Moto 360 is powered by applications from the Play Store. The Apple Watch has a more unique interface and somewhat of a learning curve to using its full potential, while the Moto 360 is more user-friendly and involves swiping through Google Now cards instead of a new interface being designed.

“Smart wear,” smart devices that a user would wear on their body, are no new concept, but they are new to the market. Both devices unfortunately suffer from a small, still-developing application market, but each day more and more advances are being made from both the developers and the actual application/content creators. In June, Google actually had to create an update that would allow users easier access to the selection of their applications or finding where to download them. Smart watches synchronize with your phone (you guessed it, the Apple Watch is restricted to Apple devices and the Moto 360 is restricted to Android devices, and the chance of cross-platform communication is pretty much nonexistent) for dependency and for accessibility. If someone texts your phone, then your watch will display it as well. 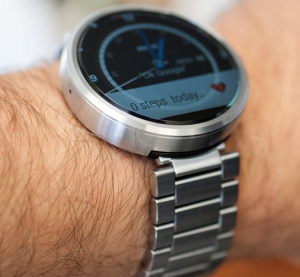 Both watches show a screen that emulates a simple watch, and these screens are interchangeable. Customization on smart wear, let alone smart watches, is huge. A user can change the display of the clock to whatever they like, including an interface ripped right from Goldeneye for the N64. However, the Moto 360 still has a large advantage over the Apple Watch due to the sole fact that it runs a much broader operating system, and a much more developer-friendly one.

The Motorola Solutions Inc (NYSE:MSI) Moto 360 and Apple Watch are around the same size, with the 360’s screen being a circle and the Apple Watch’s screen being a rectangle. The Moto 360 has a slightly bigger display but has a much looser pixel density (DPI, or dots per inch), so it may not as crisp as compared to the Apple Watch. The Moto 360 does have a much more narrow bezel though, allowing for a much easier time reading any information on the tiny screen.

The two watches also have two unique alert mechanisms. The Moto 360 has a vibrating mechanism similar

to a phone, while the Apple Inc. (NASDAQ:AAPL) Apple Watch has a “Taptic Engine,” which presses against your wrist. It almost feels like someone is tapping you on the wrist. Near field communication (NFC) is supported by the smart watches as well, as they let you share contact information through included apps by tapping the watches or shaking hands, and even exchange files, with more complex apps, just by placing the devices next to each other.

Which Smartwatch is Worth the Price – the Apple Watch or Moto 360?

However, the price is almost certainly the deciding factor between the Moto 360 and Apple Watch. A Moto 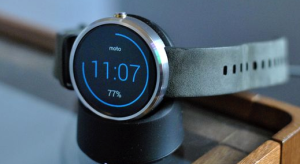 360 with a steel link band costs as much as $300 (I was even able to find a deals down as low as $250 to $230), while an Apple Watch by itself costs $350. Add a steel link band onto the Apple Watch, and it suddenly costs $900. However at the end of this post is a link to get the apple watch at a substantial discount right now on Amazon.com

Unfortunately, despite the Moto 360 being my clear choice of smart watch, you’re limited to the brand of your phone. iPhones are stuck with Apple Watches, and Android users… have a little bit more choice.

Click here for the best price online for the Moto 360