What Happened to Ronaldinho – What’s He Doing Now? 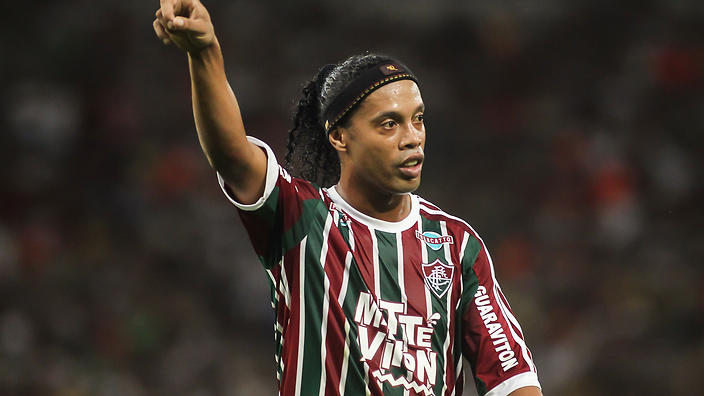 What is with being called Ronaldo and being good at football? Seriously I can think of a half-dozen off-hand. It’s lucky then that Ronaldo de Assis Moreira goes by the diminutive Ronaldinho. Few can boast a career as impressive as Ronaldinho, from Grêmio to Fluminense this soccer superstar has scored 201 senior goals and has 97 caps for Brazil. So what’s he up to these days?

Ronaldinho was born on March 21st 1980 in Porto Alegre, Brazil to Welder João Moreira and cosmetics salesperson Miguelina de Assis. His family has always had a strong focus on Soccer. His father was a former professional player, his brother and uncles as well. He idolized his father and said it was for him that he played. Unfortunately João suffered a fatal heart attack when Ronaldinho was only eight years old, one year after Ronaldinho began playing youth soccer. 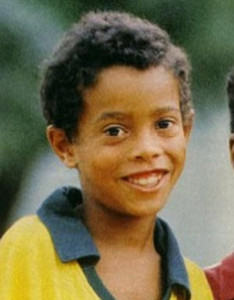 Young Ronaldinho, bit of a redundancy there, received the nickname with his youth team, due to his small stature. When he went on to senior national soccer there was another Ronaldo so the nickname stuck. His junior career on the field was nothing short of astounding. Once, while 13 years old, he scored 23 times in one game, though he would concede the team he was playing against were terrible. He led his team to several junior championships.

At seventeen he won a call up to the Brazil U-17 squad. The team would go on to win the U-17 World Championship in Egypt, 1997. He attributes his ball control skills to his time playing Futsal, an indoor variant of Soccer played five a side. He translated the close quarters nature of the game to the field and used it to run rings around the opposition. Many of his signature tricks originated in futsal also.

Shortly after his success in the U-17 championship Ronaldinho was signed by the Brazilian team Grêmio. He made his senior début in 1998 during the Copa Libertadores tournament. The following year he was invited to join the Brazilian senior team for the Confederations Cup in Mexico. He put in a stellar performance, being both the top goal scorer and winning the Golden Ball, awarded to the best overall player. He would also help Grêmio win the first Copa Sul-Minas.

By 2001 Ronaldinho was an established international star. He left Brazil for Europe, the home of world-class soccer. Initially considering a deal with the English side Arsenal he eventually signed with the French Paris Saint-Germain. He had a fine career at the French side especially early on, scoring a total of seventeen times in fifty-five games. This early success was marred somewhat by his performance off the pitch. Manager Luis Fernández claimed that he was a little too focused on the Parisian Nightlife and not being too punctual with his vacations.

In what was perhaps his greatest moment he joined Brazil in their fifth World Cup victory in 2002, scoring twice in five matches. In 2003 Ronaldinho fulfilled a life long dream in signing with Spanish side Barcelona. They outbid Manchester United to secure him, a not insubstantial thirty million euros. His Debut with Barcelona was explosive, scoring in his first game. Sadly he was struck down with a torn hamstring in October 2003. 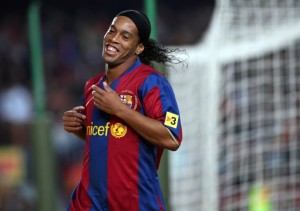 Barcelona would slump to 12th position in La Liga during Ronaldinho’s recovery. Upon his return he scored fifteen goals and help the team finish in second place that season. In 2004 and 2005 Ronaldinho won back to back FIFA World Player of the Year Awards, a feat first achieved by Ronaldo Luís Nazário de Lima, better known as simply Ronaldo. He also led his teammates through their 2006 Champions League victory.

He continued his success with Barcelona throughout the 06-07 and 07-08 seasons, though he experienced international disappointment with his performance in the 2006 World Cup. In July of 2008 he turned down an offer of twenty-five million pounds from Manchester City, instead signing on with Italy’s A.C. Milan. His time with Milan was not to the same standard as we were used to seeing from him, underscored by his exclusion from the 2010 South African World Cup. His coach at Milan has been quoted as being unsurprised by the decline, citing his partying as a major factor in his physical conditioning.Ronaldinho at Barcelona

He returned to Brazilian Soccer in 2011. Signing with Flamengo on a four-year contract. Getting off to a great start in his first season the side would win the 2011 Campeonato Carioca. Things went south shortly after, with Ronaldinho missing practices and putting in a non-committal performance. No reason was given for his change of heart and his contract was terminated in 2012, citing unpaid wages.

He signed with Clube Atlético Mineiro in June 2012 and was immediately back on form. He led the team to a decent 2012 season, placing second in the Campeonato Brasileiro Série A and winning the Brazilian Golden Ball Award. The following year he helped Atlético win the Campeonato Mineiro and their first Copa Libertadores, which won them the right to play in the FIFA Club World Cup.

After winning the 2014 Recopa Sudamericana with Atlético he left the club by mutual consent. He became a free agent and received offers from teams the world over. He eventually signed a two-year contract with the Mexican side Querétaro F.C. in September 2014. He performed well with the squad but the following July he left to return to Brazilian football.

What is Ronaldinho Doing Now?

2015 has been an interesting year for Ronaldinho. He signed with Brazil’s Fluminense FC for two months, playing in nine games. He failed to impress and was heavily criticized by fans of the club. Very recently he was seen marketing a golden Segway, erroneously called a hoverboard by some, retailing at seven hundred dollars. An interesting niche market for the Soccer star, let’s see if it pans out next year.

At 35 he may well be past his prime on the pitch though his coach at Fluminense FC was quick to stress that he was not retiring. His Future as far was Soccer is concerned is up in the air until a few weeks back. It has been confirmed that Ronaldinho is being courted by a Uruguayan team, though which one has not been announced as yet. Spokespeople over at Club Nacional de Football claim they are close to striking a deal, though Ronaldinho has only played in a few friendly games in the last 18 months, he is still able to bring something to the pitch.