Shred Matrix® by MusclePharm is a weight loss supplement that is specifically formulated to help with weight loss across several different mechanisms.  In an industry that rakes in billions of dollars in revenue, you’ve probably seen dozens of commercials and infomercials on the latest and greatest pill the promises to burn fat lose weight.  Unfortunately many of these claims are false as the marketing and labeling is not strictly regulated when a product is marketed as a dietary supplement, some have even been linked to death.  Luckily there are a few select compounds and molecules that have evidence for aiding in fat loss, some of which are present in Shred Matrix.

Weight loss supplements are notorious with false claims.  Always be wary of products that don’t list the active ingredients and blends that have labelling with “proprietary” on them.  It’s just a fancy word that tells you that the company refuses to share with you what’s truly in their product.  Again, ALWAYS READ THE LABEL on a weight loss supplement and make sure you know exactly what’s going in your body.

These supplements can be grouped into several different types: thermogenics, fat burners, blockers, and appetite suppressants to list a few of the major classes.  Many of the products available include a variety of different compounds which fall into multiple categories.  Let’s go over some of the compounds and molecules that have evidence to show that they’re effective:

To many people (including myself), caffeine is a miracle drug.  It wakes you up in the morning, enhances performance in both strength and endurance activities, and has been associated to fight certain diseases such as Alzheimer’s and cirrhosis.  You can add fat oxidation and increased metabolic rate to the list as caffeine is a very potent fat burner.  The primary downside is you will likely have to cycle its use as your body builds tolerance to its effects.

Back in the day when it was legal to market ephedrine as a weight loss compound, it was included in all major weight loss formulations due to its high level of effectiveness.  Unfortunately due to abuse of such products and the side effects associated of too much consumption of this compound, ephedrine was banned for use as a dietary supplement.

In comes it’s younger brother, synephrine (or P-synephrine).  This compound is naturally found in citrus fruits, particularly oranges, and functions similarly to ephedrine but with less severity.  It’s a compound known to provide a slight increase in metabolic rate and works synergistically with caffeine.

This ingredient consists of four different molecules which are highly bioactive and generally good for your health.  In regards to their potency in far burning, the most active molecule within the green tea catechins is epigallocatechin gallate (EGCG) has been shown to have significant effects in humans for lipid oxidation and other related fat-burning pathways.  Green tea catechins and EGCG can often be grouped as a percentage of green tea extract so pay attention to the label to determine the amount you’re actually getting.

This stimulant is obtained from the bark of a tree in Central Africa and has been used to treat erectile dysfunction in addition to weight loss.  It works synergistically with caffeine and works by increasing adrenaline levels and inhibiting certain processes in fat cells.  Due note that this ingredient can have psychoactive effects and can lead to anxiety at high doses.

Shred Matrix – Does it Work?

Shred Matrix is a relatively inexpensive blend of weight loss ingredients which is marketed to support fat loss, provide energy, and suppress appetite.  I’ve personally used the product on multiple occasions to help drop weight for competition and the following section includes my thoughts on it. 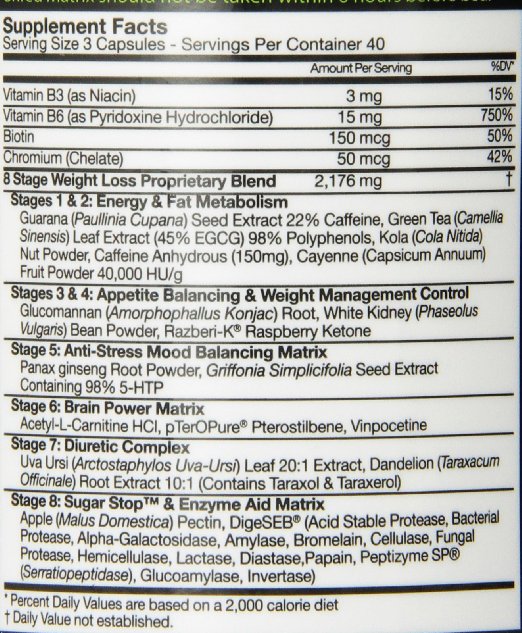 Aside from a few legal troubles regarding patent infringements and certifications on marketing, MusclePharm has been a fairly reputable company in terms of the quality of their products.  Most of their sponsored athletes are in the UFC which is where I was introduced to their product line.  Shred Matrix’s ingredient label features a 3-pill per serving of their 8-Stage Weight Loss Propriety Blend.  While I’m typically not a fan of proprietary blends, MusclePharm does a decent enough job of listing what’s in these pills and provides the concentrations of key compounds.

In the fat burning department, the primary driver in Shred Matrix is >150 mg of caffeine per serving which is in the moderate range of dosing for this compound.  I didn’t feel any jitters whatsoever with this product do to this amount of caffeine and partially to the addition 5-HTP.  Green tea extract is included and lists the 45% concentration of EGCG as a sign of good faith which is nice to see on the bottle; on the other hand it’s impossible to know how much EGCG is present based on the label.  The only other fat-burning compound worth mentioning is the inclusion of cayenne fruit powder and with its very bioactive compound capsaicin, is very much a welcome addition as it’s been shown to help with fat burning in human studies. 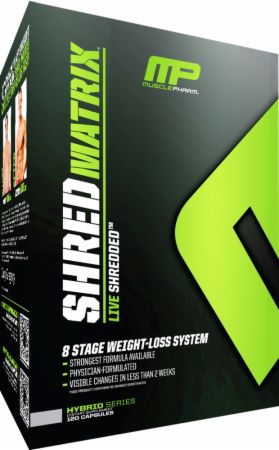 As an appetite suppressant, I’m not too impressed with Shred Matrix’s marketing.  On the label itself, the only effective ingredient for appetite suppression and marketed to do so is glucomannan, but the amount is unlisted so it’s difficult to discern if it actually does anything.  On the other hand, caffeine and 5-HTP are very strong appetite suppressants and have been shown to cut reduced sugar cravings in certain individuals.  A closer look into the proprietary blend label, a lot of the ingredients MusclePharm packed into this product can likely be left out and prove to be just as equally effective since many of the ingredients lack any scientific evidence for helping with weight loss.  The same goes for its Brain Power Matrix blend – aside from the Acetyl-L-Carnitine included (though actual amounts are undisclosed), there’s little evidence that it can function as an effective nootropic aside from caffeine.

One nice inclusion in Shred Matrix that I was pleasantly surprised with was the addition of its Diuretic Complex.  Uva ursi leaf and dandelion root extract are popular amongst bodybuilders, where they use it during contest prep to help cut water weight in the days leading up to their show.  They’ve been shown to be very effective and I noticed it very quickly when I cut carbs while on this product; I seemed to lose water much more quickly while on it.  Don’t mistake this reduction in water as true fat loss but for those who like seeing the scale reading drop quickly in the early stages of a diet, Shred Matrix provides a quick boost to your motivation.

Is MusclePharm Shred Matrix Worth it?

At around 50 cents per serving I find this to be relatively inexpensive compared to other weight loss products and a great value if you’re looking to only buy one product to cover your needs.  Keep in mind that each serving includes 3 pills, but they’re relatively small and easy to take down.  The recommended dosage is twice a day so you’re looking at a daily cost of $1 if you play it that way, still comes in at less than the cost of a mcdonalds cheeseburger per day. Personally I take this once a day in the morning while on an empty stomach and I’m happy with that.

You can currently get it with a huge discount automatically applied at Amazon.com by clicking here

As a one-stop shop for an inexpensive and effective weight loss supplement, Shred Matrix is a wonderful product when you need a little help with that cut.  It’s effects are very subtle but when combined with healthy nutrition and calorie deficit, it’s exactly what you want from a fat burning supplement.  It does a nice enough job suppressing your appetite (thanks to caffeine and 5-HTP) and even includes a few ingredients to help with water retention and bloating (listed above along with digestive enzymes).  If you’re in the market for a weight loss product, give it a try!