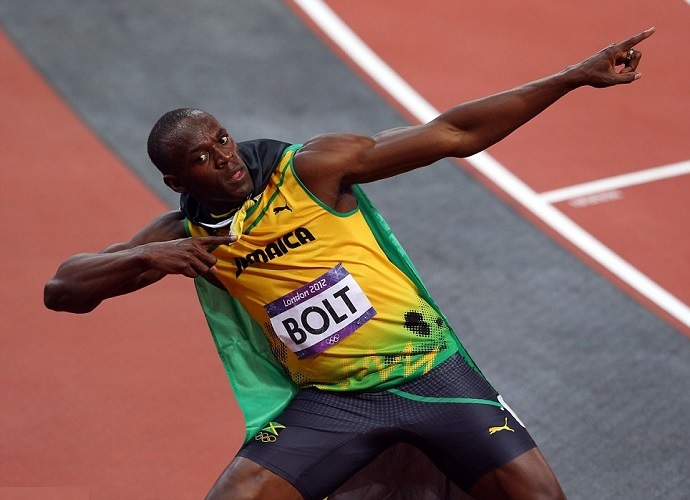 Usain St. Leo Bolt was born in August, 1986, to parents Wellesley and Jennifer, in the small Jamaican town of Sherwood Content. Usain’s main interest in early life was sport, although it wasn’t running that interested him at first The young Usain far preferred playing cricket and soccer with his half-brother Sadiki, whenever he had the opportunity.

Usain went to the local Waldensia Primary school, where his teachers first noticed the boy had an impressive turn of speed. By the time he was twelve, he had already surpassed all previous school records over the 100 metres distance. He moved on to the local William Knibb Memorial High School and continued to focus most of his attention on cricket.

It wasn’t long before the school cricket coach, who had become impressed by Usain’s increasing speed on the pitch, advised him to try track and field events. The school had a strong interest in fostering new athletic talent. It had been attended by Olympic sprinter Michael Green, who competed at the 1996 games in Atlanta, and the institution was keen to add another gifted runner to its list of former students.

Usain, who was by now 15, and had already reached his full height of 6 feet 5 inches tall, began improving his strength and athletic ability. He was coached at the school by Pablo McNeil, another retired Olympic sprinter, who ran at the 1968 games in Mexico. Full of natural talent, Usain flourished under the expert guidance of Pablo, although his coach often became frustrated at the youngsters fondness for practical jokes and his occasionally lacklustre attitude towards training sessions.

The young Jamaican attended the 2001 IAAF World Youth Championships in Hungary, his first meeting at an International level, and he ran a personal best over 200 metres, of 21.73 seconds. The same year he attended the Caribbean regional competition, The CARIFTA Games, and set championship records in both the 200 and 400 metres.

The practical joke loving Bolt also caused a fair amount of consternation for his coach Pablo McNeil, by hiding in the back of a vehicle, instead of preparing for the final of the 200 metres at the CARIFTA Games. When the missing athlete finally appeared, the police picked him up, and that led to much negative publicity for his long suffering trainer, when the press incorrectly reported that he had called the police on his young charge.

In 2002 Usain ran the 200 metres at the World Junior Championships. His time of 20.61 seconds gained him first place and he became the youngest ever recipient of a World junior gold. More medals followed as he became physically stronger and entered his peak running years, he attained four gold medals in the 2003 CARIFTA Games, and another at the World Youth championships later that year.

Fast gaining popularity at home in Jamaica, and now being noticed as a serious prospect for the future by existing 200 and 400 metres World record holder Michael Johnson, Usain turned professional in 2004, aged just 19. At the CARIFTA games in Bermuda that year, he took the World junior 200 metres World record, with a time of 19.93, and along with that achievement, also became the first junior to ever record a time of under 20 seconds in the event.

Usain’s first Olympics were the 2004 games in Athens. He had recently recovered from a hamstring injury that had kept him away from the World Junior Championships that year, and the injury affected his performance at the Olympics, where he was eliminated in his first heat in the 200 metres, with a disappointing time above 21 seconds.

As his natural talent, and raw speed began to be noticed by an international audience, the young runner received offers of scholarships from US based institutions, but he chose to refuse all such offers, instead preferring to stay at home and train at the University of Technology in Kingston.

In 2005 Usain got a new coach, in the form of yet another former Jamaican sprinter, Glen Mills. Mills worked not only on Bolt’s physical ability, but also his attitude and commitment, which at times had not been entirely professional, as the still young athlete would often fool about, and rely on his incredible speed alone to beat opponents.

Bolt continued increasing his speed at the 200 metres, but his new coach began preparing him for longer distances, with a particular eye on the 400 metres. Usain had more fitness problems, with a hamstring injury keeping him out of the 2006 Commonwealth Games in Melbourne. Glen Mills concentrated on a training regime that improved the runners flexibility and reduced the risk of further problems.

The improved training, along with Bolt’s more mature attitude soon led to success. He won a bronze at the IAAF World Cup in Athens later that year and followed it up with a silver medal at the 2007 World Championship in the 200 Metres. He had run a personal best of 19.91 seconds, and was second only to Tyson Gay, who set a new championship time of 19.76 seconds.

Glen Mills was reportedly happy with Usain’s progress in training during 2007, declaring that the athletes technique, balance and stride were all greatly improved. Although Usain didn’t win any major gold medals that year, he had been boosted by his World Championship silver and began to take a far more serious stance towards his career.

In May 2008, Usain ran the second fastest 100 Metres in history at a time of 9.76, second only to fellow Jamaican Asafa Powell’s World Record time of 9.74 set the previous year. Usain himself was impressed with his performance, as was second placed Tyson Gay, but trainer Glen Mills was sure that he had the ability to improve even further. The next month Glen was proved right in spectacular fashion, when Usain set a new World record in the event, at a time of 9.72 seconds. Tyson Gay again finished second to his great rival, and some commentators noted that Bolt appeared to have gained a psychological edge against him.

Usain trained for both the 100 and 200 metres in preparation for the 2008 Beijing Olympics, and it proved to be the highlight of his career, in the 100 Metres he broke all previous records, including his own, to win Gold with an incredible new World record of 9.69. And that was even with a noticeable decrease in speed as the runner celebrated, before the finishing line, he was that far ahead. Scientific analysis has since indicated that Usain could have achieved a time below 9.60 seconds, had he not taken part in that moment of show boating. He later said ‘I was slowing down long before the finish and wasn’t tired at all. I could have gone back to the start and done it all over again’.

In the 200 metres, Bolt seemed to be almost jogging as he easily qualified in his heats, and he was the clear favorite to win the gold, but Michael Johnson believed his own 1996 World record time of 19.32 would probably be safe. He couldn’t have been more mistaken. Usain destroyed the opposition in an incredible run, which contained no acts of celebration, at least not until after the race had finished, and he had set a new World Record of 19.30 seconds. It was a feat that Michael Johnson could hardly believe was possible, along with the rest of the athletics World. It was a nice way for Usain to usher in his 22nd birthday the following day.

Bolt took another Gold medal before the games were over, in the 4X100 metre relay alongside team mates Asafa Powell, Nesta Carter and Michael Frater. Between them, they also set another World record in the event. Later that year Usain earned even more fans in China, when he donated fifty thousand dollars to help the aid effort after the 2008 Sichuan earthquake. At the culmination of the athletics season, he was selected as the IAAF World Athlete of the Year.

On the 16th August 2009, at the World Championships in Berlin, and exactly one year to the day after his World record time in Beijing, Usain broke the record again. This time he achieved an incredible 9.58 seconds, over one tenth of a second faster than his previous World record, and the biggest improvement in the record since electronic timing was introduced in 1977.

Four days later, and also a year to the day after his record setting 200 meter race at the Olympics, Bolt broke that record too, achieving 19.19 seconds. Bolt attributed his success at the games to improved starting speeds, but he won the race by the largest margin ever in a World Championships, even though three other runners had made a sub 20 second run, the largest number of runners in a single race to ever do so. At the end of 2009, Usain was awarded the IAAF World Athlete of the Year for the second year in a row.

2010 brought achilles tendon problems for the World champion and he had no expectations of beating his record again that year, but by 2012 he was ready for the London Olympics. He won the gold with a new Olympic record of 9.63 seconds. He defended his 200 metre Olympic title successfully too, with a time of 19.32 seconds, and in the process also became the first man in history to defend both the 100 and 200 metre Olympic titles.

Usain has raised and donated over three million dollars to his hometown of Sherwood Content and has helped the small community repair the local health center, he continues to support the advancement of healthcare facilities throughout the rest of his home country too. In 2009 he became the youngest person ever to receive the Order of Jamaica, one of the countries highest honors.

During his career Usain has won the IAAF World Athelete of the Year five times, the Track & field Athlete of the year twice and the Laureus World Sportsman of the year three times.

Now 29, and still considered the fastest sprinter in the World today, Usain has confirmed his intention to retire from top flight athletics after the 2017 season, but he hopes to create one final historic moment in the sport before he finally retires. Although he continues winning on a regular basic, Usain has so far not topped the incredible success he enjoyed at Beijing in 2008 and Berlin the following year. But he has big hopes for the upcoming 2016 Olympic games in Rio De Janeiro.

He believes he can run 200 metres in under 19 seconds for the first time, and is also confident of defending both his Olympic titles for an unprecedented third time. Whatever the upcoming Olympics holds for Usain Bolt, he can retire securely, knowing that he has personally changed the face of modern sprinting, and set a new level of performance for future generations to follow.

Both of Usain Bolt’s World sprinting records, set in Berlin in August 2009, remain unbroken to this day.