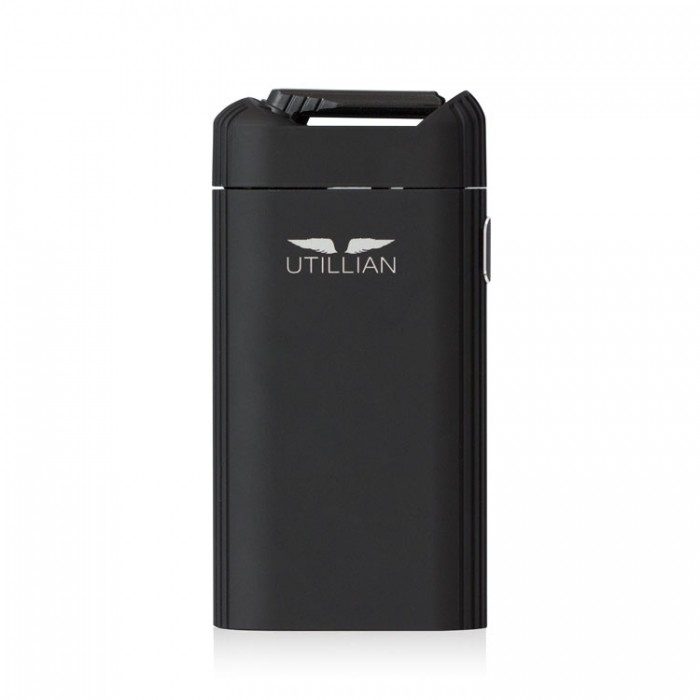 In 2014, the original Utillian 650 unit was launched – the Utillian. Utillian is a new vaporizer company of sorts, so it is always excited when a company brings forth innovations that might change up the vape game. The Utillian 720 looks very, very much like the (far more expensive) Crafty vaporizer, which is sort of a walkie-talkie type of grip.

The Utillian 720 is made from an aluminum base that has a black, matte rubber finish, giving the entire thing a sleek look throughout. The Utillian is equipped with a stainless steel heating chamber, which can be accessed by removing the mouthpiece and top part of the chamber. The top part of the chamber has a magnet connection, which allows you to quickly refill the tank with some dry herbs while still keeping the herbs locked in tight – don’t worry about the vaporizer flipping upside down and spilling everywhere inside your bag or pockets.

The Utillian 720 stands less than 9 inches tall when fully assembled, meaning it should be perfect for sliding into your bag or pocket and carrying around discretely. You also have the luxury of being able to remove the top chamber at any time, although this will leave your herbs exposed to the air – I really wish Utillian had thought of a way to keep the herbs covered, since a Utillian 720 without the top stands about an inch and a half shorter, making it absolutely perfect to conceal in your hand (but unable to take a nice, warm, thick vapor cloud draw.)

Sort of like the long-loved PAX vaporizer, the Utillian 720 vaporizer uses an LED in order to indicate the temperature of the oven. If the LED is glowing green, the oven is heated to a temperature of 170 degrees celsius. This includes blue for 180 degrees, purple for 190 degrees, and eventually, red for a full 210 degrees celsius. Note that you are best off using the coolest temperature first and working your way up to a hotter temperature. This ensures that most of your herb or product will burn evenly throughout,

The Utillian 720 has a plastic mouthpiece, unfortunately, which may not appeal to most hardcore dry-herb vaporizers. However, there have been comments that the plastic mouthpiece does not take overly-plastic and actually complements the flavor of the vapor, as well. The vapor at 170 degrees is fairly weak, but the sweet spot of 180 or 190 is absolutely perfect to both maximize the life of your herb and still get a great buzz. For concentrates and syrups, the highest setting will work perfectly due to the nature of the substance.

Just like the Utillian 650, the 720 only has 1 button. 5 clicks turn the button on, while pressing the button twice will allow you to cycle between temperature ranges. Pressing and holding the button during the cycling will enable a boost mode, which adds an extra 5 degrees of celsius to your vaporizer to really get the last remaining bit of herb. The Utillian 720 is also equipped with a 5 minute idle feature, but can be awoken from its sleep by pressing the power button 5 times.

While the Utillian 720 may seem expensive at the $219 price range, you should also consider that as of this review, the 720 is sold out and will be re-arriving on August 30th. The Utillian 720 is very hot and after some uses myself, I can see why this is one of the more popular vaporizers on the market. Utillian is a brand new company, who only hit the market this past year with their 650 model. I think that I can very safely say that I would personally spend $219 of my own money, with tax and shipping, to buy a Utillian 720 of my own – I had the fortune of being able to use a friend’s, but after looking into one for review purposes, I think I need one.

The Utillian 720 can be found at Vaporizera.com and is a great choice for anyone looking for a top of the line product at a great price.