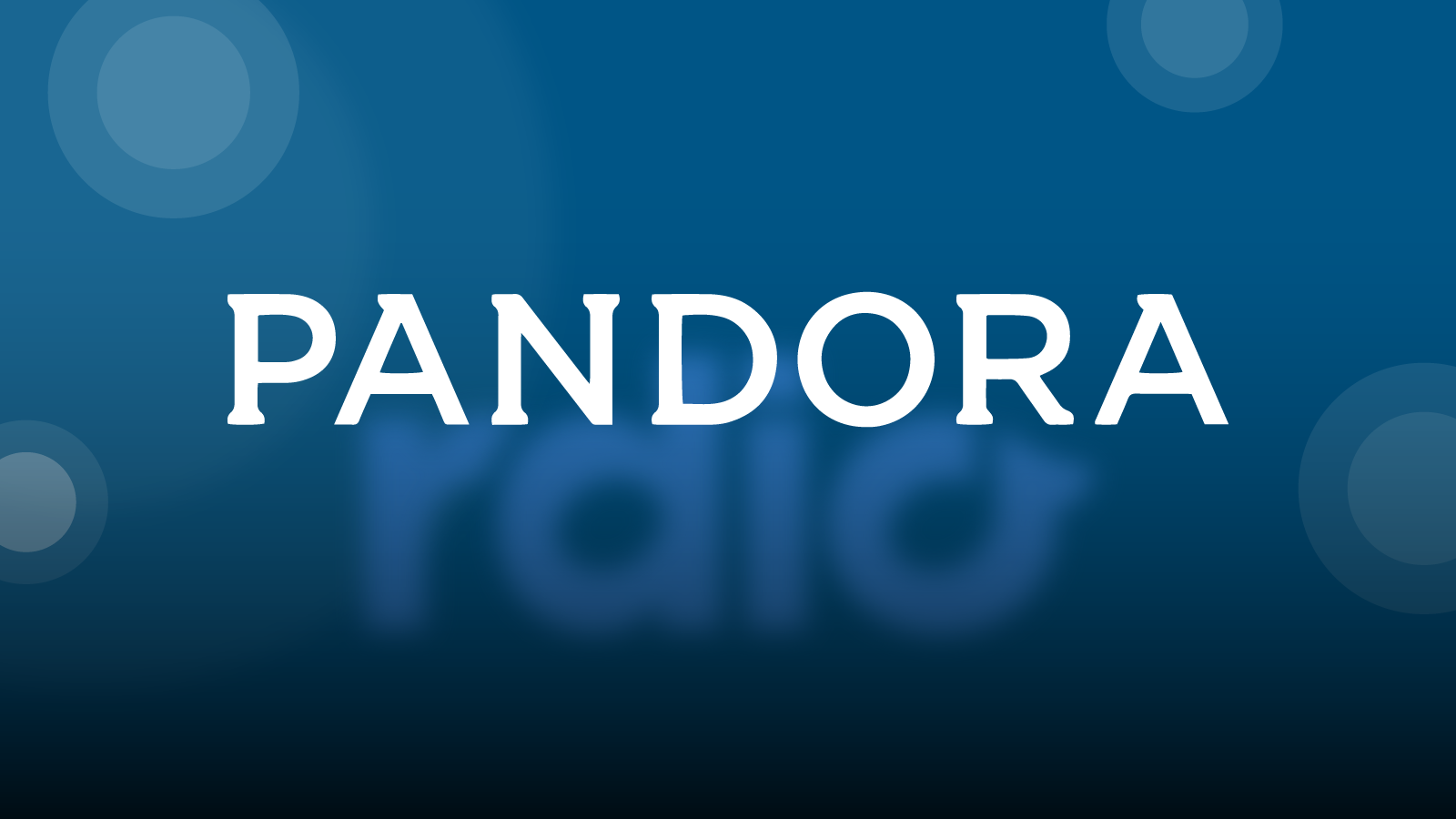 If you’re familiar with music streaming apps, you’re probably familiar with Pandora. Pandora is one of the oldest and most popular music streaming services, and it’s available on desktop and mobile devices. The basis of Pandora is simple. The user selects an artist or genre, and then Pandora plays a personalized radio station of sorts, running through different songs that the app thinks that you would like based upon your initially selected station. Are you looking for an app that provides a service similar to Pandora? In this article, I’ll break down the top five best apps like Pandora. Without further ado, let’s get right into it. 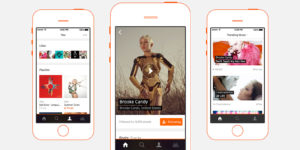 If you’re familiar with the desktop version of SoundCloud, you may be sort of confused by this pick. When most people think of SoundCloud, they think of a fairly basic website where you can go to find different tracks, most of which were created by independent artists. It’s more like a musically oriented version of YouTube than it is like Pandora, since you can’t really queue up a random playlist or station. However, SoundCloud recently tweaked a certain aspect of their service in response to poor performance. (There were rumors a few months ago that the service was actually on the verge of shutting down, due to lost profits.) In February of 2016, SoundCloud announced that they were adding Stations to their Android and iOS apps. Users are able to create Stations based off of any individual track or search term, and seeing as the service is absolutely packed with such a wide array of content, that means that there are almost limitless listening opportunities.

The only reason why I chose to rank SoundCloud on so lowly has less to do with the app itself, and more to do with the content library that the service has available. By its very nature, SoundCloud has a limited library of music compared to an app like Pandora. Not only that, but a lot of the music in this app trends towards newer or more independent material. For some people, this is a good thing. It helps you discover new and trending artists who you might not discover in the first place. However, I personally think that it makes the app a little more niche than some people may like. It’s a good app by all means, but I don’t think it’s as accessible as some of the other applications on this list. Nonetheless, SoundCloud has made significant strides in improving their services over the years, and I think that this is at least worth a look. 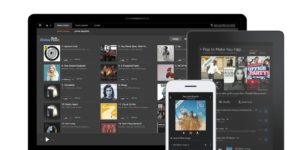 Speaking of up-and-coming services, Prime Music has been trying to break into the music streaming scene for a few years now. In fact, Amazon has been putting a lot of resources into pushing all of their Prime-based services, including Prime Photos and Prime Video. Amazon Music with Prime Music seems to be the online retail giant’s answer to apps like Pandora, and thus far, it’s done a pretty good job. For Prime members, the app offers a tremendous amount of freedom. You’re able to browse from over a million free tracks, and you’re given unlimited access to a ton of different ad-free radio stations. (Advertisements in music streaming apps is a major deal-breaker or annoyance for a lot of people, which already gives Amazon Music a significant advantage over other apps.) The app also lets you shop from an enormous library of tracks to add to your personal collection.

However, that isn’t to say that Prime Music is perfect. You may have noticed that I mentioned that Prime Music lets you freely stream over one million free tracks. This may seem like a lot on paper, but consider that services like Spotify sport over 20 million tracks. Amazon’s catalog is absolutely dwarfed in comparison. Not to mention, although Prime Music may be ad-free, that doesn’t necessarily mean that the service itself is free. As you may have assumed, ‘Prime Music’ indicates that you need to be an Amazon Prime member to use service to its fullest extent. A Prime subscription costs around $99 per year, and although that’s an excellent deal with all things considered, this isn’t the best app for someone who doesn’t already have a subscription. If you’re already a Prime member, though, you should be pleased with the service. 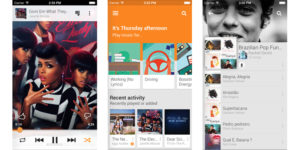 Google is one of the biggest companies in the world, and so it only makes sense that they would have their teeth sunken into the increasingly lucrative music streaming industry. With a free membership, users are able to use this application to listen to various ad-supported radio stations, with similar functionality that you would see out of Pandora. If you’re interested in on-demand music services (which is where you’re able to pick and choose single songs to listen to) then you’ll have to become a paid member, which will run you close to $9.99 per month. Remember when I talked about library size before? Google Play Music reportedly has a library of close to 30 million songs, which makes it arguably the largest out there. Even better is the fact that Google gives you the ability to upload your personal music files onto your library, which enables you to consolidate all of your music into a single setting.

My only real quarrels with Google Play Music have to do with the need to pay to access their on-demand service. (To be fair, Pandora doesn’t even have on-demand streaming at all. There are rumors, though, that it will be added soon.) Not to mention, the app itself lacks a certain level of user intuitiveness. Google cranks out some great services, but their apps are known for being sort of buggy. It’s one thing to have Gmail crash on start, but it’s another to have your app’s functionality interrupted while you’re in the middle of listening to music. If Google would tweak the user interface a little bit, and put some resources into debugging, then it would see itself a little higher on this list. 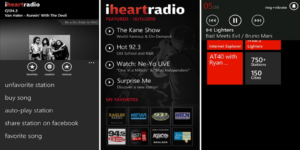 iHeartRadio has been around for a long time now, and it is widely regarded as one of the darlings of the music streaming industries. This app. at its core, is a pure radio app. There’s a slight wrinkle, though. iHeartRadio allows users to listen to a host of actual radio stations. If you like the experience of listening to traditional broadcast radio without having to go into your car or break out your alarm clock, this is definitely the app for you. Keep in mind that this offers the same level of restrictions as traditional radio, though. You can’t skip tracks as you would be able to with an online “radio station”. There are still some advantages to the format, however. Custom artist stations in this app are entirely ad-free, which as I mentioned before, is a huge plus for anyone who regularly uses these sorts of services.

If you’re not interested in a more traditional radio experience, though, then you’re still in luck. iHeartRadio also lets you browse their custom radio stations, however. These stations are more what you would expect from a music streaming service, and they have skips and thumbs ups and thumbs downs and all of that good stuff. When it comes down to it, there isn’t really anything wrong with iHeartRadio. It’s an excellent service, and it offers absolutely anything that a Pandora fanatic would ever need. It doesn’t offer on-demand music but, as I mentioned before, Pandora doesn’t have the either. The only reason why this app wasn’t able to top the list is simply because the next app we’re going to talk about is an absolute juggernaut. Even though this app win gold doesn’t mean that it isn’t well worth your time. I highly recommend it to anyone looking for an app like Pandora. 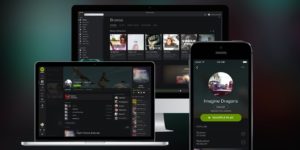 Somehow, I don’t think that this choice is much of a surprise. Spotify has been considered one of the greatest music streaming apps for years now. They dominated the industry early on, and they’re still doing an excellent job at maintaining their grip at the top. Spotify, if you’re unfamiliar, is a music streaming service that allows users to listen to music by selecting songs from an on-demand catalog, through playlists, or through radio stations. The Spotify library is absolutely massive, with well over 20 million songs available. You would be hard-pressed to not find a song that you’re looking for. Not to mention, all of this functionality is available completely for free. You don’t need to have a paid membership to get into the door. You’re able to purchase a paid membership if you’d like, but really, the upgrade isn’t anything to lose sleep over. You gain a lot of neat abilities, like complete ad-free listening, offline listening, and so on. Even if you have a free membership, though, you’ll find that the application is more than enough on its own.

If you like Pandora, then you would probably really enjoy using Spotify. The user interface can take some getting used to, and the difference between playlists and radio stations can be confusing. (A lot of radio stations are called radio stations, when they’re really just playlists that are 20-30 tracks long.) Once you’re over that hurdle, though, then you should have no further issue adjusting to the service. When it comes to library size, functionality, and value, Spotify is absolutely unmatched in the music streaming industry. I highly recommend it to any fan of Pandora who happens to be looking for something different.