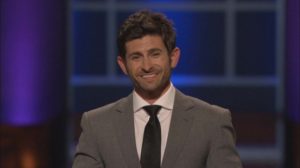 Aaron Marino, a self-described “male image consultant” and men’s style expert, first gave his valuable expert advice away for free to a friend that was nervous about getting ready for a date. In 2006, he then decided that he might as well get paid for it! He developed a website, as well as a series of DVDs to help men get ready for a date. Alpha m. Image Consulting group aimed to assist men who needed assistance in the dating arena with personal grooming tips, style, fashion, and most importantly – self-confidence. He was offering this advice for the price of $297 for the DVD series. Before going on Shark Tank, he only sold ten systems. In 8 years. Let’s see how the Sharks react to that news.

Aaron strode confidently on stage and introduced himself to the Sharks. He immediately got down to business and asked for $50,000 in exchange for 10% equity. Apparently forgetting that Barbara was there, Aaron said that “as men,” they are motivated by sex and money, and he could help them get more of both of those things. Robert seemed impressed by his candor, if not by the product. Aaron claimed that there were “zero” resources for the average man to use to increase his confidence and dress with style. He did acknowledge that there are men’s fashion magazines but insisted that they only catered to the most attractive and wealthy men. He said that the average man was not interested in learning about pricey new fashion accessories, they just want to know how they can get women.

Aaron said that men are not encouraged to look nice, and when they do they are called names like “Metrosexual.” He stated that his clients would one up the bullies on the corporate ladder, and get the numbers of the women that rejected them. This had all of the Sharks amused. He then pointed to his DVD series, which he claimed would help the average man analyze his wardrobe, and improve on it. He then brought out an example average man named Joe. Joe walked out on stage wearing baggy khakis, a wrinkled button up shirt with a white t-shirt underneath, and sandals with socks. Aaron said that his formula could help Joe become an alpha male. Joe walked behind a wooden barrier, and with the magic of twins, immediately walked right back out. This time, he was dressed in form fitting clothing- nice jeans, a collared shirt and sweater combo, and actual shoes.

Barbara jokingly said that she would take this Joe. Robert asked if they could see the two side by side, and Aaron called the Sloppy Joe back out. Robert asked what he would be getting if he were to purchase the six-disc DVD system. Aaron when into the “Style System,” which is a comprehensive list of 57 fashion must-haves ranging from Black dress shoes to Gray Semi-Dress Pants. Outfits are made via a formula. Each item on the inventory list has a corresponding number and letter. The man who purchased the style system would pair outfits together based on a simple equation.

Robert asked Aaron where he was from. Aaron said that he came from Atlanta, but he was really an Everyman who happened to know more about “manscaping” and shoes than sports. Robert then asked him if he could make anybody better looking, even Mr. Wonderful. Aaron agreed, and Kevin walked up on stage. Aaron told him that his suit jacket was a little too tight. Kevin laughed and said that he was a couple of pounds overweight. Robert then asked him if he would put Kevin in a toupee, and Aaron said “Oh God, no.” Kevin said doing so would damage his brand. Aaron stated that he would probably just angle his sideburns slightly to follow his jaw, and bring them down a little. Aaron sucked up to him a little bit, saying that everything else looked great. Kevin said he might just give Aaron ten grand for the heck of it, and walked offstage.

The Sharks were starting to look interested until Kevin asked how much the DVD’s would be to purchase. Aaron told them the unbelievable price of $297, and they all looked a little put-off. Kevin asked how much Aaron sold in the last six months, and Aaron stated that he just launched the company. He said that he sold 75 units in the last four weeks, for a total of $22,500. Aaron projected that he would make $61,000 in sales for the quarter. Robert asked him how he intended on doing that when he had only sold 75 DVDs. Aaron stammered that 50% of his sales of the Alpha M style system were local, and he also made money on consulting. He said that he might be shipping out DVDs, but he was actually selling confidence.

Daymond cut in at that point. He said he was known as the Bloodhound because he gets to the bottom of things. He asked Aaron if he was just looking for money, or if he was also looking for help. Aaron said that he did need help with the technology and the international distribution. He was looking for a partner in the Sharks. Aaron himself did not put that many hours in as he had a full-time job. Daymond went out, saying that he did not have the time.

Kevin was up next. He told Aaron that he believed that he was running an okay business, but he said that he wasn’t sure how leverage-able Alpha M really is. Aaron is the whole brand, so what would happen if a guy wearing the wrong clothes ran over him in a van one day? Aaron said that he sees his death as an opportunity. He thinks that the angel look would work for him, and he would get more business being a “Style Guardian Angel.” Kevin said that what they really learned today is that he is the best dressed Shark. But even that is not enough to get him to invest. He went out.

Barbara said that what they were really losing track of is the price of the DVDs. She said that she doesn’t think that anyone would pay that much for the DVDs. She called Aaron misguided, and she went out. Aaron went to cut her off, asking her what is the price of a compliment. The other Sharks laughed at him, and Mark seemed especially amused. Robert told him that he appeared to be a great consultant, but he doesn’t think the average guy is going to go out of his way to buy the DVD on his own, especially not for the price being charged. He doesn’t think that the end results of the average man buying the DVD and using it on his own would be as great as the example that Aaron brought in. Robert went out as well.

Mark said that he thought the sloppy guy was wearing the better outfit choice and asked Aaron if he would be embarrassed to have Mark Cuban as his investor looking like that. Mark said that there was no way that Aaron could get him into a tight sweater. He went out, saying that he was just not a good fit for the business. Aaron stated that he understood, and walked off the stage. In his post-interview, he acknowledged that you win some, and you lose some.  He seemed pretty upset about it, though. It seemed like Alpha M was a loser. 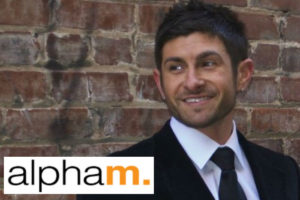 By some miracle, this company appears to be still alive and well. Aaron is still selling his videos, which are also available for download on his website. He puts out weekly short videos for free on his YouTube channel. He has a blog related to alpha m, where he posts regular updates. He also used it to complain that Shark Tank did not announce that he had a web presence, so he only sold one DVD set on the night his episode aired. Clearly, it was Shark Tank’s fault that no one googled him after the episode and nothing to do with the product. On an entirely different note, he has since lowered the price of his product to $75.

He is pretty active on social media, but mainly for his other businesses. Aaron even went back onto Shark Tank with a new product, Called Pete & Pedro. It is a hairline for men that Aaron claims were “born out of the rejection” that he experienced from his first go around on Shark Tank.