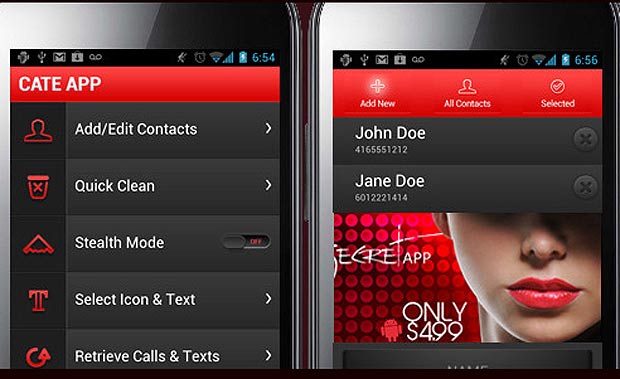 Before appearing on Shark Tank, Neal Desai has been a hustler all his life. When he was 14, he sold Pokemon cards and other things on Ebay. He was in contact with a police officer who was working on the CATE app and did not have time for it. Neal purchased it for $17,500 and scrounged up 10,000 customers. Let’s see how he’ll fare with the Sharks. 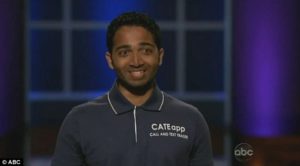 Neal Desai walked out on the stage and greeting the Sharks. He introduced himself and told the Sharks that he was seeking $50k for a 5% equity stake in his company. He said that they’d all known someone who has been cheated on, cheated themselves, or has been accused of cheating. This got a laugh from the Sharks. He then showed them a video of a couple lying in bed. The guy gets a text, and the woman immediately wants to know who it is and grabs for the phone. She gets it and reads the text message. She wants to know why “Jenny from work” is texting him, and accuses him of cheating on her. He denies it, and she slaps him. The video ends.

The Sharks all laugh, and Barbara asks Kevin if he’s experienced the same thing. He just says “Woah,” and doesn’t answer the question. Kevin wants to know more. Neal, looking extremely nervous, said that the app helps prevent fights like this from occurring by keeping those conversations more discrete. A huge mockup of a smartphone shows what the app looks like, displaying options like Stealth Mode, and the ability to Quick Clean. Neal said that it’s an app where you input contacts that you want to keep secret. If one of those numbers texts or calls, it gets hidden and stored. If the jealous partner looks at the phone now, she won’t see anything. Neal says that if Tiger Woods had used his CATE app, he might still be married.

This had the Sharks laughing again. Neal then brought out the big guns – statistics. He said that 80% of Marriages have at least one cheating partner. Robert told him to shut up, but Neal insisted that it was true. He then said his tagline – “If love is blind, we keep it that way.” This got another laugh. Robert attempted to clarify for the audience that it was a cheater’s app. Neal tried to say that it was actually a privacy app. Robert was having none of it. He wanted to call a spade a spade and say what it really was. Neal finally agreed and said he was ok with that. Mark told him to go with it.

Daymond asked why he decided to develop this product, as he did not seem like the cheating type. He said he did not actually develop the app. He said he found a cop who developed the app but did not have time to work on it. He told the Sharks that he paid $17,500 for the app. Robert looked shocked. He said that he shares ownership with his sister. Barbara asked him if the app was totally developed, and Neal confirmed that it was. He stated that they just finished the IOS version a few weeks before his Shark Tank episode, and they were now on Android and Blackberry platforms.

Daymond asked him how much he had invested in the app. Neal told him they were at around $40,000 currently. Kevin said that he wasn’t sure on the morality of cheating since he has never done it, but he knows that there are people that have. He stated that he understood that they might need a product like this. Kevin then asked Neal what his sales were like. Neal said that he currently has about 10,000 customers who really seemed to impress Robert. Neal then elaborated that he has about 4,000 free customers and 5,500 paid ones. Robert asked how much the actual cheaters paid for it, and he was told the app costs $4.99 on Apple and Android platforms, and $9.99 on Blackberry. Robert then tried to clarify how much he’s actually made so far since the CATE app had a valuation of one million dollars. Neal said he made $5,500. Kevin stated that he might be the actual cheater.

Daymond asked him why he was offering such a low percentage of the business. He asked Neal if he was actually looking for a deal. Neal confirmed that he was. He said he knew that the equity was negotiable, so he might as well start with the lowest amount to see if any of the Sharks would bite for it. He could always go up from there. Robert then asked him if he had any issues or concerns about the morality of the product he was selling. Kevin looked shocked that he even considered it, and asked him what he was talking about. This interrupted Neal, who was in the middle of answering. Robert told him to let Neal finish, but Kevin said that he could answer for him – the answer was “No.”

Neal said that he could put it a better way. He used the example of the Sharks not liking carrots, but carrots sold at a 100% markup. He asked them if they would jump in ready to make money, or if they would stick to their principles. Mark said that he understood that he was going to go where the money was – as he put it, “This is not morality tank.” Kevin said that the deal had a crazy valuation. He did not believe that it was worth a million dollars. Kevin stated that he would give Neal the $50,000 he was asking for, but at 50% of the business. Neal looked around, saying that he would like to hear the other offers before he made a decision.

Mark asked if there were any other apps that Neal could use this code base for that he’s considered. Kevin interjected, saying that he believes it would be good for the mutual fund industry. Apparently, the brokers don’t like any sales data to be shown on their phone, and Kevin could see using it for that. He said that he would like to use it in his business on all the sales reports. Neal nodded along, but it looked like this conversation went a little over his head.

Neal said that this app was primarily to prevent fights. He’s known people in his life who weren’t necessarily cheating on their partners, but their partners would get jealous if they received a text from someone of the opposite sex. This would happen even if the person texting were someone innocuous, like a friend. Mark looked amused and told Neal that he was saving people’s lives. Neal laughed and said he was like a firefighter. Mark stated that he liked his passion and his hustle, but he did not like the app. He went out.

Robert said that there is a website out there for people who want to cheat on their spouse. He was most likely talking about Ashley Madison. Kevin said that he not only knew the man that runs that site, but he was also seeing him that weekend. He stated that he would bring up the app as soon as Neal agreed to form a partnership. Neal said that it was really hard for him to believe that he doesn’t cheat. Which seemed like a strange strategic move. Why would you accuse your potential investor of something like that? He said that he was just kidding, and Kevin insisted again that he doesn’t cheat. Kevin stated that he knew he was just interested in money, and he said that they would make good partners.

Robert stated that he had a different philosophy and that he did not want to be in any business where he wouldn’t feel comfortable bringing his kids to work. He went out. Daymond said that this wasn’t. His field, but he would like to partner up with Kevin. Kevin stated that he was interested. Barbara said that he loves the idea behind the application, and sees a wider use. She stated that she had a husband in the FBI who worked with snitches in white collar crime. She said that the biggest issue was that they didn’t want their name on his cell phone. She stated that labeling it as a cheater’s app was narrowing its focus too much. It would do better as just a privacy app. She decided to make him an offer, by herself. Barbara said that she would fund CATE app at $50,000 for 30%. The only trick was that he would have to be open to re-branding it as a privacy app.

Kevin said that this was the big moment where he had to make a choice. He said that Barbara was just a real estate agent with no experience in the software industry. She cut in and said that she built a $1,000 loan into a $5 billion business. She did not want to hear Kevin try and cut her down. Daymond stated that he and Kevin would be the muscle that Neal needs to be successful. Neal countered all three of them at 15%. Kevin told him to stop screwing around. He offered him 35% for both Daymond and him for the business. Daymond said that that would be his last negotiation for this deal – accept it, or he’s out. After they had fought for a bit, Barbara offered 25%. Neal asked Kevin and Daymond if they would do $75,000 for 35%. They offered $60,000, and Neal went back at them with $70,000. They took it and shook hands. Barbara looked extremely disappointed.

CATE app Now in 2018 – The After Shark Tank Update 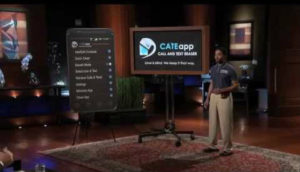 So, where is the so-called cheating app now? After the episode aired on Shark Tank, they got 10,000 new downloads, and most of the new customers were women! CATE app also works for the government, law enforcement, and investors, and Neal pursued those markets. It looks like it did not go far, however. The last update from the company’s Twitter account is from 2013. There are no news articles about it since that time, and the website is down. Seems like even an investment from a Shark couldn’t get this app off the ground.