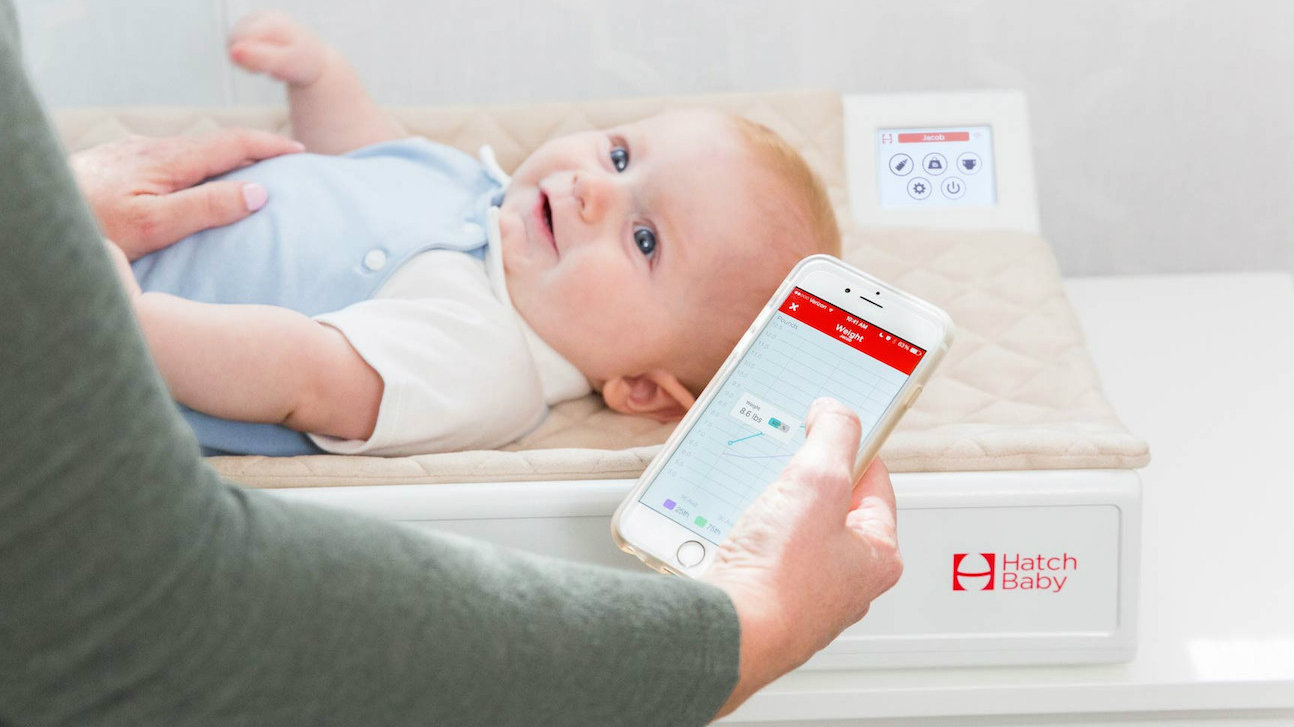 Hatch Baby started when the creator, Ann Weiss, was experiencing anxiety about whether or not her child was a healthy weight, or was eating enough breastmilk. She and her husband created the smart changing pad, and the app to help other parents and their infants who go through similar things. Would the Sharks be charmed by this idea, or would they think it was too complicated? Let’s take a look. 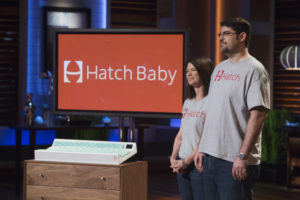 The Hatch Baby segment started off with the audition tape. Ann and Dave introduced themselves and told the camera that they lived in Palo Alto, California with their three kids. Ann stated that the kids were the center of their world and that being a parent is a scary and amazing thing as the video panned over a shot of the family playing basketball in the backyard. Ann described her early days with one of her daughters, and how the daughter was failing to thrive. As a blonde new mother kissed her infant on the tape, Ann said that their mission was to help new parents ease the anxiety of bringing their child home from the hospital.

Ann Weiss and Dave Weiss walked out into the stage, and into the Shark Tank. They were both wearing baby blue Hatch Baby tee-shirts with red lettering. They each introduced themselves, and their business, “Hatch Baby.” They asked for $250,000 in exchange for 2.5% equity in their business. The Shared looked shocked and amused. There will be some jabs at their valuation. But will the Sharks negotiate, or just give up on them?

Ann continued. She stated that bringing a baby home from the hospital is a scary proposition, especially since you can’t be certain that the infant is developing correctly. Dave cut in, stating that an early indicator of baby health is weight gain. Then the baby is weighed when the family visits the pediatrician, but those tend to be months apart. Ann said that their goal is to put parent’s minds at ease with their invention, the smart changing pad. The camera panned to a changing table on the stage. Ann explained that while it looked like a regular changing pad, it has a built-in scale that is wi-fi enabled. This allows a new mother to see how much the baby weighs, as well as “how much you are nursing during a feeding.” That last one surprised me, and I wonder how exactly that works.

The data the table collects syncs to the parent’s smartphone. This allows you to give the information to the infant’s pediatrician. Ann said this leaves “more time for the good stuff,” implying that the device is time-saving in some way. She asked the Sharks who wants to help her help parents stay level, and babies stay on track to healthy development. Ann asked for questions at this point.

Robert said that the product was exciting since there have been very few changes to the baby changing pad since it was invented. But he questioned the need for a new parent to know and keep track of that much information about the child. Ann started delving into her personal experience. She told Robert that when she first became a mom, she prepared for it, but she was still anxious about bringing the infant home. She wanted to breastfeed, but the baby would still cry, and Ann didn’t know why. She said that many other first-time mothers had the same anxieties in the first few weeks. The statistics say that more than two-thirds of parents don’t meet breastfeeding goals because they are worried about the supply of milk.

The Sharks all started talking over each other at this point, asking how the scale was able to track that information. Ann explained that you would change the baby before you nurse. You would press the “feeding button” on the screen connected to the smart changing pad, and it would record a weight. Once you have completed nursing the baby, you bring it back to the scale, weigh the baby again, and it will tell you to have much milk you have provided. The scale is sensitive enough to detect differences in the number of ounces that you feed the baby.

Kevin asked if that was the primary function of the device, to see how much breast milk the infant is consuming. Ann stated that it was more complex than that. It was to reassure a new parent that the baby was developing normally and to make certain that new mothers are meeting breastfeeding goals. Lori asked if the husband and wife pair had sold any units yet. Ann stated that they had not, that it was in pre-production stages. She told the Sharks that they launched their website a week before the filming of the Shark Tank episode, and they were taking pre-orders. Robert looked incredulous, as did Mark. Mark was astounded at their 10 million dollar valuation on a business and a product that had not gotten a dollar in revenue. Ann said that she would love to tell the Sharks why, and Robert flippantly stated that he would love to hear it.

Ann told the Sharks that the pair is experienced executives and entrepreneurs in the baby industry. Ann said that she launched a business that she was able to sell to Johnson and Johnson, which has a division that they called Baby Center. The Baby Center Division was where Ann and Dave had met. The two assisted in product design, marketing, and a host of other things. Chris, an investor in Uber, said that Baby Center is the place for new parent’s to go to find out information about a baby’s fever, or even infant poop color. Robert told the pair that he was sold on the duo’s experience. Ann told the Sharks that she had come to the valuation by going to the investors that funded her last company and easing 1.7 million dollars. They had done this when Hatch Baby was still in the concept phase.

Mark asked the pair why they thought the business would take off. Ann explained that they were confident that parents wanted the product based on their experience at Baby Center. Mark said that he was sure that new parents were looking to track more information than just weight-based data. Ann agreed and said that the future would see an entire smart nursery. Chris stated that they missed an important marketing tool, saying that new parents also experienced an amount of vanity, and the “geeky desire to aggregate all of the data.” Ann smiled and nodded.

Kevin said that he could get his scale to weigh the child before and after. Mark pointed out that there were already Bluetooth scales that connect to an app. Kevin wanted to know how much they were going to see it for versus how much it cost to make. Ann said it cost $89 per unit to make, which they would turn around and sell it retail for $299. Kevin looked amused and leaned back in his chair. Looking nervous, Ann said that other premium baby products are at the same price point. Kevin showed that the average family makes $33,000 a year. He asked if it was sensible to assume that that family can get $250 worth of value from a scale. Ann kind of dodged the question, saying that the baby changing pad would evolve from the basic utility in the same way that strollers had.

Kevin said that they had a lot of credibility in the baby industry, but he was hesitant. He compared them to a famous recording artist that put out an excellent first album and a mediocre follow-up. It was a gamble. Ann said that she disagreed with his premise, but Kevin did not let her finish her sentence. He said that the product Hatch Baby was pushing was essentially a $300 scale, and Dave interrupted him. He said that you could call the FitBit a $100 pedometer, but their initial public offering was a billion dollars. Dave stated that Hatch Baby was backed by the same people.

Ann said that the baby market has shown that new parents were not as concerned with price as they were about their baby, and Mark agreed. She said that people were willing to throw their entire budget out the window for their babies. Robert asked how they were planning on bringing the product to market. Dave said they were started to sell on their website exclusively. Robert asked them to project what they would sell in the first year. Ann said the forecast was 20,000, which is a revenue of six million dollars. Robert told them that their numbers were a little optimistic. Mark stated that he sees the value in the product, but didn’t think they had the follow through. He was the first to go out. Robert told them that past success isn’t the only indicator of future success. He was next to go out.

Lori was up next. She said that while people may like it, she doesn’t think that the problem Hatch Baby is solving is big enough for those people to shell out the money for it. She went out. Kevin said that he doesn’t believe most American parents can afford it, and their valuation was out of control. He went out. Chris stated that he identified with the anxiety of the new father, and he liked the idea of a smart nursery. He didn’t think they planned for the long term. Chris said that he was interested in the other possibilities of the smart nursery, and Dave pressed him to get into Hatch Baby early before they got there. Chris said he loves to get into businesses early, but they hadn’t even sold any product yet. He went out, saying that the prototype was overvalued. Ann took another shot, saying that they would love to be creative with the valuation. Chris stated that he would be in, but at the terms of all the other investors. The three of them hugged.

Hatch Baby Now in 2018 – The After Shark Tank Update 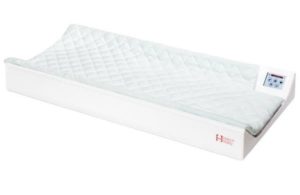 Since appearing on Shark Tank, the Hatch Baby smart changing pad has been reviewed positively by multiple mommy blogs. The women doing the studies identified with creator Ann’s anxiety about their infants not eating enough.

They have created a second generation hatch baby. The new version works the same as the original but has a more sleek design. The company has also released, Hatch Baby Rest, a device used to promote healthy sleep and feeding routines. Consumers are able to set different lights and noises to infant’s routines, such as nap time and feedings.

If you are a brand new parent interested in tracking all of your baby’s stats, you can purchase your own Hatch Baby on their website. They have been featured on Business Insider and the Guardian. According to their Facebook page, there have been 1,000,000 feedings recorded on their app. Hopefully, this product will continue to grow and develop like the babies it supports.