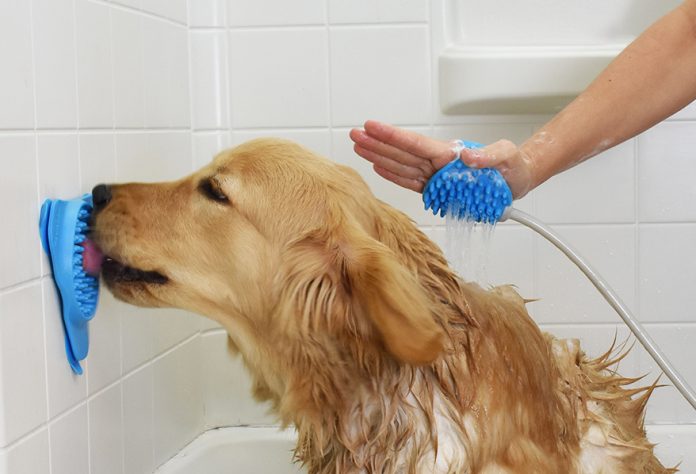 In 2016, while he was studying at Virginia Tech, Daniel Lentz and his co-founder Tom Zipprian concocted a plan to invent the Aquapaw. As an avid dog enthusiast, Lentz understood the battles that some pet owners experience during bath time – pets jumping out of the bathtub, running off, hiding, etc. He believed owners could use a helping hand, without actually having to add another hand. This is where the Aquapaw comes in as a means of making your pets bath time more trouble-free for you and less dreadful for them.
The Aquapaw is a helpful bathing gadget that’s been merged with a dog brush in order to make bathing your pets easier. This product is designed to attach to a shower head or an outdoor hose to allow the water to push through the Aquapaw. While using the product, water is streaming in-between the stubs of the glove to lather the shampoo and water into their fur. 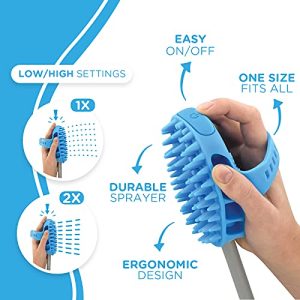 From there, owners simply press the power button, located on the palm of the product, and begin bathing their pet in a petting-like fashion. The petting motion during bathing helps your pets feel more at ease. The Aquapaw can be found on Chewy, Amazon, and the company’s website, along with their Slow Treater – a product designed to keep your pets occupied with treats while in the bath.
Towards the end of 2016, Aquapaw got its first step up into the real world when Lentz and Zipprian profitably raised $42,073 during a Kickstarter campaign. Following closely behind that achievement, in 2017, they began developing, launching, and shipping their official designs for the product. About a year later, in March of 2018, Aquapaw was included in a preeminent trade show known as the Global Pet Expo. During this show, the Aquapaw was awarded the title of “Best in Show”. While being given such a fulfilling title is quite the achievement, Lentz and Zipprian decided they wanted to shoot for yet another triumph – a contract from Shark Tank.

On January 30, 2019, Lentz and Zipprian took the stage on Shark Tank in hopes of receiving an offer of $200,000 for 7.5% of the Aquapaw. After introducing the product to the sharks, Lentz made sure to mention the Kickstarter campaign from 2016. He proceeded to tell the sharks that Aquapaw had made a profit of over $42,000 in a little less than a month, resulting in a wave of excitement from the pet industry. Lentz also added that, after the campaign was concluded, they used any feedback given to expand the company further. 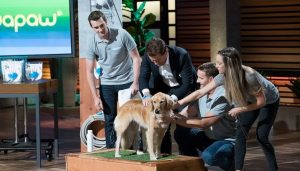 Once Daniel finished his pitch, his crew, as well as Robert Herjavec, demonstrated how to use the Aquapaw before hearing out the sharks offers.
Following the demonstration, Robert Herjavec was the first shark to state his offer on the Aquapaw. Overall, Robert liked the idea due to his love for dogs – he also already had many ongoing investments in other companies within the pet industry. He offered $200,000 for an investment of 25%; however, the offer was not accepted at this time as the other sharks had yet to make their offers.
The next shark to make their offer was Lori Greiner, though she wasn’t too impressed, and she’d stated that she likes it when products are more unique. She was out. Following Greiner, Mark Cuban decided he was out as well due to his disinterest in investing in pet accessories.
Next up were Daymond John and Bethenny Frankel. Like Herjavec, Daymond and Bethenny loved the idea; Daymond claimed that he could help Aquapaw get to retail due to him being invested with the PetCo foundation, while Bethenny made it clear that she was all in as long as her dogs could be the ones on the Aquapaw packages. They both offered $200,000 as well, but for an investment of 30%. In turn, Herjavec heard Bethenny’s offer loud and clear, resulting in him bumping up his investment to 30% as well. 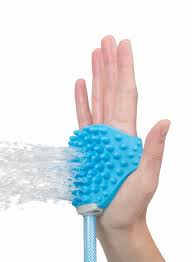 After hearing each of the offers presented by the sharks, Daniel Lentz and Tom Zipprian face Daymond and Bethenny to offer them a slight change in their investment; they, instead, offered $200,000 for a 20% investment in Aquapaw. The first response they received was from Herjavec, backing out of his offer due to the entrepreneurs not including him in their deal. Lentz and Zipprian then focused on Daymond, making the same deal they had just presented, $200,000 for 20%. At this time, Bethenny feels as if she’s been disrespected and left out of the deal, thus leading her to back out as well.
Getting down to the final offer left on the table, Daymond reinstates his initial offer of $200,000 for a 30% investment in Aquapaw; however, Lentz and Zipprian turn down that offer due to the investment percentage being higher than they anticipated. While the two entrepreneurs were in fact offered multiple offers, they did end up leaving Shark Tank without a contract for their product.

Aquapaw Now in 2023 – The After Shark Tank Update

After turning down multiple offers and leaving Shark Tank without a contract in place, the Aquapaw company remains in business and active on most social media platforms as of 2023. Although they do have some competition with close-related pet companies, such as Furtrieve, Otterly Pets, and PetSpy. 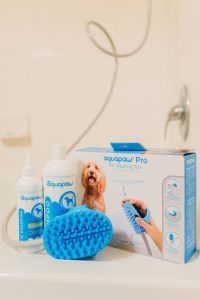 As of February 2023, the Aquapaw can be found on Chewy, Amazon, the Aquapaw company website, and at various pet retailers. In addition to that, the company now sells a Treater Treat Dispenser Mat that can be lathered with peanut butter to keep pets occupied during bath time. The mat has suctions on the back that can stick to the floor or walls of the bathtub.
While the Aquapaw company is still up and running, the entrepreneurs seem to have moved onto bigger and better things. According to his LinkedIn profile, Daniel Lentz was active about a month ago; however, his position as CEO of Aquapaw is shown to have concluded as of December of 2020. As of March 2022, Lentz is now a full-time Staff Industrial Designer for Lime. On the other hand, Tom Zipprian’s LinkedIn profile has not seen any activity for almost a year now. His position as co-founder and director of product for Aquapaw appears to have concluded as of July of 2019. As of June of 2020, Zipprian is now a full-time Platform Lead Engineer at Zero Motorcycles Inc.
Share
Facebook
Twitter
Pinterest
WhatsApp
Previous articleHatch Baby 2023 Update – What Happened After Shark Tank
Next articleWhat Happened to Kari Byron – 2023 News and Updates