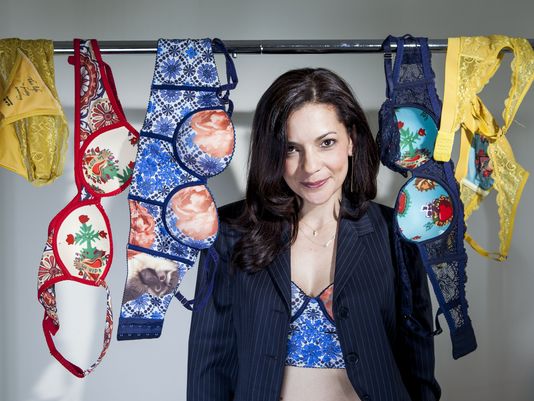 Catalina Gerald, the founder and CEO of Naja (pronounced Nih-Haya), has come to the Shark Tank to seek an investment of $500,000 in exchange for 5% equity in her company. Catalina starts with Naja’s mission statement – she believes it is time for a new lingerie brand. Naja is a product that is better than other brands, and even does good for the world. They have an “Underwear for Hope” program, which helps to train single mothers to sew. These single mothers are then employed for wages by the completed piece. Every time that you purchase a Naja product, you are purchasing a product to help a woman in need.

Naja is helping to disrupt the $14 billion lingerie industry and serve women in need. Catalina then passes out samples to each of the Sharks, and Robert jokes that he won’t try it on. Robert receives the Dog lingerie, Lori receives the Sparrow Collection set, Kevin receives the Koala Bear lingerie, Daymond receives one of the first samples from the new collection that Naja is working on, and Mark receives Rocker Girl Blue, which matches the colors of the Dallas Mavericks. Each set of underwear has a message inside, and Lori points this out – hers says, “I am not weird, I am limited edition.” Robert’s says “Be yourself, everybody else is already taken.”

Naja then explains, most lingerie is actually made for men and marketed for men – Naja is for women, so they put the prints on the interior of the bras and panties since it’s meant for the woman wearing it, not the woman wearing it for the man. Robert then asks about sales, which come out to $145,000 in about 5 and a half months of operation. Kevin asks for examples on how the lingerie is priced, and Catalina says that the bra she is holding sells for $60 and costs $7 to make. The margins are about 72%.

Kevin then asks how Catalina came to the valuation of $10 million dollars, and Catalina explains that the valuation has to do with how much money that the Naja brand has raised in the past. Catalina is from Silicon Valley, where goodwill is a very common thing – they raised $850,000 in a rough valuation, exactly one year ago when Naja was just a single napkin concept. The partner that Catalina had been speaking to over the phone explained that he saw so many lingerie companies that he would most likely say no to Catalina, but they eventually met at a bar over a glass of wine and on her napkin, she drew the prototype on a napkin and showed it to her partner. 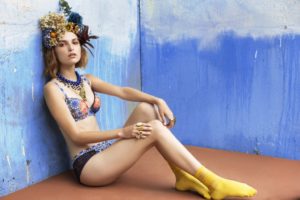 najaSince Catalina has an MBA, she was crafty enough to know how to sell her product that she had just suddenly invented. Mark questions where Catalina received her MBA, which Catalina answers with Stanford University, in Massachusetts. The most important thing that makes the brand is the manufacturing process in which Naja lingerie is made, as they are doing things completely different than anyone else. Lead times for lingerie are over a year, which means that most lingerie is sitting for over a year – Mark tries to point out that this is due to scale of the operation, but Catalina says she disagrees. The lead time has to do with how the products are purchased, so Naja owns their own sampling and manufacturing facility, as well as all the raw materials required to make the lingerie.

Since Naja already has the raw materials, she can develop an entirely new collection of lingerie and have it ready in stores within 4 to 6 months. However, if the demand to reprint an old collection is rising, she can reprint an entire collection within 2 to 3 weeks. Despite this, brand is everything in the lingerie business – Kevin points out that Catalina and Naja do not have a brand yet, and Robert agrees by saying that Catalina is just starting out with her business. People don’t know about Naja, so why would the business be worth $9 to $10 million?

Kevin then questions if he could take $9 million and start his own company, but Catalina denies that Kevin could; she then attempts to tell the Sharks that they are not investing in today’s value of Naja because that isn’t the way that brands work. Kevin points out that the sales are “squat,” and this is what matters to an investor, but Lori calms down Kevin and lets Catalina explain herself. Catalina explains, Naja has doubled their sales from month to month, and no additional money is being spent to scale up operation due to the operating nature of the process and the workers.

Mark then asks about the average order metrics from Naja, which Catalina starts with saying the average order from the website is for around $80. The repeat purchase percentage is around 14%, which Mark says is quite scary, but again, Catalina claims that the 14% metric is actually quite high. A start-up company with unique attachment to people is the time when people should be most excited and most willing to share the product, but there is a re-order percentage of 14% which is quite low. Catalina explains further that with only two collections, the reorder percentage cannot be observed in a total vacuum – there is so much potential for loyalty to Naja to grow. 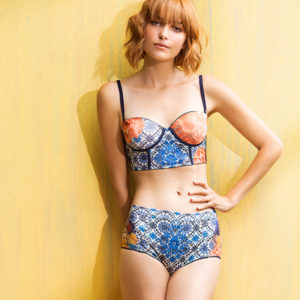 Daymond voices his frustrations; Catalina is correcting the Sharks on what they think and what they know from years of experience. This early in the lifespan of Naja, there should be a far more passionate and emotional response to Naja than just a 14% re-ordering rate, Mark explains, especially since Naja is all based online. There seems to be a disconnect for Catalina and reality, so Mark is out of the deal first.

Robert does not see the value of Naja today, as he feels the company is still growing and is not quite ready for an investor to just steroid the company with a vast amount of cash. Robert is also out of the deal. Kevin then explains that he believes Catalina made a mistake; just because an investor outside of Shark Tank is willing to pay a vast amount of money, it doesn’t mean any of the investors inside Shark Tank would do the same thing. The idea is beyond ridiculous, and to attempt to prove that her business is worth $9 to $10 million is outrageous. Even with an MBA, there has not been enough success to warrant the valuation, and to attract investors, money would have to be made. Kevin values the company at $1.5 to $2 million, and at an investment of $500,000, he would need a premium to own the company. Kevin is out of the deal as well, since Catalina obviously would not take such a low offer.

Lori then voices her thoughts; people from Silicon Valley, the tech breadbasket of America, often come into the Shark Tank and point out that they have raised millions of dollars but are so obsessed with raising money and not using that money as a vehicle to generate more money. The brass tacks of actually selling the product gets lost, and Lori then exits the deal.

Daymond is the final Shark remaining in the deal, and he starts by asking Catalina how she thinks her negotiation style has worked in the Shark Tank. Catalina shows some self-awareness, and responds that the negotiations could have definitely gone better. While Daymond appreciates strong females, and wouldn’t have cared if a male had been pitching in the place of Catalina, the thing that bothered him the most is constantly being corrected by Catalina. It wasn’t the proper way to do business, but Daymond concedes that he may not have seen better designs for lingerie.

Daymond wants to make an offer into Naja, but he has thought enough about it and he feels that there is too much ‘stupid money’ in the business and that he would have to invest massive amounts of money into an improper valuation of the brand. Daymond is the last and final Shark out of the deal, leaving Catalina without an investment in Naja due to her over-evaluation of the brand’s worth.

Naja Lingerie Now in 2018 – The After Shark Tank Update

Naja has been receiving a variety of lukewarm reception lately, boasting only an average review of 3 stars on the review website, Highya. Highya rates a company’s trustworthiness based on its advertising. There are actually no reviews of any women who have worn Naja’s lingerie, and it appears fully that Naja made its Shark Tank appearance solely for the free publicity. I scoured some internet forums and could barely find any discussion of Naja, but the bit I did find was quite an average discussion – nothing good or bad could be definitively gathered about the product.

I truly believe that there is a possibility that Catalina could be quite two-faced with this appearance, and using the humanitarian appeal of employing single mothers to make the products in order to make her brand seem more humane and like it unites behind the idea of feminism. There just seems to be too much of a lack of anything for Naja, which prides itself on being a good cause for women, and “doing good” for the world. But to Naja’s, and Catalina’s, credit, lines and collections are still being created for Naja lingerie.