Before Michael DeSanti started his company Squirrel Boss, he was an aerospace professional. How did he make the switch to squirrel zapping entrepreneur? Michael lives in a rural area of Hawley, Pennsylvania and enjoys watching and feeding the birds that flock near his home. He was getting annoyed by the squirrels that would come to steal their food and decided to get even – but in a humane way. Would the Sharks be will to buy into his vision? 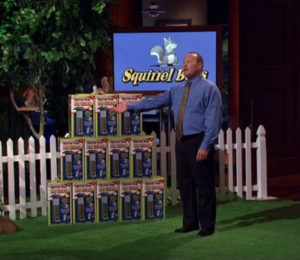 Michael J Desanti walked out on stage and greeted the Sharks. There was a moment of awkward silence before he introduced himself, and told them he was seeking $130,000 in exchange for 40% of his business. He said that he was selling the Squirrel Boss, which is a bird feeder that is supposed to repel squirrels. This seemingly simple statement had the Sharks laughing. Michael called the Squirrel Boss the first interactive squirrel-proof bird feeder. He told the Sharks that he realized that squirrels needed to feed their cute furry faces, but they often eat all the food in the bird feeder if they are able. The Squirrel Boss delivers a harmless static shock to the squirrel when the owner presses a button on the remote. The Sharks cracked up at this.

Michael described the shock as similar to the sensation of walking across a carpet and then touching something. He confirmed that it would not hurt the squirrel, just tingle a little. Michael asked the Sharks, who would like to try the contraption out. Lori said “Woo!”, and Michael invited her up. Robert volunteered himself to zap her and walked up to the stage with Lori. Robert eagerly zapped her, and Lori let out a little scream. Mark said he did not quite see it, and asked them to do it again. Robert told him to come up and try it, and Mark complied. Robert shocked him, and Mark let out a cry of surprise and walked away shaking his fingers. Mark tried to get Daymond and Kevin to go up, but they were having none of it. It was Robert’s turn to be shocked.

Robert gripped the Squirrel Boss, and Mark held the remote behind his back. For an awkward moment nothing happened, and then Robert was shocked. He also walked away, laughing and shaking his fingers. Daymond was the next up, and he also walks away in pain. Kevin flat out refused to take a turn. Robert asked if the zapper only works if someone was there watching, and pressing the remote. Michael said that that was the second biggest objection that he received on the product. The Sharks, naturally, wanted to know what the first was. Michael told them that people said the product was too expensive. He said that was why he was on Shark Tank in the first place.

Lori asked if the squirrels kept coming back if they were shocked. Michael said that the squirrel wouldn’t touch the feeder after one or two shocks. Robert asked if the animal rights activists would be angry about the feeder. Michael stated that animal rights groups did not want the squirrels being killed, so they supported the product. He said that many people illegally and unethically shot the squirrels to death instead. Michael stated that he knew of a squirrel rehabilitator whose job involved nursing baby squirrels back to health. That man said that he liked the bird feeder much more than the alternative, even though he would not personally own one.

Mark asked for details on the business side of Squirrel Boss. Michael said that he had sold $196,000 worth of product, which is about 4000 units. The average wholesale price is $47.47 per unit. Robert asked how much Michael had invested already. Michael told him that he had an Angel investor who put $140,000 into the business. Mark asked him how much he had paid him back, and Michael said that he paid more than ⅔’s back to the investor. He would have paid it all back, but he spent $60,000 for traditional marketing which was ineffective.

Robert asked how much of Michael’s own money he had put into the business. Michael told him he had put in thousands of his dollars, but it didn’t quite reach tens of thousands. Lori asked him if he had a patent on it. Michael told her that his patent attorney was terrible, and his license was denied due to the attorney not being current on patent law. Lori asked if it was rejected because something already existed that was like the product, but Michael denied that that was the case. Lori noticed something on the packaging. It said As Seen on TV, which she questioned Michael on. He told her that news crews came to his house, which Lori said was not the same thing as a “real As Seen on TV.”

Robert told him that he thought it was a quirky product that he could make a little money on, but could not turn into a long-term business. He said that Michael was right for inventing it, but he did not want to get zapped again. He went out. Michael thanked him but disagreed. He told the remaining Sharks that the Squirrel Boss was a bird feeder that paid for it’self with the amount of money you save on bird’s seed that would mostly be going to the squirrels. He told them that it was saving the lives of millions of squirrels and that it was “fun every time.”

Lori said that zapping a squirrel was a little too sadistic for her. She was the next to go out. Michael told the Sharks that he could not leave without a deal. Mark said that the Squirrel Boss was not a product he could put his heart into. He told Michael he wasn’t a squirrel whisperer, and he went out. Only two Sharks remained. Michael said he was sorry to hear that. Kevin was the next to go out, make a pun about being shocked on the way. Daymond didn’t give Michael any false hope; he immediately went out after them. He did not even give him a reason.

Michael stood there for a second and then told the Sharks that he was refusing to leave. Kevin told Michael to put his hand on the Squirrel Boss, and give the remote to him – he could get him to move real quick. The other Sharks laughed. Michael left, looking very embarrassed. Robert said he thought the squirrels got on the contraption and would just let go in shock when it was zapped. Kevin told him that you could hold a nut in front of the squirrel after it was zapped, and it would have no idea what it was looking at because it would be so confused. IN his exit interview, Michael told the audience that he “really, really, really” wanted one of the Sharks as his partner because he liked all of them in his way- even Mr. Wonderful.

Squirrel Boss Now in 2018 – The After Shark Tank Update 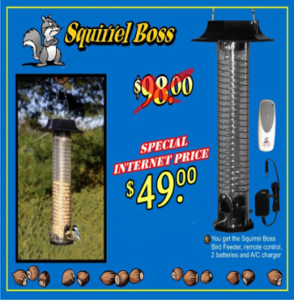 You can visit Squirrel Boss on their website,  as well as on their Twitter and Facebook pages.  The Social media sites are sparsely updated in monthly intervals. People on Amazon seem less than thrilled with their purchases. A common theme running through the reviews seems to be the functioning of the bird feeder. Sometimes it doesn’t work at all, or the squirrels have figured out a way of bypassing the system. Perhaps the Sharks were right not to bite on this particular product.