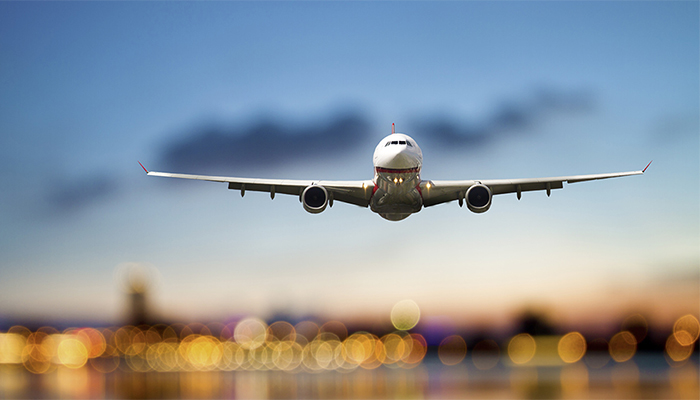 Most of us like to travel and visit other countriesーsure, sitting strapped in a not-so-comfortable seat for multiple hours at a time isn’t the definition for fun but the destination makes it worth it right? Mankind sure has come a long way since the Wright brothers first built the flying airplane in 1903, just think about itー there are thousands of aircrafts up in the air at any given timeーquite amazing, if you ask me! But while the existence of commercial airplanes is a breathtaking fact in itself, we can’t underestimate the grounds and tracks needed for them to be able to successfully fly and land every day. Airports!

By definition, an airport is a complex network of runways and buildings necessary for an aircraft’s take-off, landing and maintenance; it also contains the facilities required for passengers to safely board the plane. In other wordsーwe wouldn’t be able to travel to the Bahamas without the proper airport facilities. Airplanes are different from cars; at their breakneck travel speeds, they require thousands of feet of runway in order to stop safely. Here’s an interesting fact, the longest commercial runway in the world is over 18,000 feet longーthat’s over 3 miles!

In addition to providing the proper environment for aircraft flying, airports also offer facilities needed for safe  and proper air travelーflight check-in services, luggage drop-off/pick-up services, customs and immigration offices, to name a few. We also can’t forget about air traffic control; for those you who may be unfamiliar with it, it’s a tall, windowed tower located on the grounds of the airport. The air traffic control officers in the tower use radars and other advanced pieces of equipment in order to provide vital information to flight pilotsーthey monitor and ensure that the aircraft is traveling safely by making sure that each airplane travels in an unoccupied air space, in order to prevent in-air collisions. In simpler terms, air traffic control is one of the main reasons why hundreds of thousands of passengers are able to fly in the air and reach their destination safely. 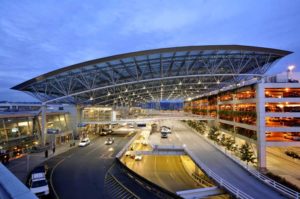 Should we really be surprised that USA is at the top of our list? Probably not. Considering the fact that the country has some of the greatest air travel volume in the world, it really should not come to us as a big surprise that they are also the ones with the greatest amount of airports. To put things into perspective, there are at least 87,000 airplanes in the skies of America on any given dayーeven if we were to disregard the flights bounded for other countries, surely that’s still a large number to accommodate for on American soil. Currently, the largest airport in the United States is the Denver International Airport, at an astonishing size of 13726 haーit also sees over 31,000,000 passengers every year!

The gap between the first and the second ranking countries seems to be quite largeーa whopping difference over over 10,000 airports! But for some, it may still be surprising to know that a developing country ranks second on the list of having the most airports. However while Brazil has a large amount of airports, their infrastructure has been said to be lacking compared to other countries. For example, access to the airports can be difficultーpublic transportation such as subways, do not reach them; their airport capacity is also significantly lower than that of first world countries such as the United States. The busiest airport in Brazil, according to passenger traffic is currently the Guarulhos International Airport located in the city of Sao Pauloーwith over 39,500,000 passengers a year! 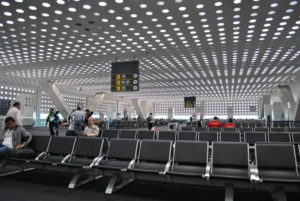 Continuing on with the decreasing pattern, the third country on our list has less than half the amount of airports as the second. With over 1700 airports, Mexico currently ranks third in the world for having the most airportsーit also ranks second for having the most in North America, behind the United States. As the second most populated country on the continent, thousands of airplanes take-off and land at the Mexican airports every day. According to air passenger traffic, Mexico City International Airport, located in Venustiano, Carranza, is the country’s most busiest airport; the facilities typically see over 100,000 passengers go through the airport gates every day. The passenger traffic also appears to be on an increasing trend; last year, over 38,400,000 passengers traveled through the airportーa stunning increase of 12% compared to that of 2014!

As the largest country in North America by land mass, Canada currently ranks fourth in the world for having the most airportsーonly less than 300 compared to that of Mexico. Known for its beautiful, breathtaking nature and scenery, the country attracts millions of tourist from all over the world every year; popular destination spots include Toronto, Vancouver, Ontario and Calgary. Statistically speaking, Canada saw over 27 million international visitors in 2015, with over 22 million of them being from their red and blue neighbour down south. The largest airport in the country is currently the Vancouver International Airportーhaving been dubbed as one of the best air travel facilities in the world, the airport also ranks second in terms of passenger traffic in Canada. The airport has also won numerous international awards including numerous Skytrax Awards for being the “Best North American Airport”. 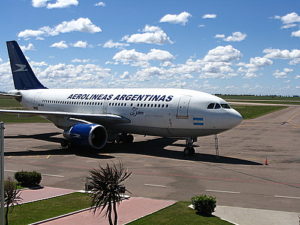 With just over 1200 airports, Russia, the largest country in the world ranks fifth on our list. As one of the world’s most popular tourist destinations, Russia has seen a rapid growth in tourism since the late Soviet period. Some of the country’s most famous attractions include the Saint Basil’s Cathedralーa historic structure built in the 1500’s and the Hermitage Museumーa massive museum for arts and culture located in Saint Petersburg. Considering this, it’s no surprise that Russia saw over 27 million international visitors in 2013. The busiest airport in the world’s largest nation is currently the Sheremetyevo International Airport located in Moscowーit saw over 31,000,000 passengers in 2015, a statistic comparable to that of the number one ranking, United States!

Located in the southern tips of South America, Argentina currently ranks sixth in the world with a little over 1100 airports. Known for its cultural heritage and beautiful landscapes, the country receives massive numbers of international travellers every year; the most popular tourist attractions being sites found in the historic city core. According to the World Tourism Organization, the country saw close to six million tourists in 2011. Located in Greater Buenos Aires, the capital city of Argentina, the Ministro Pistarini International Airport is the largest and busiest in the country, handling close to 85% of Argentina’s international air traffic. In 2007, the 3475 ha airport was also voted to be the “Best Airport in the Region” in a Skytrax survey. 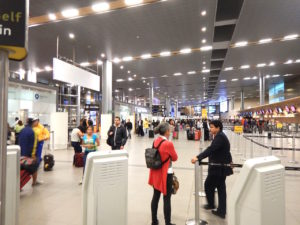 Just shy from a thousand airports, the South American country of Columbia ranks seventh with 992 Airports. As a fascinating country with bounds of cultural and historical heritage, interestingly enough one of the things which Columbia is best known for is, their coffee (Who hasn’t heard about the softness that is Colombian coffee?). With more than 200 direct flights connecting the country with the rest of the world, the number is only expected to rise as more and more tourist choose Columbia as their vacation destination. In 2015, over 2.5 million international visitors traveled to the countryーa stunning increase of 12% compared to the previous year. The largest airport in Columbia is currently the El Dorado International Airport in Bogotaーwith over 20 million air passengers a year!

With a little over 950 airports, Bolivia has always been fighting for the number seven spot alongside Columbia (who currently holds the seventh spot). Located between Peru and Paraguay, Bolivia is one of the many South American countries on the list for having the most airports. Known for their diverse culture, history and geographic regions, the country sees thousands of visitors from all around the world every year; in fact, Bolivia also has six World Heritages, as declared by the UNESCO. In 2013, the country saw the most travellers from Brazil and Chileーwith American visitors ranking third. The largest airport in Bolivia is the Viru Viru International Airport, it received over 1.7 million visitors back in 2013.

Located between Argentina, Bolivia and Brazil, the landlocked country of Paraguay is home to approximately 800 airports and currently ranks ninthーit is also the fourth South American country to make the list. While Paraguay has been one of the least visited nations of the continent in the past, the numbers have slowly been climbing back up since 2014; it receives the most passenger traffic from Argentina, which is not a surprising fact considering how the two countries are neighbours! Over 640,000 international visitors arrived to Paraguay in 2014, with close to 20,000 of them being American travellers. The Silvio Pettirossi International Airport, located in the city of Luque, is the country’s largest and main international gateway. In 2015, the airport saw over 910,000 air passengers cross its gatesーa figure which has decreased slightly compared to the previous years. 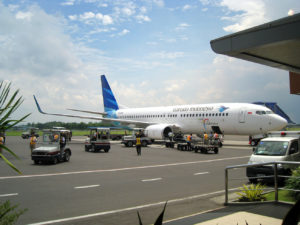 With a little under 700 airports, Indonesia is the only Asian country to make it on the list (if you don’t count Russia, which borders between Asia and Europe)ーa fact which may be surprising considering the staggering amounts of travellers to Asia every year. The country itself in actuality is also quite small compared to its Asian neighbours, with an area of 1.9 million km^2. Known for its natural sites such as its beaches and volcanos, the archipelagic island country attracts thousands of travellers from all around the world every year; in 2015, over 10,000,000 visitors travelled to the countryーthe most being from the countries of Singapore, China and Malaysia. According to the number of passenger traffic, the Soekarno-Hatta International Airport located in the country’s capital of Jakarta, ranks first as the busiest airport in the nation. Named after the first president of the country, the airport has a stunning capacity of close to 38 million passengers; in 2014, it was also ranked the eighth busiest in the world. In 2013, the airport saw close to 60,000,00 passengers travel via its doors.