Before appearing on Shark Tank, Arthur Shmulevsky, and Ryan Agran teamed up to provide an automatic doorman service to NYC residents. They got the Clean Cube into 40 different apartment buildings and achieved $150,000 from their landlords. Would the real estate savvy Sharks see the value in such a service? Let’s take a look. 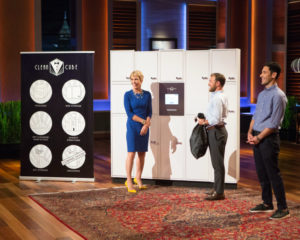 Arthur and Ryan walked out on stage, and into the Shark Tank. They asked for $300,000 in exchange for 10% of their business, Clean Cube. Arthur started off by telling the Sharks that we live in a world of convenience, with people ordering many necessary supplies online, or “getting clothes laundered with a simple phone app.” Arthur continued, saying that the one snag in that process is the actual delivery of the items. A package could be stolen from the doorstep, or you may be required to sit home and wait for a package if a signature is required. Arthur said that a Clean Cube could eliminate all of those problems by being a virtual doorman, or a link between service providers and consumers. The Sharks watched the presentation stone-faced, not looking impressed.

Ryan gestured towards the block of white locker-looking cubes on the stage and said that it was a replica of an installation that they currently had in NYC. He invited Barbara to come up and demonstrate the technology to the other Sharks. They thanked her for coming up and said that they knew that she was a New Yorker with a doorman. Arthur told her that once she registered with Clean Cube, she would receive a passcode. He handed her “dry cleaning” to drop off and asked her to enter her passcode. Arthur walked her through putting in the passcode, which she did on the touch screen, and she hit another button for the dry cleaning. The screen showed her which cubes were available to fill. She pressed one of the free cubes on the screen, and the cube popped open. She placed the clothing inside and closed the door. Barbara said that the process was “not bad.”

Arthur told Barbara that she also had a pickup. She pressed the pick-up button, and the touch screen showed her what the pickup was, and which cube it was in. It was a small brown box, which Arthur said was what she “ordered for Mark.” Barbara threw the package to the floor as everyone laughed. Ryan picked it up, and tried to hand it to Barbara, but she refused to take it, saying that she would not carry his stuff. Ryan brought the package to Mark, and Mark thanked him. Barbara asked them what was in the package as Mark pulled out a “trillionaire hat,” which had four commas on it. Mark balanced the boxes on his lap and made an attempt to put the hat on, before placing it right back down.

Arthur said that Clean Cube is already established in NYC, they just need the Sharks help to bring the concept to other large cities. Mark wanted to know how they marketed the idea to the businesses that were giving Clean Cube space. Arthur stated that they were in 40 locations in NYC. All of those buildings were residential, with the largest being 168 units. Mark clarified that all these apartment buildings did not have doormen, but wanted doorman-style services. Arthur confirmed that that was the case. Robert asked how many cubes they provided.

Arthur said that Clean Cube was “modular and Lego-like,” so the amount could be adapted to space. Kevin asked how many cubes they would need per hundred tenants since scarcity could be an issue if everyone were using them. Kevin said that if there were Clean Cubes in his building, and he found them all to be full after he dragged his laundry down from the top floor, he would personally find the creators. Arthur and Ryan laughed uncomfortably. Arthur said that they were averaging seven apartments per cube. Mark asked what the cost looked like for the cubes.

Arthur told him that the installation costs were around $3,000. Kevin wondered how they made money from the landlord, and Arthur explained that the last three installations, the owner paid $7,000 per installation. Robert asked why the landlords would do that, and Arthur explained that they wanted to fill the dead space in their apartment units. They could attract more tenants by giving them amenities such as Clean Cube, without having to pay a doorman. Robert addressed Barbara if she would pay $7,000 for this service in one of her buildings. Barbara said that she got the concept – it could attract more people to primary apartments that did not have a lot going for them. Arthur stated that it’s not just a way to make apartments more attractive, they also want to put them around in neighborhoods, like in Starbucks or gyms. Robert asked them who would pay for that service, and Arthur told him that they would charge a $10 access fee to the consumer.

Robert asked them what their sales were. Arthur explained that they weren’t currently charging a subscription fee, so any money they made was from the installations. Ryan said they’ve made $150,000 in the last year, with the bulk of that money coming in over the last three months. Robert asked how many people are using the service, and Arthur said that there were 552 at the moment. Robert stated that he loved the idea, and knew that the world was going to instant deliveries. He did say that he was not a fan of the footprint, and use of physical space. He stated that he did not see it working, and he went out.

Kevin went up next, saying that whenever he was considering a new investment, he tried to figure out if any roadblocks would stop the business from growing. He stated that every negotiation for space for Clean Cube would be a long, drawn-out negotiation. He said that it would be a huge pain in the rear end, and he hated rear-end pain. He went out. Lori stated that she knows that there is a big problem with the business. They were still at the beginning stages of learning how to monetize it. She didn’t know how she would make it work, so she went out.

Mark said that it seemed like they would be in a constant struggle between the technology, and the services that they would be able to offer. Mark stated that he didn’t see anything proprietary in it, and thought a larger company would just come in and steal their idea. He went out. Barbara said that she was the last Shark standing. She continued, saying that they only really had a good business for one application – she did not see the subscription service working. But Barbara could see the value in Clean Cube for people living in NYC, or other large cities, for individuals who do not have a doorman. She said that there was a sweet spot in between the two extremes of buildings with over 100 units that already had doormen, and buildings with eight units that would not have space for Clean Cube.

She said that buildings with 50-80 units were the perfect market for Clean Cube since they could get more for the rent that they charge if they have that service available. Barbara said that it was too niche and that it would not make a lot of money. She stated that she was not excited about it, so she went out. Arthur and Ryan thanked her as they left the stage. Ryan said that they’d been looking for partnerships specifically with Mark or Barbara, but they would be able to make it on their own. Let’s take a look at how they do.

Clean Cube Now in 2018 – The After Shark Tank Update 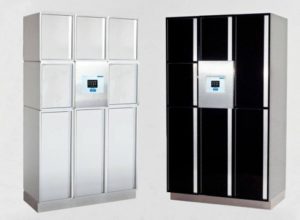 The website for Clean Cube is still up and running. It seems like the service is alive and well in NYC. Their social media sites are lacking updates. However – the Twitter account has not been touched since early February, and their Facebook hasn’t gotten an update since April. The entrepreneurs behind Clean Cube gave presentations at the NYC RETech Expo in April, but it seems like they have not been heard from since.