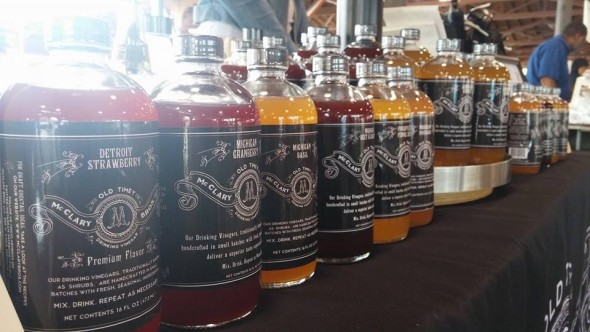 Stepping into the Shark Tank is one young Jess Sanchez-McClary. Jess is the founder and owner of McClary Bros Drinking Vinegar, and is seeking a $100,000 investment in exchange for a 15% equity stake in the company. Typical drink-mixers are loaded with artificial flavors, colors, and preservatives, but back in the 1700s, this was not the case. People back then missed drinks with drinking vinegars called “shrubs,” and these colonial mixers are perfect for people who are looking for a natural alternative to traditional sodas, or people who just want to try something new. Jess is bringing back these shrubs into the 21st century.

McClary Bros Drinking Vinegars are made with organic, unpasteurized apple cider vinegar and only all-natural ingredients. The vinegars liven up the drinks and excite the consumer, introducing them to a whole new mix of refreshing flavor experiences that will change the way they think of that age-old staple, and how they view preservatives. Of course, Jess asks who among the Sharks are thirsty, and Kevin is the first to say, “Hit me.” An old-timey bartender with a very strong moustache passes out a sample platter to each Shark, including guest-shark Ashton Kutcher.

As the Sharks cheers and slam back the drink, Jess explains; the orange concoction the Shark started with is called “Bay Leaf Vinegar” and includes gin inside of it. Mark flicks his tongue after taking a sip and mentions, “not enough gin.” The drink has a variety of citrus for the under-tones, as well. Robert mentions, “alcohol!” and sets his glass down on the table. Mark takes a moment to point out that Robert actually slammed the drink down and probably did not even taste it.

However, Robert loved it, and he asks for the next flavor. That flavor is actually apple pie with bourbon, Jess explains. Kevin and Lori both take a sip of the drink on camera, but only Lori mentions that the drink is very good. The apple pie with bourbon is the staple of McClary Bros Drinking Vinegar, and is also the bestseller. Jess then passes out a bottle of pineapple and lentil seed flavor upon Mark’s request to inspect the packaging. All of the packaging is the same, Lori asks, and Ashton Kutcher fearlessly takes a huge gulp straight from the glass bottle. His face says it all; the straight concoction of vinegar appears to be very, very gross. 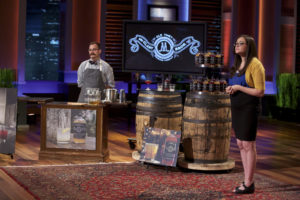 Upon seeing both Robert and Ashton gag and make faces upon tasting the juice, Lori points out that the apple cider vinegar is actually very, very good for you. Ashton then asks about the story behind McClary Bros Drinking Vinegar, since it features brothers and Jess is… well, a woman. Jess explains that when she started the McClary Bros company, she was actually in culinary school. She learned of the vinegar preservation technique back then and fell in love with it, since back then they had very simple ingredients and no artificial ingredients or preservatives – after all, the main ingredient is vinegar. Kevin points out that the preservative is vinegar instead of artificial preservatives, which Jess agrees with.

However, Kevin then feels that America is not ready for “vinegar right up the nose,” but Ashton disagrees. Vinegar is drank all over the United States for different reasons and with different flavors, but Kevin, like a child, mentions “I hate all those, too.” Ashton then points out that Kevin is not the only palette, and Kevin continues on to ask for sales. Kevin points out that although he personally does not like the product, sales can prove him wrong. Jess explains the sales situation; the McClary Bros Drinking Vinegar company has been in operation since 2012 (this episode was filmed in 2014 or 2015), and so far, they have more than $305,000 in sales.

Mark then explains that his wife drinks vinegar every day, and Jess says that she does as well. Lori steps in to say that she also drinks vinegar daily, and Mark then asks what the health benefit is for drinking vinegar daily. Jess explains that vinegar can help reduce cholesterol levels and can help to keep blood sugar levels from spiking after a meal. Ashton then asks how Jess is marketing the product; is it being marketed as a mixer, or a straight beverage? Jess says that in the way they attempt to market it, it is primarily a mixer, although there are people that are drinking it straight as an all-natural alternative to sodas.
Mark then asks how Jess intends to grow the sales, and Jess says that they have just started to move into some restaurant chains that are looking to grab that high-end customer who will purchase the expensive drinking vinegars. As the “craft cocktails, which is what alcohol with the McClary Bros Drinking Vinegar could be considered, become cooler and more mainstream, restaurants are looking to find a way to smooth over existing margins and increase their profit. Mark likes this strategy, and adds his own thoughts; the plan is brilliant since it will add a unique flavor to places in the form of the drinking vinegars. This means that the person might leave with a taste in their mouth for more, since they just had an experience they cannot get anywhere else. Jess is attempting to be the go-to brand for high-margin soda alternatives. 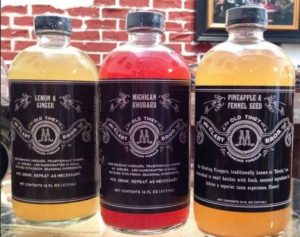 evin then asks about the industry behind the drinking vinegars – exactly how large is it? Mark estimates maybe $10 million at the most, which is low, but Ashton explains that if the product breaks outside the drinking vinegar market, it can be sold as a high-end mixer. In order for Jess to grow the product, she will need to grow her number of customers. Kevin says that he is not a fan of this, but Jess continues on. Attempting to move into the mixers section was exciting because bartenders love whenever there is something new to “play” with.
However, Lori says that she unfortunately does not drink hard liquor so she could not help in that area, but she is a self-appointed expert in the effects of unpasteurized vinegar. Lori explains that she would attempt to see, if she were Jess, about doing some sort of independent lab testing to see if there are any positive effects to mixing the vinegars with alcohol – possibly a calmer stomach experience or better digestion, Lori muses. Unfortunately, this will be further down the road for Jess and the McClary Bros Drinking Vinegar company, and Lori is the first Shark out.

Robert explains that Jess is at the “absolute crux” of a dilemma in terms of risk. This is one of the reasons many people do not start a business, Robert claims. The big question now is should Jess take a business that is putting food on her table and risk it in order to grow into something much wider? There is too much money and too much risk for Robert, as he does not see a clear way for the money invested in the Shark Tank to help out Jess and grow the business. Robert is the second Shark out.
Mark mentions that the brand is great and it has a great look – Jess owns the niche, and is profitable. If she begins to gain more momentum and gain more market share, she can grow the business into a substantial business. However, Mark is just not a fan of vinegar drinks, unlike his wife, so Mark is also out.

Kevin says that he looks at the drink and says to himself, “not everybody loves vinegar.” This immediately diminishes Kevin’s interest in the product, but Jess has a passion about her that Kevin loves. Kevin continues on and explains that Jess is going to have to go forth and reinvent the entire industry and start selling people on the product, which is essentially pioneering a new industry and paving the way. But what happened to the pioneers? They received a lot of arrows in their back because not only would Jess have the problems behind her, but problems moving forward.

Ashton steps up for Jess and explains that Kevin is belittling her, and this is not okay. However, Kevin feels that he is not belittling her and is instead giving answers and continues to argue with Ashton, who points out that Kevin is being “uncool.” The argument descends into a billionaire peeing contest and everything comes to a head when Kevin says that Ashton will not write a check, but Ashton silences Kevin with a finger.

McClary Bros Drinking Vinegar has beautiful packaging and is a great product, but Jess is limiting herself by staying in the vinegar space. Ashton recommends that she take a step back and maybe look for other industries to bring the drinking vinegars to. Unfortunately, it is just too early for Ashton to invest and find a way to realistically get his money back, so Ashton is the last Shark out of the deal.

Unfortunately, Jess does not find an investment in the McClary Bros Drinking Vinegar company, and leaves the Shark Tank with a heavy heart.

Since Jess’s appearance on Shark Tank, McClary Bros Drinking Vinegars have been doing incredibly well for itself. Not only have new flavors been invented, but Jess is returning a lot of love to her hometown of Detroit, Michigan. The McClary Bros Drinking Vinegars now feature a physical storefront, including a tasting room, in Farmington, Michigan. In addition, Jess has grown the selection of flavors to include additional shrubs and even recipes which can be found at the bottom left corner of the webpage.

McClary Bros Drinking Vinegar is available online and in the physical store, and each bottle of drinking vinegar ranges from around $17 to $25. Of course, there is also a Shark Tank special which includes 3 bottles of your own decided flavors, all for the lowered price of only $45. There is also an extremist selection available, which includes all 7 of the drinking vinegar flavors for the price of $100. McClary Bros Drinking Vinegars also include a rewards programs for those who frequently reorder on the website. So far, the only flavor to sell out is the Detroit Strawberry, which is a community-grown flavor and near-and-dear to Jess’s own home.