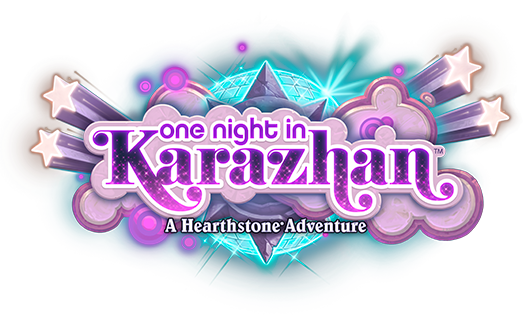 So, Week 3 of One Night in Karazhan has just been released, taking us into the Opera. And contrary to the public opinion, the “portal cards” that have been announced and showcased really are not that powerful. With that said, what are some of the more powerful deck combinations utilising these new cards? After some research, I compiled a little list consisting of the top three decks that seem to be running rampant on the ranked matchmaking board.

Ugh, this deck is still here. But that’s okay because this is a super, super low cost deck that is incredibly efficient. The Aggro shaman is a deck with an ability to outplay other early-game aggressive decks due to the power of the Overload mechanic, which allows you to play a slightly more powerful card at the cost of a “locked” mana crystal the following turn. The win condition for the aggro Shaman is to grab control of the board early, and use one of their combinations to take out the game.

The addition of Maelstrom Portal for aggro shamans has allowed them to deal even more damage to enemy minions while taking control of the board, which is fantastic for the early throes of a Hearthstone game. While the wing has not necessarily added a whole lot of things to the aggro Shaman’s kit, they have added some cards that allows for the refining of a deck into your more personal flavor – you can choose to go more physical with the combination of Doomhammer and Windfury Weapon to gain yourself 10 total damage on one turn or pull out a 4-cost Flamewreathed Faceless, or you can pull out the spells to bypass any minions that might be on the board.

For aggro Shamans, the decklist has remained the same – your Doomhammer, Flamewreathed Faceless and Thing from Below are your top-end cards that are meant to serve as the “shock troops” and work to end you the game, while cards like Tuskarr Totemic, Sir Finley Mrrgglton, the new Maelstrom portal, and Feral Spirit allow you to dominate the entirety of the early game.

This is brand new to the addition, and is a very welcome change – thanks to the introduction of some interesting cards that relate to card draw in One Night in Karazhan, Token Druids have become relevant. Token meaning, a small “weenie” card that is summoned when a condition is met – tokens are not actually placed in your deck.

Token Druids are a relatively balanced deck with a healthy range of card costs, starting with the 0-mana Innervate and rising up all the way to the new 12-cost Arcane Giant. The entire idea of the Token Druid is to play cards which allow you to summon in additional monsters for little mana, while also supplementing the Druid with spells like Swipe and Wrath to maintain board control and avoid any direct damage to the minions. Of course, Emperor Thaurissan is incredibly important to this deck but will be going away soon, so this deck can easily drop off in popularity and may not remain competitive for long.

For Token Druids, a variety of legendaries can prove extremely helpful, and stocking your deck with Yogg-Saron, Hope’s End can allow you to throw out some tricky spells. Thanks to spells like Nourish, Swipe, Wrath and Mulch, you can hurl out some nasty spells while retaining the Druid’s infamous level of card draw and burn through your deck. Azure Drakes are also helpful, which will increase the strength of your spells while also giving you a little bit more card draw. In addition, the new Fandral Staghelm card is a great boon since it will effectively double your card draw and your damage at the same time.

My personal favorite and an all-around good deck, the Dragon Warrior relies on the use of dragon synergy cards to buff minions and maintain deck control while also using a small selection of spells and weapons to bypass minions and directly damage the enemy player’s character. The Dragon Warrior prefers to play a tempo-paced game, and will either be forced to set the pace of the game early on with some huge aggressive threats or play a more reactionary style.

Dragon cards have some of the best synergy in the game, and this can be seen in a few warrior-exclusive cards like Alexstraza’s Champion, which allows for you to drop a 3 attack and 3 health minion on turn 2 which includes charge – the drawback is that you will be forced to have a dragon in your hand when you play this card, which means you will have to sacrifice your early-game for later game unless you get terribly lucky with card draw. The Dragon Warrior has not changed much from the time before One Night in Karazhan, although the new Fool’s Bane card can prove incredibly deadly when combined with two Upgrade! Cards.

The Dragon Warrior includes, you guessed it, a staple of dragons – legendaries like Deathwing (both of them!) and Onyxia are critical, while the oriented legendaries such as Grommash Hellscream and Malkorok will make you much more of a threat. The customization of the Dragon Warrior is quite open-ended, and you can choose to include a selection of cards to your liking – I personally have a few Rampage cards in mine, which allows me to use a Slam on my own minion for card draw and then I can buff him to give him damage as well as regain the health from the spell I used on him.