What Happened to Slash- News & Updates 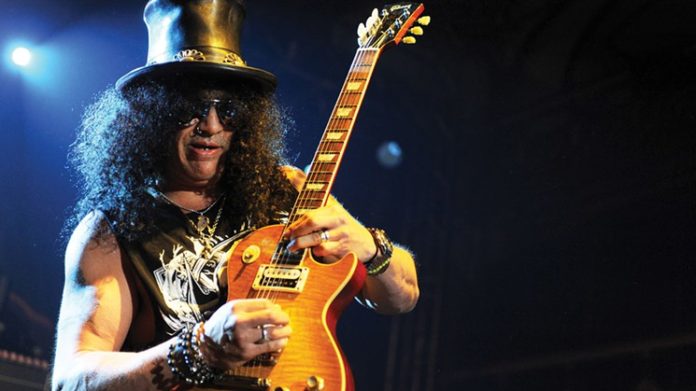 Slash is a British musician best known for being the lead guitarist of the rock band, Guns N’ Roses. Nicknamed “Slash” by a family friend due to his habit of “always being in motion” as a kid, he first learnt how to play the guitar when he was fourteen years old; enthralled with the idea of playing music, it wasn’t uncommon for him to spend up to twelve hours a days practicing the stringed instrument. In his early adulthood, Slash joined a band called Tidus Sloan however the stint did not last long; from there, he eventually joined a series of other bands over the next few years, one of which was Hollywood Roseーit was when he was part of that group that he met Stradlin and Rose. The two later went on to invite the guitarist into their new rock band, Guns N’ Roses. Quickly becoming close friends, they began to write several songs and soon landed a recording deal with Geffen Records in the mid 80’s.

A year after their conception, the Los Angeles based rock band released their studio album entitled Appetite for Destruction in July 1987. A best-seller, the album was monumental in the band’s almost immediate rise in popularity. Since then, Guns N’ Roses has released five more full-length albums, eighteen singles and over twenty music videos. One of the best-selling rock bands in the world, the group has won numerous awards and titles throughout their time together including four American Music Awards, four MTV Video Music Awards, two World Music Awards. A three time Grammy Award nominee, Guns N’ Roses has sold over 45,000,000 records in the United States alone. A critically acclaimed guitarist, Slash himself has also received much recognition for his work in music; not only has he been presented with a star on the prestigious Rock Walk of Fame, but he has also been given the title of being one of “The 100 Greatest Guitarist of All Time” by Rolling Stone.

While most people know him as the prodigy guitarist, Slash has also worked briefly on-and-off as an actor. The rock musician made his first appearance on television in the 1994 television series, Tales form the Crypt at the age of twenty nine. Some of his other projects in front of the camera include The Drew Carey Show (1998), Velvet Revolver’s Rock & Roll Revolution (2006), Osbournes Reloaded (2009), Metalocalypse (2009) and Anger Management (2013), to name a few. In 2009, he even starred as a guest mentor on the Fox singing competition series, American Idol.

So what has the famed guitarist been up to since then? What kind of projects have he been working on as of late? What happened to Slash? Where is he now in 2018? 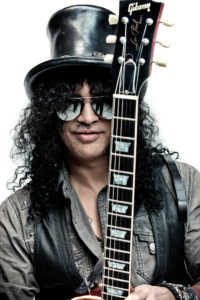 Born on July 23, 1965 in Hampstead, London, Slash (Real name: Saul Hudson) is the son of Anthony Hudson, a caucasian artist and Ola J. Hudson, an African American costume designer; he has a younger brother named Albion. As a young boy in the late 60’s and early 70’s, Slash was taken care of by his father and paternal grandparents in the city of Stoke-on-Trent, as his mother had relocated to Los Angeles due to her work. When he was five years old, Slash was reunited with her in LA together with his father. However the happy family life did not last longーhis parents eventually split up in 1974 when he was nine. Following their separation, Slash lived with his mother however was often sent to be with his maternal grandparents due to the constant traveling nature of her work. Occasionally, he also went with her to workーit was around this time that he received the nickname of “Slash” by Seymour Cassel, an American actor whom he had met at his mother’s workplace.

His musical interests didn’t begin to surface until his early teens. When he was fourteen, he came up with the idea of forming a band with a friend; although the actual band never materialized, it prompted him to take up the guitar. Using a one-string guitar given to him by his grandparents, he soon enrolled in music classes at the Fairfax Music School with instructor, Robert Wolin. Devoting himself entirely to the instrument, Slash practiced tirelessly every day, sometimes for a period of up to twelve hours. After performing with a string of different bands throughout the early 80’s, he joined the rock band Guns N’ Roses after being invited by Izzy Stradlin and Axl Roseーtwo former bandmates. Writing their own tracks, they performed at a number of local nightclubs including The Roxy, The Troubadour and Whisky a Go Go. Eventually being scouted, they landed a recording deal with Geffen Records in the spring of 1986. 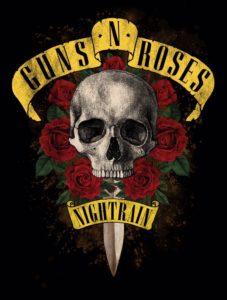 In July 1987, Slash along with the rest of his Guns N’ Roses bandmates released their first studio album entitled, Appetite for Destruction. Although the album initially debuted at a disappointing number 182 on the US billboard 200 Chart, it soon became a huge commercial hit, having spent four weeks at the top of the chart. Not only did it see success in the American charts, but it also ranked amongst the top ten in six other countries including Australia, Canada, New Zealand and Switzerland. Praised for its “unique mix of rock values”, Appetite for Destruction soon became one of the best-selling debut albums of all time in the United States, according to Billboard. Universally acclaimed, it track list saw twelve songs including Welcome to the Jungle, It’s So Easy, Paradise City, Sweet Child o’ Mine and Nightrainーall of which were eventually released as hit singles. Estimated to have sold 33,000,000 copies across the world, it has since been given 18x Platinum status by the RIAA.

Riding on their newly found success, they released their second album, G N’ R Lies in November 1988. Featuring a cover that’s a parody of tabloid newspaper, the albums stood out from the brand’s previous effort as it was officially an extended play (although it was treated as a full-length album during its release); its short track list consisted of four hard rock songs, three of which were cover songs of those by Hollywood Rose, Rose Tattoo and Aerosmith. Its acoustic-based tracks a strong follow up to their debut work, G N’ R Lies peaked nicely at number two on the Billboard 200 Chart shortly after its release. Similar to Appetite for Destruction, it also charted in a handful of other countries. A Platinum certified album as of February 1995, it has since sold more than 15 million units in the world.

The band put out their third and fourth studio albums, Use Your Illusion I and Use Your Illusion II in September 1991. Both released at the same time for the Guns N Roses Use Your Illusion tour, they debuted at number two and number one respectively on the Billboard 200, selling 1.4 million copies altogether within the first week. In contrast to their previous hard-rock oriented sounds, the Use Your Illusion series incorporated a blend of heavy metal, classical music, rock and roll and blues and was also much more political in terms of style, than their earlier efforts. Although the two albums fared similarly in the charts, Use Your Illusion II was slightly more popular, having charted at number one on five different charts worldwide. Each certified 7x Platinum by the RIAA, close to 40 million units have been sold combined to date.

Guns N’ Roses released their fifth album entitled, “The Spaghetti Incident?” in November 1993. The band’s only album not to be accompanied with a tour, it also marked Slash’s last collaboration work with the group. Featuring guitarist Gilby Clarke instead of the original Izzy Stradlin, the album mostly consisted of old punk rock covers and hard rock tracks. Positively reviewed, “The Spaghetti Incident?” debuted on the US Billboard 200 at number four and soon sold approximately 190,000 copies during the first week of releaseーa significant drop compared to their earlier albums. As of January 1994, it has been certified Platinum for achieving over one million sales. 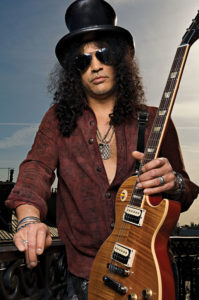 It wasn’t until the spring of 2010 that Slash released his first solo studio album. First announced in his autobiography a few years prior, the self-titled project Slash featured fourteen tracks, all of which featured a musical guest in its vocals. Produced by a team consisting of Big Chris Flores, Kid Rock and Eric Valentine, Slash debuted on the Billboard 200 Chart at number three and achieved close to 61,000 sales in the first week. A relatively huge hit, it also entered the charts at number one in four different countries including Austria, Canada, Sweden and New Zealand. Praised to be “an excellent album” by critics on MTV, it currently holds a nine out of ten rating from Ultimate Guitar and has sold 160,000 copies in the United States. 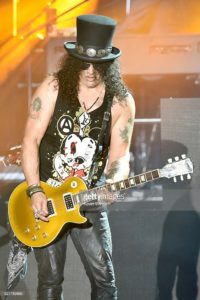 In October 2016, the guitarist did something that had many fans turning their headsーhe put up his original guitar for auction online. One of slash’s beloved instruments in his early Guns N’ Roses Days, the guitar was custom made for the rock musician back in the early 1980’s. Although the exact reason for its selling is unknown, rumours have been circulating that the item has changed hands a few times since Slash first retired it in 1987. Priced at $30,000 to start, it is estimated to bring in at least 60 to 80 thousand dollars once the auction is over!

Back to music, Slash recently reunited with his long-time friends in Guns N’ Roses this April for a 2016 tourーit is also the first time that he performed together with original line-up members Duff McKagan and Axl Rose since the 1993 Use Your Illusion tour. Consisting of three legs, the concerts kicked off at The Troubadour in West Hollywood and has been ongoing, bringing the band across different continents in the world. Spanning fifty nine shows in total, Guns N’ Roses will not only performing in their native North America, but also South America, Central America, Oceania and Asia. According to their schedule, the tour will continue until its last show in Bangkok, Thailand in late February 2017.

If you’d like to stay connected with the rock guitarist of Guns N’ Roses fame, you can follow his online presence on social mediaーyou can find Slash on Instagram (@slash) as well as on Twitter (@slash). Don’t forget to also drop by his official Facebook page and website as well for some of the latest news available!