What Happened to Bjork- News & Updates 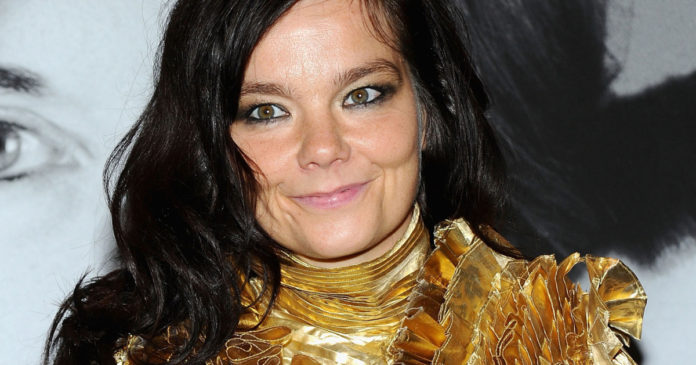 Hailing from Iceland, Bjork is a singer-songwriter who first rose to fame during the 1980’s as the lead vocalist of the rock band, The Sugarcubes. A natural performer, she studied music as a young girl and has received training in both the flute and classical piano. Wanting to make something bigger out of her passion for the tunes, she signed a recording deal with the Islandic record label, Falkinn and released her debut album, Bjork at the tender age of twelve. After many years of singing and performing with various bands, the artist eventually revisited a solo music career in her late twenties, releasing her first  international studio album, Debut in 1993. An immediate hit, it effectively propelled Bjork into stardom outside her native Iceland. With her popularity on the rise, the singer soon followed up with another album, Post in 1995.

Since her career beginnings in the 90’s, the Icelandic singer has released ten albums, and more than thirty singlesーmost of which had found its way onto the charts. A recognized member of the music scene  for over four decades, Bjork has received an uncountable number of awards and nominations form the industry throughout the years. Her collection currently includes five BRIT Awards, four MTV Video Music Awards, four Design and Art Direction Awards, four Danish Music Awards, twenty five Icelandic Music Awards, and three UK Music Video Awards, the list goes on. Besides her list of impressive awards, Bjork is also a fourteen time Grammy Award nominee, a two time Nordic Music Prize nominee, as well as a six time MTV Europe Music Award nominee, amongst others. According to her recording label, the music artist has sold well over 20,000,000 records across the globe to date.

Although not as widely known, the popular Iceland native has also made several appearances on television as an actress. She first step foot in front of the cameras in the television movie, Broken Glass in 1988 at the age of twenty three. Some of the other acting projects which she was involved with include  The Juniper Tree (1990), Ready to Wear (1994), Bjork: It’s Oh So Quiet (1995), Dancer in the Dark (2000), Drawing Restraint 9 (20005) and Dagvaktin (2008). During the mid 1990’s, Bjork was also the presenter of the music variety series, Top of the Pops, a role which she later reprised once again in 2002.

Having said all that, what has the performer been doing with her time as of late? Has the multi-award winning singer recorded any new hits recently? What happened to Bjork? Where is she now in 2018? 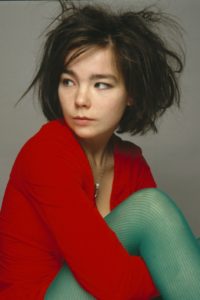 Born on November 21, 1965, in Reykjavik, the largest city of Iceland, Björk Guðmundsdóttir is the daughter of Hildur Rúna Hauksdóttir and Guðmundur Gunnarsson; the former was an activist while the latter was an electrician. Despite having descended from ancestors from the Nordic island nation of Iceland, Bjork harbours distant Irish ancestry. Shortly after her birth, her parents divorced, leading her to have spent most of her life with her mother, whom she lived with in a commune; her mother later remarried to Sævar Árnason, a former band guitarist. Having developed an interest in music, Bjork went to the Reykjavík school Barnamúsíkskóli at the age of six, where she took up classical piano as well as the flute. Recognizing her musical talents, her instructors at the school later recorded the girl’s singing from a recital and sent it off to a local radio station. After being nationally broadcasted, Bjork was eventually approached by a representative of the Falkinn recording label, after which she was offered her first recording deal. At the age of twelve, Bjork released her eponymous debut album, Bjork in December 1977.

In her teen years, the singer formed a number of bands including Spit and Snot, an all-girl punk band and Exodus, a jazz fusion band. After graduating from music school in 1980, she founded another group, Tappi Tikarrass, with whom she later released an EP with in 1982. In 1986, Bjork formed yet another group, a pop band known as the Sugarcubes, alongside Bragi Olafsson, Thor Eldon and Magga Ornolfsdottir; two years later, they released their debut album, Life’s Too Good in 1988, one that would be a hit in both the UK and the US. Having developed a thing for performing with bands, it wasn’t until the early 1990’s that Bjork relocated to London and decided to embark on a solo music career. 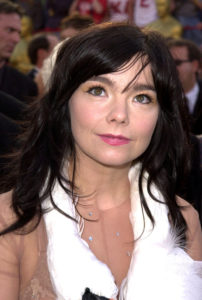 In July 1993, Bjork released her first international full-length album entitled, Debut under the One Little Indian label. Produced in collaboration with Nellee Hooper, it contained a blend of electric pop and trip hop tracks including Human Behaviour, Venus as a Boy, Like Someone in Love and Big Time Sensuality. Critically acclaimed soon after its release, Debut was considered by many to be one of the best albums of the 90’s era. It peaked at number one on the US Top Heatseekers Chart and settled in at number sixty one on the Billboard 200; it also ranked amongst the top ten in several other countries including New Zealand, Sweden and Norway. Debut has since sold over one million copies in the United States.

A couple of years after her debut record, the Icelandic artist released her second studio album, Post in June 1995. In contrast to her earlier discs, it was produced in collaboration with many musicians such as Graham Massey, Howie B and Tricky. Boasting eleven tracks, Post was known to have incorporated many dance and electronic styles into its pieces such as IDM, house and techno. An even bigger sensation compared to her first album, it quickly became one of the best-selling records at the time; it peaked at number two in the UK albums Chart and was included as part of the top ten in over a dozen different international charts. Post later garnered the artist an Icelandic Music Award for “Album of the Year”, “Artist of the Year” “Composer of the Year” as well as “Female Singer of the Year” in 1995.

Before the 90’s came to an end, Bjork released her third international album, Homogenic in September 1997. Featuring a different style, the album contained many tracks which featured both string instruments and the sound of electronic beats. Another success for the singer, Homogenic entered the US Billboard 200 at number twenty-eight and eventually stayed within the top 200 for a period of nine weeks. Given nothing but overwhelmingly positive reviews from critics, the album won multiple awards including an Icelandic Music Award for “Album of the Year” as well as an IFPI Platinum Europe Award. Praised to be Bjork’s “best and most emotional album” yet, it has since sold well over 500,000 copies in the US, earning it Gold Certification from the RIAA. 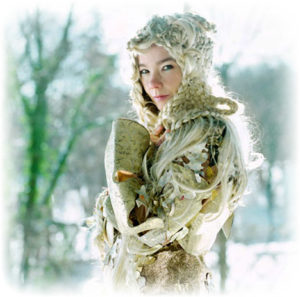 Having cemented her place in the industry, she released her next studio album entitled Vespertine in the summer of 2001. Bjork’s fourth record with One Little Indian, it deviated from her preceding albums in the way that it used instruments such as the celesta, strings, clavichord and the harp. Favourably reviewed by critics for its “sonic experimentation”, Vespertine topped both the US Top Internet Albums and the Top Electronic Albums Charts and secured the nineteenth position on the Billboard 200. Featured in a number of publications during the early 2000’s, the album eventually saw the release of three singles later in the year: Cocoon, Hidden Place and Pagan Poetry.

After having initially struggled with coming up with a title for her fifth album, Bjork released Medulla in August 2004. Named after the latin term for “bone marrow”, it was unique in that its fourteen songs were almost entirely cappellaーthat is, solely vocals without any instrumental accompaniment. Although it was regarded by some as her “most political album”, Medulla was hailed for its distinctive melodies and was generally well receivedーhaving received an A rating from Entertainment Weekly, for instance. It didn’t take long for the album to reach the ninth position on the UK Albums Chart and the fourteenth spot on the Billboard 200. Nominated for two Grammy Award nominations, Medulla has since achieved more than one million sales worldwide.

In May 2007, the Icelandic singer released her sixth studio album entitled, Volta. Although it attracted much attention upon its release, it is overall seen to be Bjork’s weakest-performing album. Volta took the number two spot on the US Rock Albums Chart and the number one position on the US Dance and Electronic Chart. To promote the album, Bjork also embarked on a 18 month long tour, her first in close to four years at the time. Currently holding a 77/100 rating form Metacritic, Volta spawned five singles including Declare Independence, Earth Intruders, Innocence, The Dull Flame of Dust and Wanderlust. Having earned the artist another Grammy Award nomination, the album was later re-released two years later in 2009, with some extra material. Volta is Bjork’s sixth consecutive album to receive a gold or higher certification in the United Kingdom.

Since then, Bjork has gone on to release two more full-length recordsーBiophilia in October 2011 and Vulnicura in January 2015; however unlike her earlier efforts, they would not receive as much widespread success on the charts. 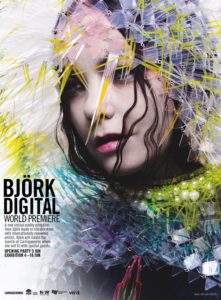 In the last week of September, it was confirmed that the Icelandic singer will be participating in an intimate, homecoming concert as a part of the highly anticipated, Iceland Airwaves Festival. First held in 1999, the annual music event takes place in Reykjavik and lasts for a total of five days every year; its primary focus is to showcase new tunes, both ones that are domestic and international. According to sources, the 2016 Airwaves Festival will be kicking off on November 5, 2016ーit will mark Bjork’s first show in her native country since back in March 2014. The Icelandic singer also isn’t the only one that will be bringing her songs to the stage; other artists invited include Gunnar Jonsson Collider, Sin Fang, Dizzee Rascal and Porunn Antonia.

While that’s still a few weeks away, more recently the singer has been showcasing a few of her new videos for fansーvirtually! Bjork Digital, as it’s called, is an exclusive exhibition show that offers individuals the opportunity to “experience” four videos from the singer’s upcoming tracks. The way it works, is that ticket-holders are led through various VR stations where they’re able to “immerse” themselves in the showcase. A notch up from being an art exhibition, Bjork Digital is truly seems to be a unique and peculiar event, to say the least.

If you’d like to stay connected with the Icelandic star, you can do so easily by catching her on social mediaーyou can find Bjork both on her Twitter (bjork) and Instagram (@bjork) accounts. Don’t forget to also check out her official Youtube Channel for some of the singer’s exclusive videos!