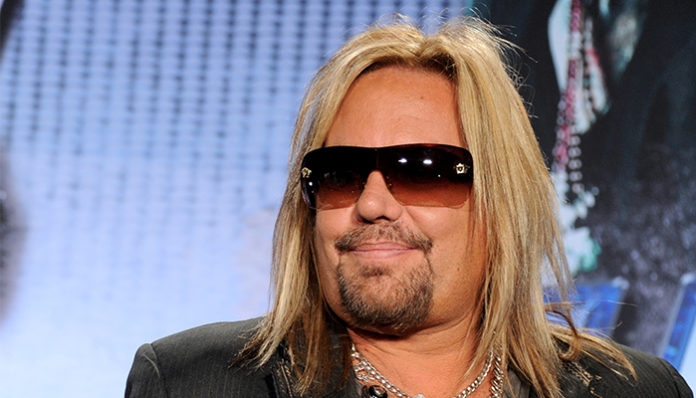 Vince Neil is an American musician best known for his role as lead vocalist in the heavy metal group, Mötley Crüe. Having harboured an interest in music (rock n’ roll in particular) during his teenage years, he soon engrossed himself in the lifestyle during his early twenties in the 1980’s. He took part in multiple local bands, including one called the Rock Candy, which he joined in 1979. It was during one of their performances, that Neil was eventually recruited to join the heavy metal band, Mötley Crüe as their vocalist. A year after the group got together, they recorded and released their debut album, Too Fast for Love in 1981. A huge hit, the album won over millions of heavy metal fans and effectively propelled the band into celebrity stardom. Their debut work was later followed by a second album, Shout at the Devil two years later in 1983.

From there, Neil and the rest of his Mötley Crüe bandmates continued to release a series of albums throughout the 80’s and into the 90’s. One of the most prolific heavy metal bands at the time, the group won numerous awards and nominations including a American Music Award win for the category of “Favourite Heavy Metal/Hard Rock Album”. A three-time Grammy Award nominee, Mötley Crüe was also inducted into the Hollywood Walk of Fame back in 2006. Although the band achieved much success together however, Neil had left the group during the early 90’s to focus his attention on a solo music career. He eventually released his first solo debut album, Exposed in 1993ーfour years after his last collaboration effort with the heavy metal band. Since then, Neil has released two more albums, Carved in Stone in 1995 and Tattoos & Tequila in 2010.

Besides his rock music lifestyle, Neil has actually made a handful of appearances on television and filmーnot as a performer, but as an actor. The former Mötley Crüe vocalist made his debut on the big screen in the 1990 comedy feature film, The Adventures of Ford Fairlane. Since then, he has guest starred in a number of other productions including The Hollywood Starlet Search (1995), Still Standing (2004) and more recently, Sharknado 4: The 4th Awakens (2016). A multi-talented individual, Neil has also participated in several reality game shows including The Weakest Link (2002), Skating with the Stars (2010) and Celebrity Wife Swap (2015), to name a few. Who knew he was such a good skater on ice?

So where has his work brought him to recently? What has he been up to this past little while? What happened to Vince Neil? Where is he now in 2018? 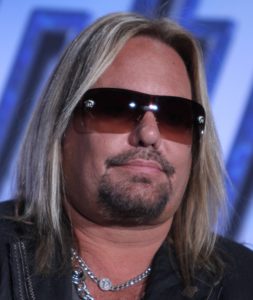 Born on February 9, 1961, in Hollywood, California, Vince Neil Warton is the son of Clois and Shirley Wharton; he is of Native American and Mexican descent. During his early childhood, the family moved often inside the greater Los Angeles area, before settling down in the city of Glendora. As a teen, Neil was a student at Royal Oak High School; it was there that he ultimately met Tommy Lee, his future Mötley Crüe bandmate and long-time friend. Growing up, the young lad had always been more interested in rock ‘n’ roll music than his school life. Unsurprisingly, he was eventually expelled out of school for drug use and fighting. Getting into trouble with his parents, he spent a period of time living in Tommy Lee’s van before getting things back together.

Becoming more and more absorbed in the world of hard rock, Neil soon found himself engrossed in the music scene, joining and performing with various local bands. When he was nineteen, Neil joined a band known as Rock Candy, acting as their vocalist; they later began to tour and perform in a number of clubs in the Los Angeles area. Around that same time, his friend Tommy Lee had recruited a few musician friends together to form a heavy metal band called Mötley Crüe. Although they originally had a vocalist, he later opted out, leaving the group with no one to perform their vocals. Knowing that his friend Neil was a talented vocalist, Lee eventually approached him about leaving Rock Candy to join their band. Although initially hesitant, Neil ultimately decided to join Mötley Crüe after a few months of deliberation, mainly due to the fact that some of his Rock Candy bandmates had taken time off to pursue their own projects. 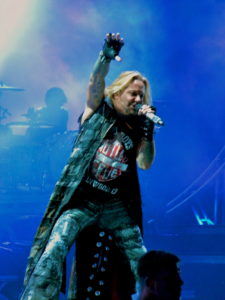 In November 1981, the American heavy metal band released this debut studio album, Too Fast for Love. While the original album was distributed under Leathur Records, it was eventually re-released the following year under Elektra Records. Featuring an album cover that was a tribute to The Rolling Stones’ signature album, Sticky Fingers, its disc featured ten tracks including Live Wire and Stick to Your Guns, which were later released as singles. Debuting at number seventy-seven on the US Billboard 200, the album was met with mediocre success initially in terms of sales, although it had received many favourable reviews from critics. Although it did not fare too well on the charts, it has since sold over one million copies, earning it Platinum certification from the RIAA in the United States.

After their lukewarm hit, Neil and his band released Shout at the Devil in the fall of 1983. Responsible for bringing the group into the limelight, the breakthrough album was significant in the establishing of Mötley Crüe’s place in the heavy metal scene of the 1980’s. Produced by Tom Werman, Shout at the Devil featured eleven different rock tracks, including a cover of The Beatles’ 60’s hit, Helter Skelter. Rated four and a half stars by AllMusic, the heavy metal album peaked at an impressive number seventeen on the Billboard 200; it was also warmly received in Canada where it ranked at number twenty three on the RPM Chart. Hailed to be “metal at its best”, Shout at the Devil eventually spawned three singles: Looks That Kill/Piece of Your Action and Too Young to Fall in Love; they later peaked at number fifty-four and number ninety respectively on the Billboard Hot 100 Chart. A commercial success, Shout at the Devil soon became the band’s first multi-platinum certified album, after having sold an excess of four million copies.

In the early summer of 1985, Mötley Crüe released their third studio album entitled, Theatre of Pain. Dedicated to the Finnish rock band Hanoi Rocks after the passing of its member Nicholas Dingley, the album took a step away from its traditional heavy metal style and instead, focused more on glam metal oriented sounds. Their only album not to include a title track, its ten-song track list included Smokin’ in the Boys Roomーa cover of Brownsville Station’s 70’s hit. Charting at number six on the Billboard 200, Theatre of Pain garnered rave reviews from critics and currently holds a four star rating on Allmusic. The album eventually spawned three singles including Home Sweet Home, Smokin’ in the Boys Room and Keep Your Eyes on the Money (Promo), the second of which peaked at number seven on the US Mainstream Rock Chart.

The band released their next major hit, Girls Girls Girls in May 1987. Revolving around themes of whiskey, strip clubs and Harley Motorcycles, the album was noted for containing a much more “bloused riffed” style tracks compared to the group’s earlier efforts. Certified 4x Platinum by the RIAA as of 1995, the album climbed up to the second position on the Billboard 200 and also made it to number four on the Canadian RPM Albums Chart. Later producing three singles, Girls Girls Girls received a 9/10 rating from Metal Storm and has since sold over four million copies in the US.

In September 1989, Mötley Crüe released their fifth studio album entitled, Dr. Feelgoodーit was also  Neil’s last album with the band before his departure from the group. Their best-performing album to date, Dr. Feelgood has sold over six million copies across the country since it was first released at the end of the 80’s. Produced by Canadian music producer Bob Rock, the record was noted for including vibrant and lush soundsーsomething which the band’s previous releases had been lacking. Praised for its “entertaining values and renewed energy”, Dr. Feelgood was showered with nothing but positive reviews upon its release; it later earned the band two Grammy Award nominations for “Best Hard Rock Performance.” A chart-topper, the album peaked at number one on the Billboard 200 and ranked in the top ten in over half a dozen countries, including Australia, New Zealand, Sweden, Switzerland and Norway. 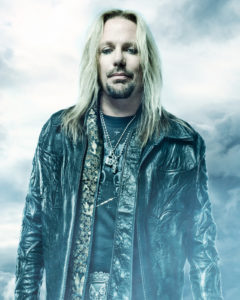 After splitting from Mötley Crüe, Neil released his debut solo album entitled, Exposed in April 1993. Although it wasn’t an instant best-seller, the album did manage to peak at number thirteen on the Billboard 200 Chart. Eleven glam metal tracks were included on the disc including You’re Invited (But Your Friend Can’t Come), Sister of Pain, Can’t Change Me and Can’t Have Your Cake, all of which were later released as singles. Favourably received, Exposed was commended for its jazz guitar solos and admirable atmosphereーtwo things that ultimately earned it a four star rating from critics at Allmusic.

Since then, the former Mötley Crüe member has released two more solo effortsーCarved in Stone in 1995 and Tattoos & Tequila in June 2010. 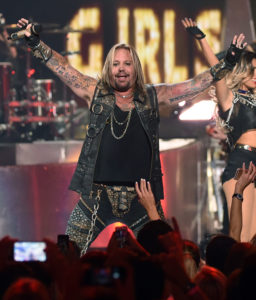 On September 30, 2016, Vince Neil made a special appearance at the opening of the Fright Dome, a haunting attraction at the Adventuredome Theme Park at Circus Circus in Las Vegas, Nevada. For the event, the vocalist dressed up as a priest and was later seen being flanked on stage by “three naughty nuns.” Recognized as one of the best haunted attractions according to the Travel Channel, the five acre Fright Dome will remain open until midnight on October 31, 2016.

In other news, the vocalist recently found himself being sued for assault after being involved in a scuffle with an autograph seeker earlier in April. According to sources, an “aggressive” fan had pushed her through to where Neil and a friend were seated for lunch at the Aria Hotel and Casino. Although Neil admitted later on that he was indeed annoyed at the outburst, he insisted that he did not grab the woman by her hair, as she had claimed (the fan in question had stated that Neil “grabbed her by the hair before jerking her to the ground”). Released at the scene, the heavy metal musician was eventually scheduled to appear in court in June 2016 for the alleged assault.

If you’d like to stay up to date with the former Mötley Crüe member, you can do so by following the rock star on social mediaーyou can find him on Twitter (@thevinceneil) as well as on Instagram (@thevinceneil). Don’t forget to also check out his official Facebook page and website if you’re a fan!