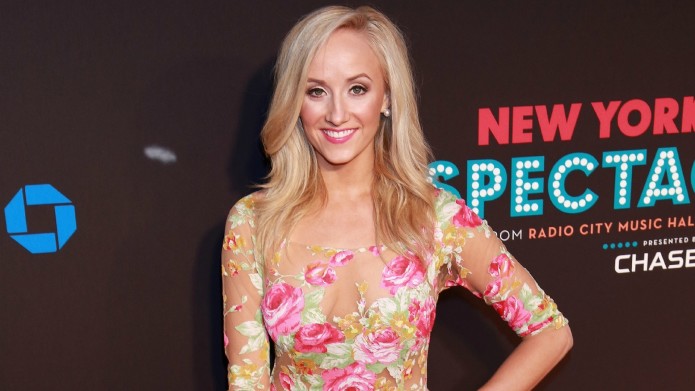 Nastia Liukin was a gymnast with numerous championships and medals earned in her decade-long career. After stepping away from the sport she then focused on other endeavors, but she still exhibits her love for gymnastics through non-competitive appearances.

Before we check out the latest regarding Nastia Liukin, let’s first revisit her life and take a look at her illustrious career in gymnastics.

Anastasia Valeryevna Liukin was born in Moscow, Russia, on October 30, 1989. Gymnastics ran through her veins as her parents Valeri Liukin and Anna Kotchneva were both champions. The family relocated to the United States in 1992 and lived in New Orleans for two years before settling in Texas where Liukin’s father and Yevgeny Marchenko, also a champion gymnast, founded the prestigious gym club World Olympic Gymnastics Academy (WOGA). 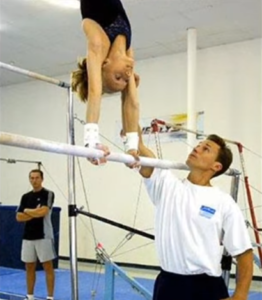 At a young age Liukin’s parents always brought her to the gym while they did coaching work. Initially Liukin only ran around the place and played on the bars until she started to mimic the moves of the gym members. Her folks noticed her talent in the sport but they didn’t want her to pursue a career in gymnastics as they knew too well how difficult it could be. However Liukin’s determination and skill eventually convinced them, and she began competing at six years of age.

After many years of practice Liukin flew to Virginia and participated in the junior elite level of the 2002 U.S. Classic. Despite an injury suffered during the preliminary round Liukin persevered and managed to be placed in the Junior National Team. She scored silver on the balance beam and bronze on the all-around event, behind fellow WOGA teammates Carly Patterson and Hollie Vise who got gold and silver respectively. During the Junior Pan American Championships in the same year Liukin ranked second and her team took home the gold.

2003 saw the start of Liukin’s dominance in the junior level. In the 2003 Pan American Games she bagged silver on all-around, bronze on floor exercise and uneven bars, and gold on the balance beam. Team USA also ranked gold in the competition. In the 2003 U.S. National Championships Liukin got three gold medals and emerged as the winner of the junior division. Her momentum continued through 2004 until she climbed up the ranks of senior in 2005.

Liukin opened 2005 with a bang as she was crowned as the winner of the WOGA Classic. The following month she represented the USA during the American Cup which was her debut in the major international event scene. Liukin put on an impressive performance and managed to win gold on the balance beam, albeit it was a tie with the Chinese gymnast Zhang Nan. April saw Liukin and the USA Women team fly to Europe to compete in dual meets against Switzerland and the United Kingdom. Her team won both competitions while Liukin herself exhibited dominance in the individual parts.

In July she competed at the US Classic after skipping it last year. Liukin performed a quadruple twist, and it was the first time she executed that move in the competitive scene. She bagged the title along with two gold medals for the balance beam and uneven bars. A month later she joined the VISA Championships and bagged three titles plus the second place on floor exercise. Liukin ended the year with two silver and two gold medals in the World Artistic Gymnastics Championships in Australia.

Liukin spent the first few months of 2006 in training, and she also went on tour with her teammates from the championship in Australia to celebrate their achievements and to interact with fans. She returned to competition in March at the Tyson American Cup where she won the top spot of the all-around. In April, at the Pacific Alliance Championships held in Hawaii, Liukin and teammate Chellsie Memmel became joint all-around champs and their team nabbed the gold. She scored a few more gold medals in the US Classic and VISA Championships, and for her efforts Liukin was hailed as “Co-Athlete of the Year” with Memmel. Her father Valeri’s tireless coaching work for his daughter was also given praise with the “Coach of the Year” award. Both accolades were given by USA Gymnastics (USAG).

Liukin underwent training in preparation for the upcoming World Championships in Denmark. Expectations were high in terms of Liukin’s capabilities in taking the gold for the all-around, but she was only limited to the uneven bars after injuring her ankle during training. She got the silver medal for a commendable performance, and same goes for her team as China beat them for the gold. Liukin went back home to Texas for surgery and she spent the remainder of 2006 and the half of 2007 in recovery.

Even with her ankle still not yet fully healed Liukin flew to Brazil and participated in the Pan American Games. Her balance beam and uneven bars performance got her two silvers, and she also contributed to the team’s efforts for the gold. In the VISA Championships Liukin did very well on the bars but suffered from low points on the floor exercises due to a couple of falls. She joined the US team in Germany for the World Championships where they secured the gold. 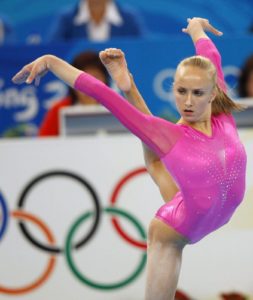 Ever since she was a young girl Liukin marveled at her father’s Olympic medal and drew inspiration from it. Her dream of participating in the biggest sports competition became a reality in 2008, but not before scoring victories at the Pacific Rim Championships and the Tyson American Cup. She flew with the team to China for the Olympic Games and together they won silver. Liukin’s individual performance earned her the prestigious Olympic gold for the all-around, making her the third female American champion for that event.

After her victory in China Liukin was met with numerous accolades, and it also sparked her appearances on magazines, cereal boxes, and television shows. She only competed in the VISA Championships and CoverGirl Classic in 2009, and took a break from the competitive scene in 2010 and 2011 to focus on other matters. Later on she went back to training with the hopes of joining the Olympics in 2012, but she only got to the last night of the qualifying trials. Liukin fell several times on the bars, but despite the failure she was met with thunderous applause and a standing ovation.

Shortly afterwards Liukin announced her retirement from the sport. She still attended the Olympic Games in 2012 as the athlete representative of the Federation of International Gymnasts. Liukin then focused on other ventures like her gymnastics equipment line, girls’ apparel Supergirl, fundraising activities and donations for Hurricane Sandy victims, and publishing her autobiography Finding My Shine (2015). She also works as a motivational speaker from time to time.

After her retirement Liukin enrolled at the New York University and she graduated this year with a degree in sports management.

In 2010 the annual Nastia Liukin Cup had its first run, and for this year it was held last March 04 in Newark, New Jersey. Her father Valeri was appointed as the national team coordinator of USA Gymnastics on September 16, succeeding Martha Karolyi who held the position for 15 years.

During the 2016 Rio Olympics last August, Liukin served as one of the gymnastics commentators alongside Shawn Johnson, a former teammate who was also an Olympic gold medalist.

Liukin is part of the Kellogg’s Tour of Gymnastics Champions which took place September 15 to November 13 in select cities all around the United States. Before the start of the tour she visited the Children’s Hospital & Medical Center in Ohio to promote the tour and to bring smiles to the faces of the young patients.