Dave Vassen started off his pre-roll tape by introducing himself and his family. He and his wife lifted their three-year-old up by her arms as they walked past an idyllic looking lake with ducks in it. Dave told the audience that he was a first generation American, and his South American family came to the United States with nothing but their work ethic. He said that they also taught him the value of an education. The scene switched to an office setting. While on-screen Dave conversed with an employee, narrator Dave said that he began working in education technology after school. He built software platforms for large businesses such as Cisco and Amazon.

Everything changed when his daughter Serena was born. Dave found himself not wanting to go to work, but instead being a part of his daughter’s life, and teaching her new things. He was able to use his educational background to make this a reality for himself. The product he developed, Brightwheel, focuses on early education specifically. He claimed that it lets preschool and daycare teachers connect to their students, as well as the students’ parents. Dave said that investing in early childhood education is important because 85% of brain development occurs before the age of three. He ended the video basically by saying that children are our future, so we should invest in them. 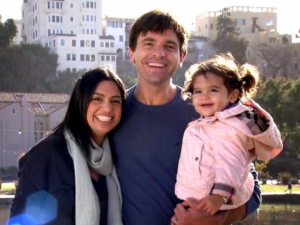 Dave walked out into the Shark Tank, and onto the stage. He introduced himself and told the Sharks that he was seeking $400,000 in investment money in exchange for a 4% equity stake in his company, Brightwheel. Daymond groaned, and you could tell he was already mentally out at that crazy valuation. Dave ignored it, and continued, saying that Brightwheel was an app for daycares, preschools, and families. He claimed to be revolutionizing early education. He addressed the Sharks as fellow parents, and he asked if their young children also had difficulty answering what they did in school that day. Dave illustrated this by showing a clip of a parent asking his preschooler what she did in school, and the little girl answered: “I did everything.”

Dave said that millions of parents had the same experience every day, especially with younger kids. He stated that it was hard to leave your “little human being” for so long every day if that is the only indication of how they did during the day. He said that it was no better on the school end, with teachers managing paperwork and parents, as well as running a business. He claimed that the system is broken, and his app was the solution.

Brightwheel works by allowing teachers to check kids in from the mobile application, and they log updates, and tests to activities and play time throughout the day. The app also allows them to manage their business. Dave stated that they were seeing a huge amount of photos being posted on the app on a daily basis. The teacher takes the picture and tags it, and those are the only two steps in that process. The large screen on the stage showed the teacher’s side of the app. There was a list of students, and at the bottom, Dave picked the activities button. He told the Sharks that each activity was already being tracked on paper, so they’ve just made it into an app for ease for both the teacher and the parent.

Dave clicked on the nap button, which brought up a list of students. He then tagged three of them that “went down for a nap.” Dave stated that the key to the Brightwheel app is that it saved time for the teachers in a measurable way. He switched the onstage screen to the parents’ side of the app. It featured his daughter, Serena, and it went through a list of activities that she completed throughout the day, as well as pictures. Dave claimed that it allowed him to have conversations with Serena when she came home from school since he already had an idea of what she was up to. Dave’s whole relationship with his daughter has changed for the better since making that app.

Dave finished his presentation by telling the Sharks that the business had the potential to become massive, while also making an impact on the lives of children, parents, and teachers. He requested that they join him and Serena in making a difference in every preschool, family, and daycare all over the world. Kevin asked him if he was trying to sell the Sharks on the software platform. Dave said that was the case, and Kevin wondered how much the app cost the consumer. Dave let him know that the app was free, but once they really launched, the teachers or administrator would pay a monthly fee for using the app. Kevin asked if the parents would ever be expected to pay for using the app. Dave told him that he didn’t think that they would have to unless they added more value to the app for parents at a later point.

Kevin informed him that he would not be able to advertise on the Brightwheel platform, and Dave said that he was aware of that. Chris Sacca piped up, saying that Brightwheel had the potential and ability to advertise to parents all they wanted, but Dave said that they did not find that necessary at this time. Dave went on to explain that he started a pilot program for BrightWheel in 2014. Barbara asked how many schools he was able to get signed up, and Dave told her that they started with ten. They used that opportunity to get to know what the schools needed. They began as Brightwheel a year later and signed up 2,500 schools.

Kevin asked how he was planning on monetizing Brightwheel, and Dave dodged the question by saying that other industries had dedicated software like this, and education did not have something like that. Dave saw this as a huge untapped market. Mark said that it mainly had to do with day care and early education centers not having the money or the infrastructure to develop the software. Chris said that those things were very commonly mismanaged. He continued, saying that he thought Brightwheel was a little all over the place, which made it hard to pitch to the Sharks. Dave told him that Brightwheel was used by nannies all the way up to larger early childhood centers so that the price would vary from $40 to $200.

Kevin asked if the $200 price point would apply to places that had 50 kids, and Dave told him that larger centers could have up to 200 children, and it would still be $200 per month. Kevin asked if they raised investor money, and Dave said that Brightwheel raised 2.2 million dollars, and with a $8 million valuation. Daymond asked what he was looking for from an investment from the Sharks. Dave said that he was really looking for the public relations aspect of a Shark partnership. Kevin stated that he thought the idea was interesting but wasn’t sure what Brightwheel could do in terms of monetization. Dave said that they were set to do a million dollars in the next year.

Kevin offered $400,000 in exchange for 10% equity because he brought a lot to the table. Dave told him that he appreciated the offer, but said that his investors have his back. Mark asked him if he came into the Shark Tank knowing that he would have to negotiate, and Dave said that he did. Daymond told him that he did not think that he would be able to add value, so he went out.

Chris asked him how many schools he would have this month, and Dave told him that they were averaging about 40 to 50 schools a day. Chris said that he liked the business, and warned him against counting out advertising to parents altogether as it could benefit Brightwheel in the long run. Chris wanted to make an offer but was wary of paying more than another investor did for the same business. He offered the $400,000 at a 5% equity stake, which was the same valuation as the last round of investment. Dave thanked him for the fantastic offer and asked Chris if he had the desire to team up with the other Sharks.

Chris told him that he was not convinced that the other Sharks would be able to add value above and beyond what Chris himself was bringing to the table. The other Sharks laughed uncomfortably. Chris asked Dave to explain what value adding another Shark would bring to the table. Mark asked if he was serious and if Chris was “really that clueless.” He sounded angry and frustrated. Daymond started chanting “Shark fight! Shark fight!” As Chris and Mark argued amongst themselves. Dave tried to interject, saying that he wanted to take the offer, he was just wondering if they were going to team up with another Shark.

Daymond asked if Dave was planning on ignoring any other offer he got. Dave told him that it wasn’t the case. Chris cut in before Dave could speak, saying that he hasn’t heard any other Shark nominating themselves to come into the deal. Mark heatedly stated that he did not need to appoint himself or convince Chris of anything. Mark said that Chris only has “street cred” in Silicon Valley, and outside of that bubble, it doesn’t count for anything, or, as Mark bluntly put it, it doesn’t mean sh*t. He said he could create brand value in all states, not just California. Kevin interrupted to say that he was the only person with a multimillion dollar company in the education space. Kevin stated that he was willing to match Chris’ deal.

Mark wanted to make a deal. He said that he would do the transaction at $400,000 at 4%, even if it meant teaming up with Chris. Dave asked them to consider going for $300,000 at 4% each. Chris pointed out that it would be paying more than the last investors paid. Dave said that Brightwheel was worth it, which made Daymond cringe. Chris said that he would be willing to do $300,000 and $300,000 at a $9 million valuation. Both Mark and Chris agreed to the deal. Let’s see how that worked out for everyone.

Brightwheel Now in 2018 – The After Shark Tank Update 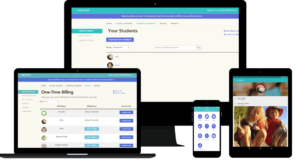 Since appearing on Shark Tank, Brightwheel has been able to make improvements to their app, and really get themselves out there. In late October 2016, Brightwheel went to the NAEYC Annual Conference and Expo in LA to showcase their product with live demonstrations.